Sino-African engagement steered onto stable path - World. The Coordinators' Meeting on the Implementation of Follow-up Actions of the Beijing Summit of the Forum on China-Africa Cooperation, held recently in Beijing, was an important gathering in the process of China-Africa friendly engagement to take the China-Africa comprehensive strategic and cooperative partnership to a higher level. 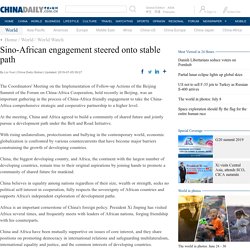 At the meeting, China and Africa agreed to build a community of shared future and jointly pursue a development path under the Belt and Road Initiative. With rising unilateralism, protectionism and bullying in the contemporary world, economic globalization is confronted by various countercurrents that have become major barriers constraining the growth of developing countries. China-Africa cooperation in high gear, powering global growth. Panafricanalliance. China conducts joint medical rescue drill with EU Naval Force in Djibouti - Ministry of National Defense.

Participants from China and the European Union Naval Force (EU NAVFOR) Combined Task Force (CTF) 465 transfer the “injured sailor” during a joint rescue drill at the Chinese PLA Support Base in Djibouti on Oct. 12, 2018. 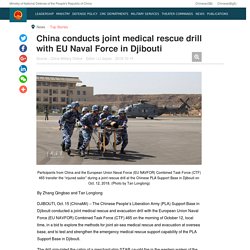 (Photo by Tan Longlong) By Zhang Qingbao and Tan Longlong. China’s Empire of Money Is Reshaping Global Trade. China floods Africa with needed dollars, stoking US concern - SFGate. In this photo provided by China's Xinhua News Agency people gather before a red banner written in English and Chinese set up for the opening ceremony of the African Union Conference Center in Addis Ababa, Ethiopia, on Jan. 28, 2012. 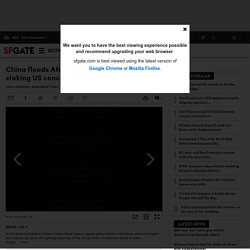 The sleek, green-and-white trains glide past the congested, ragged streets of Addis Ababa along the city’s new light rail _ built and financed by China. The towering silver African Union headquarters here was built by China, too. So was the new ring road system around the city. ‘Significant’ consequences if China takes over Djibouti port, says US general. Where Africa Fits Into China’s Massive Belt and Road Initiative - The Quint. 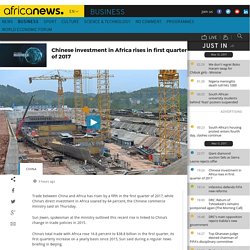 Sun Jiwen, spokesman at the ministry outlined this recent rise is linked to China’s change in trade policies in 2015. China’s total trade with Africa rose 16.8 percent to $38.8 billion in the first quarter, its first quarterly increase on a yearly basis since 2015, Sun said during a regular news briefing in Beijing. Chinese President Xi Jinping announced plans to plough $60 billion into African development projects at a summit in Johannesburg in 2015, saying it would boost agriculture, build roads, ports and railways and cancel some debt. 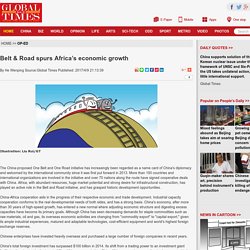 More than 100 countries and international organizations are involved in the initiative and over 70 nations along the route have signed cooperative deals with China. Africa has key role in reviving Silk Road. Beijing - Africa has an important role to play in China’s much-touted One Belt and One Road Initiative, an ambitious plan to revive the old maritime Silk Road, which wields plenty of financial muscle and promises to boost member-countries's growth and economies. 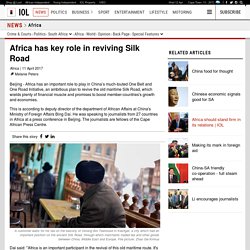 This is according to deputy director of the department of African Affairs at China's Ministry of Foreign Affairs Bing Dai. He was speaking to journalists from 27 countries in Africa at a press conference in Beijing. The journalists are fellows of the Cape African Press Centre. A customer waits for his tea on the balcony of Ostang Boi Teahouse in Kashgar, a city which had an important position on the ancient Silk Road, through which merchants traded tea and other goods between China, Middle East and Europe. Africa: China Becomes Top Job Creator in Africa, Expert Says. Nairobi — China has created close to 30,000 jobs in Africa over the last two years, more than any other country in the world, an expert said on Friday. 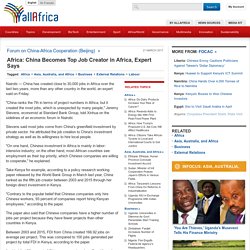 "China ranks the 7th in terms of project numbers in Africa, but it created the most jobs, which is unexpected by many people," Jeremy Stevens, economist at Standard Bank Group, told Xinhua on the sidelines of an economic forum in Nairobi. Stevens said most jobs come from China's greenfield investment by private sector. He attributed the job creation to China's investment strategy as well as its willingness to hire local people. "On one hand, Chinese investment in Africa is mainly in labor-intensive industry; on the other hand, most African countries see employment as their top priority, which Chinese companies are willing to cooperate," he explained. Africa: 200 Chinese and African Companies Identified Investment and Business.

Press release More than 200 Chinese and African companies met in Guangzhou, China, on 14 December to explore business and investment partnerships in the agro-processing and light manufacturing sectors. 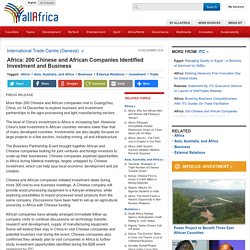 The world's biggest military is about to grow. 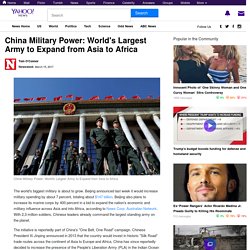 Beijing announced last week it would increase military spending by about 7 percent, totaling about $147 billion. Beijing also plans to increase its marine corps by 400 percent in a bid to expand the nation's economic and military influence across Asia and into Africa, according to News Corp. China steps in to reshape Africa with new railway, Africa News.

DJIBOUTI • The 10.24am train out of Djibouti's capital drew some of the biggest names in the Horn of Africa last month. 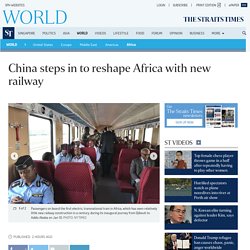 Serenaded by a chorus of tribal singers, the crush of African leaders, European diplomats and pop icons climbed the stairs of the newly built train station and merrily jostled their way into the pristine, air-conditioned carriages making their inaugural run. "It is indeed a historic moment, a pride for our nations and people," said Mr Hailemariam Desalegn, Prime Minister of Ethiopia, shortly before the train - the first electric, transnational railway in Africa - headed towards Addis Ababa, the Ethiopian capital. Chinese companies set their eyes on Nigeria. Investissements chinois en Afrique : hausse de 31% pour cette année – L'Actualité du Burkina Faso 24h/24. China’s Belt and Road initiative to be further fleshed out in 2017.

President Xi Jinping attended the 8th BRICS Summit in Goa, India, with Brazilian President Michel Temer and Russian President Vladimir Putin, Indian Prime Minister Narendra Modi and South African President Jacob Zuma (from left to right), on October 16,2016. Photo: Xinhua China is expected to further promote its Belt and Road initiative next year against the backdrop of rising resentment over globalization and the new Donald Trump administration in the US, as the initiative will be linked with the UN 2030 Agenda for Sustainable Development at a summit hosted by China, experts said.

The coming year will see a summit on the Belt and Road initiative and the ninth BRICS summit, which are two major conferences for China's home field diplomacy, Foreign Minister Wang Yi said in an interview with the People's Daily on Thursday. Belt and Road. Egypt: China, Egypt Pledge to Conjoin Developing Strategies. China is willing to boost cooperation and step up comprehensive strategic partnership with Egypt, a senior Chinese official said here on Thursday.

Wang Jiarui, Vice Chairman of the Chinese People's Political Consultative Conference (CPPCC), made the remarks during his meeting with Egyptian President Abdel-Fattah al-Sisi. "China supports Egypt's efforts to achieve stability and development and is willing to implement consensus reached by both countries' leaders," Wang said.

Moreover, Wang called on both sides to conjoin developing strategies, deepen bilateral cooperation in various areas and push forward the comprehensive strategic partnership between the two countries. Wang also introduced to Sisi recent economic and social developments in China and the spirit of the sixth plenary session of the 18th CPC Central Committee. Chinese standards set new model for China-Africa cooperation. China and Egypt boost ties due to West's failures. President Abdel Fattah Al-Sisi will be in China this week for the run-up to the G20 conference in which Egypt was invited as a guest of honour by Chinese president Xi Jinping during his visit here in January. Egypt will also participate in the follow-up conference, the second Investing in Africa Forum held two days after the G20 conference ends.

This is the second visit by Al-Sisi as Egypt has been attempting to position itself as China’s main partner in Africa. China Central Television (CCTV) stated yesterday that 86 Chinese companies have investments totalling more than $1.1bn in the Suez Canal zone. This move comes as China increasingly seeks to develop land and maritime transport routes from China to Europe and to outsource manufacturing jobs to cheap labour destinations. China's New Plan For Africa At A Glance. Building five cultural centres and providing satellite TV reception to 10,000 African villages is part of the plan. Delegates attending the opening session of the CPCC inside the Great Hall of the People Chinese President Xi Jinping, at the Forum on China Africa Cooperation (FOCAC) summit in December last year announced a new era of China’s relations with the continent built on win-win cooperation and common development. He promised that the relations would henceforth be based on five major pillars of political equality, mutual trust, mutual benefit, cultural exchange and solidarity in international affairs.

What a borderless Africa could mean for China. By Innocent Mutanga. With the rise of nativistic sentiments in the west and rising resistance to globalisation, African states – on the other hand – are embracing what globalization has to offer. Ghana’s Kwame Nkrumah’s Pan-Africanist dream seem to be slowly materialising.

The current efforts by the African Union (AU) to establish a borderless Africa for Africans and the launching of an AU e-passport to allow Africans to visit African countries visa-free are important milestones. This move has been received with mixed feelings among Africans, but what would this move mean for the celebrated Africa-China relations? In this article, I explore some of the things I believe this ‘borderless Africa’ move would mean for China and the Chinese people living in Africa. How China Is Building the Biggest Commercial-Military Empire in History.