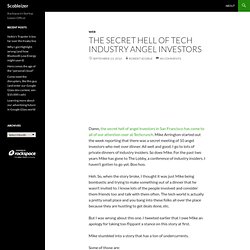 Mike Arrington started out the week reporting that there was a secret meeting of 10 angel investors who met over dinner. All well and good. I go to lots of private dinners of industry insiders. So does Mike. For the past two years Mike has gone to The Lobby, a conference of industry insiders. Heh. So A Blogger Walks Into A Bar… Yesterday I was tipped off about a “secret meeting” between a group of “Super Angels” being held at Bin 38, a restaurant and bar in San Francisco. 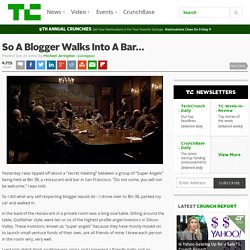 “Do not come, you will not be welcome,” I was told. So I did what any self respecting blogger would do – I drove over to Bin 38, parked my car and walked in. in the back of the restaurant in a private room was a long oval table. Sitting around the table, Godfather style, were ten or so of the highest profile angel investors in Silicon Valley. Who are the Super Angels that Michael Arrington is talking about in his 9/21/10 Techcrunch post, "So a Blogger Walks into a Bar..."

Here's Who Was At That Secret Valley Super-Angel Collusion Meeting. Hooray For Mike Arrington. Collusion. Mike Arrington posted about a secret meeting of angels and super angels in San Francisco the other night. 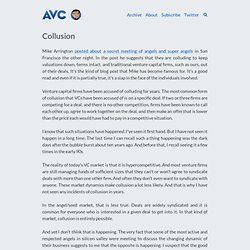 In the post he suggests that they are colluding to keep valuations down, terms intact, and traditional venture capital firms, such as ours, out of their deals. It's the kind of blog post that Mike has become famous for. It's a good read and even if it is partially true, it's a slap in the face of the individuals involved. Fire in The Valley, Fire in My Belly... and Yes, Mike, I Have Stopped Beating My Wife. So i've been debating whether to write this post all day. 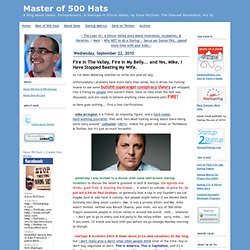 Unfortunately i probably have more balls than sense, but it drives me fucking insane to see some bullshit superangel conspiracy theory get whipped into a frenzy by people who weren't there, have no idea what the hell was discussed, and are ready to believe anything when someone yells FIRE! So here goes nothing... first a few clarifications: - mike arrington is a friend, an imposing figure, and a hard-nosed, hard-working journalist. that said, he's dead fucking wrong about there being some story around " collusion" (def'n). makes for great red meat on TechMeme & Twitter, but it's just so much horseshit. AngelGate Is “100 Percent Accurate,” Says Michael Arrington. Last night, TechCrunch’s Michael Arrington reported that on Monday night, a group of high-profile Silicon Valley angels met at a San Francisco restaurant, where, Arrington said he later learned, “collusion” and “price fixing” were on the menu. 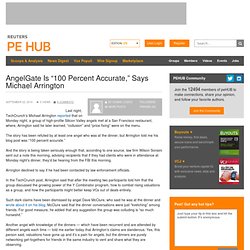 The story has been refuted by at least one angel who was at the dinner, but Arrington told me his blog post was “100 percent accurate.” And the story is being taken seriously enough that, according to one source, law firm Wilson Sonsini sent out a note this morning, advising recipients that if they had clients who were in attendance at Monday night’s dinner, they’d be hearing from the FBI this morning. Arrington declined to say if he had been contacted by law enforcement officials. Can we trust Michael Arrington? (AngelGate) « Derek Andersen. Collusion in Silicon Valley Investing? Michael Arrington, the TechCrunch founder and blogger, threw a bombshell into Silicon Valley with a blog post on Tuesday night, accusing the Valley’s top angel investors of colluding to reduce the price of investing in tech start-ups and keep competitors from investing.

Now, a few of the angel investors are firing back. In his post, Mr. Arrington said he was tipped off about a secret meeting of the Valley’s most prominent angel investors at a San Francisco restaurant. He stopped by, unannounced, and was met with deafening silence, he wrote. He left, having gathered nothing from the group. Angelgate is overblown! I like a good conspiracy theory as much as the next guy and some of the Hitler Angelgate parodies are really funny, but the alleged attempted collusion is a nonissue if only because even if the super angels tried to collude they would be bound to fail. 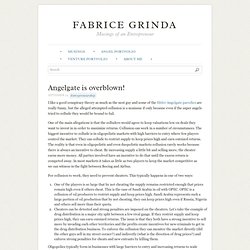 One of the main allegations is that the colluders would agree to keep valuations low on deals they want to invest in in order to maximize returns. Collusion can work in a number of circumstances. The biggest incentive to collude is in oligopolistic markets with high barriers to entry where few players control the market. They can collude to restrict supply to keep prices high and earn outsized returns.

Chris dixon: where's my invite! :) RT @... #AngelGate in Europe? We should be so lucky. Here in Europe we’ve been fascinated by what has become known as AngelGate. 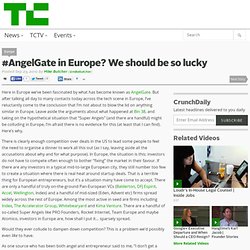 But after talking all day to many contacts today across the tech scene in Europe, I’ve reluctantly come to the conclusion that I’m not about to blow the lid on anything similar in Europe. Leave aside the arguments about what happened at Bin 38, and taking on the hypothetical situation that “Super Angels” (and there are handful) might be colluding in Europe, I’m afraid there is no evidence for this (at least that I can find). Here’s why. There is clearly enough competition over deals in the US to lead some people to feel the need to organise a dinner to work all this out (as I say, leaving aside all the accusations about why and for what purpose).

Finger-Pointing, Emails, Deleted Tweets, Rage. AngelGate Is Far From Over. Ron Conway Drops A Nuclear Bomb On The Super Angels [Email] Ron Conway Would Like To Clarify His Nuclear Attack On Fellow Angels. AngelGate: Chris Sacca Responds To Ron Conway. As I said the other day, there would be more private emails getting published. 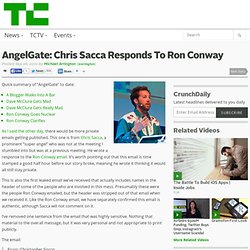 This one is from Chris Sacca, a prominent “super angel” who was not at the meeting I stumbled into but was at a previous meeting. He wrote a response to the Ron Conway email. It’s worth pointing out that this email is time stamped a good half hour before our story broke, meaning he wrote it thinking it would all still stay private. This is also the first leaked email we’ve received that actually includes names in the header of some of the people who are involved in this mess. Presumably these were the people Ron Conway emailed, but the header was stripped out of that email when we received it. I’ve removed one sentence from the email that was highly sensitive. I mention Ron last only because this one gets a little emotional for me. That said, I am having a hard time resolving the person I quite literally grew up with in this business, with the person who sent the email to which I am replying.

How AngelGate Affects You...Yes, You. In an overcrowded world of mortal human beings, struggling with scarcity and inequities, networked technology can extend the reach and vision of any of us individually - beyond the wildest dreams of most of human history. 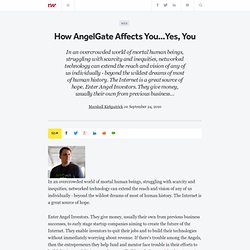 The Internet is a great source of hope. Enter Angel Investors. They give money, usually their own from previous business successes, to early stage startup companies aiming to create the future of the Internet. They enable inventors to quit their jobs and to build their technologies without immediately worrying about revenue. If there's trouble among the Angels, then the entrepreneurs they help fund and mentor face trouble in their efforts to build the future of the internet that we will all benefit from. Adolf Hitler Finds Out Bin 38 AngelGate.