Tower - The most powerful Git client for Mac 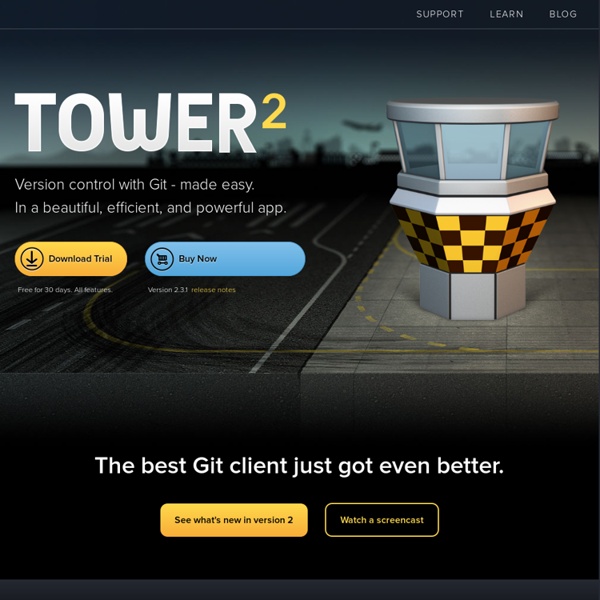 iCompta : Logiciel de comptabilité personnelle gratuit pour Mac Mockups | Balsamiq Take a second. Let it sink in. The first impression might be disorienting. Getting your ideas out should be effortless. We've been in business long enough that we think we have learned enough about ourselves, our product, our customers and our competitive space to be able to put a stake in the ground and tell the world what we're about. Our sweet spot: the ideation phase Mockups really shines during the early stages of designing a new interface. Mockups is zenware, meaning that it will help you get "in the zone", and stay there. Mockups offers the same speed and rough feel as sketching with pencil, with the advantage of the digital medium: drag & drop to resize and rearrange elements, make changes without starting over, and your work is clear enough that you'll make sense of them later. See what you can build with Mockups Skin: Download the samples above, or find more on Mockups To Go, our community-contributed stencils site. Designed for collaboration Ready to try it out? Learning UX Design

Aha! Moments When Learning Git Git is a fast, flexible but challenging distributed version control system. Before jumping in: Along with a book, tutorial and cheatsheet, here are the insights that helped git click. There's a staging area! Git has a staging area. Yowza, did this ever confuse me. git add foo.txtAdd foo.txt to the index. Why stage? But now there's two undos: git checkout foo.txtUndo local changes (like svn revert)git reset HEAD foo.txtRemove from staging area (local copy still modified). Add and commit, add and commit -- Git has a rhythm. Branching is "Save as..." Branches are like "Save as..." on a directory. Easily merge changes with the original (changes tracked and never applied twice)No wasted space (common files only stored once) Why branch? Imagine virtual directories I see branches as "virtual directories" in the .git folder. My inner dialogue is "change to dev directory (checkout)... make changes... save changes (add/commit)... change to master directory... copy in changes from dev (merge)". Local data

Synium iMZDL: iOS 7 & OS X 10.9 — Your source for iOS and OS X betas! Understanding Git Conceptually Introduction This is a tutorial on the Git version control system. Git is quickly becoming one of the most popular version control systems in use. There are plenty of tutorials on Git already. How is this one different? A Story When I first started using Git, I read plenty of tutorials, as well as the user manual. After a few months, I started to understand those under-the-hood concepts. Understanding Git The conclusion I draw from this is that you can only really use Git if you understand how Git works. Half of the existing resources on Git, unfortunately, take just that approach: they walk you through which commands to run when, and expect that you should do fine if you just mimic those commands. This tutorial, then, will take a conceptual approach to Git. Go on to the next page: Repositories

Irradiated Software - SizeUp SizeUp Powerful, keyboard-centric window management SizeUp allows you to quickly resize and position your windows with keyboard shortcuts or a handy menu bar icon. Why You Need SizeUp for Window Management Arranging windows on Mac OS X is tedious and imprecise. SizeUp will help you quickly resize and position your windows to make optimal use of your screen while saving you time and frustration. SizeUp at Your Command SizeUp comes with a number of pre-defined actions for resizing and/or moving the frontmost window of almost any application. Safari, Finder, Pages, it doesn't matter, SizeUp will work its magic to help wrangle your windows into place. Split Screen Actions Move and resize a window to fill the Left, Right, Top (Up), or Bottom (Down) half of the screen. Great for putting two windows side by side for comparison. Quarter Screen Actions Move and resize a window to fill a quarter of the screen (quadrant). Great for managing files in Finder. Multi-Monitor & Spaces Actions Other Actions Margins

software. systems. solutions. » Archive » Fixing Snow Leopard 10 Monday, 5. April 2010 June 21, 2010 Update: Apple appears to have solved the problem for many of us with the release of Snow Leopard 10.6.4. To save you time I’ll give you the solution first then describe how I found it: Turn off Unix extensions in your Samba server by adding the following line to smb.conf in the global settings block and then restart Samba: unix extensions = no You might also need to unmount and re-mount your Samba volumes from OS X after you make this change. After installing the OS X Snow Leopard 10.6.3 update I found that I could no longer write to Samba (SMB) volumes shared from my Linux server (running Ubuntu 9.10 Karmic Koala) that I had mounted on OS X. The operation can’t be completed because you don’t have permission to access some of the items. Apparently a lot of other people are having the problem as well: I couldn’t find the solution anywhere on Google, and I spent hours today searching.