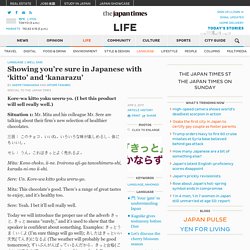 (I bet this product will sell really well.) Situation 1: Mr. Mita and his colleague Mr. Sere are talking about their firm’s new selection of healthier chocolates. Cost of Living in Japan - Blog. Japan is said to have one of the highest costs-of-living in the world but what do people actually spend their money on and how much do they spend? 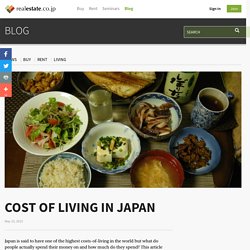 This article looks at what households in Japan actually spend in a month in various categories. The data is taken from the Japanese Ministry of Internal Affairs and Communications’ “Household Finance Survey” for 2014. The data we’re summarizing below is specifically for households where there are at least two members, and where the head of household is working (for a company, the government, in a factory or a shop/store). Of note is that the Ministry specifically excludes foreign residents from its survey group, so this information reflects what Japanese households spend.

However, we put up this post to give readers a general idea of what locals (in different parts of Japan) spend for food, utilities, transportation, and entertainment, etc. Average Monthly Expenditures. Japanese Expressions: Learn Real Japanese from Manga for Free. Do you like Japanese manga? 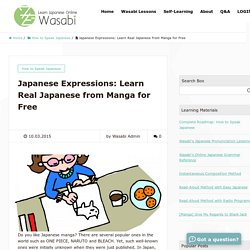 There are several popular ones in the world such as ONE PIECE, NARUTO and BLEACH. Yet, such well-known ones were initially unknown when they were just published. In Japan, there are tens of thousands of cartoonists who are writing manga with the hope of being popular like ONE PIECE and making their work available on the internet for free. Login - Memrise. The 15 Best Books to Learn Japanese for Any Skill Level. Alright, you hooligan. 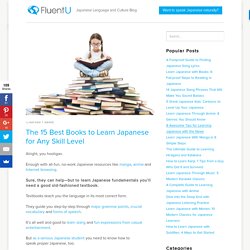 Enough with all-fun, no-work Japanese resources like manga, anime and Internet browsing. Sure, they can help—but to learn Japanese fundamentals you’ll need a good old-fashioned textbook. Textbooks teach you the language in its most correct form. They guide you step-by-step through major grammar points, crucial vocabulary and forms of speech. It’s all well and good to learn slang and fun expressions from casual entertainment. But as a serious Japanese student you need to know how to speak proper Japanese, too. What’s gonna happen during that dream job interview in Tokyo when you can’t even summon the grammatical knowledge to speak humbly to your superiors? Japanese Vocabulary Quizzes (JavaScript) Adjectives. Posted by Tae Kim Properties of Adjectives Now that we can connect two nouns together in various ways using particles, we want to describe our nouns with adjectives. 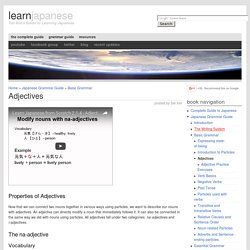 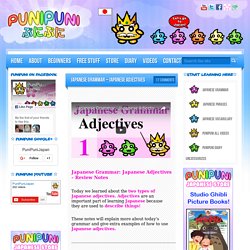 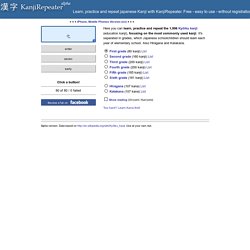 Kanji stroke order diagrams. <div class="nojavascript"><p>This page uses JavaScript, but JavaScript does not seem to be available in your browser. 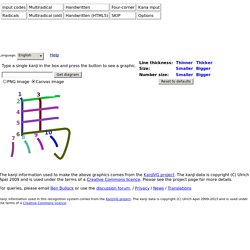 I apologize for the inconvenience, but please try either switching on your browser's JavaScript, or visit again with a different browser. </p></div> Language: Help The kanji information used to make the above graphics comes from the KanjiVG project. The kanji data is copyright (C) Ulrich Apel 2009 and is used under the terms of a Creative Commons licence. For queries, please email Ben Bullock or use the discussion forum. / Privacy / News / Translations Kanji information used in this recognition system comes from the KanjiVG project. Kyōiku kanji - Wikipedia. Kyōiku kanji is a subset of Jōyō kanji. 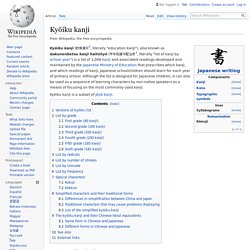 Example sentences including 触れる. Appendix:1000 Japanese basic words. This appendix is a specific list of one thousand basic words. 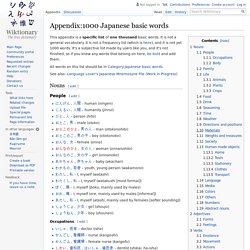 It is not a general vocabulary. It is not a frequency list (which is here), and it is not yet 1000 words. It's a subjective list made by users like you, and it's not finished, so if you know any words that belong on here, be bold and add them. Who are the nomads? - Notes of Nomads. We’re Jessica & Hai, a married international couple travelling the world and reinventing our idea of home. Countries travelled: 50+ Current home: Tokyo, Japan Jessica Hi, I’m Jessica.

I consider myself one and a half generation Australian since my father was born in Amsterdam and my mother was an Australian-born daughter of Dutch migrants. Despite my Dutch ancestry and the fact that both my parents only spoke Dutch until they started school in Australia and had no choice but to learn English fast, we never spoke Dutch at home. Retracing my ancestry. ねずみのよめいり(Mouse's marriage) にほんご＆English Translation version 002 Translation Liana Kerr ＜ふくむすめどうわしゅう Hukumusume fairy tale collection＞

好 (Kanji for like) Japanese Rule of 7. Tae Kim's Guide to Learning Japanese. Let's read some blogs! Have you ever read a blog written by a native Japanese speaker? Making good use of blogs is a sure-fire way to boost your Japanese level. By reading new sentences every day, even if only just a few, you can enhance your vocabulary and your reading ability too. Also, you can familiarise yourself with a natural style of Japanese. However, often when learners actually try looking at a blog written by a Japanese person, they are overwhelmed when they find there are lots of kanji they can't read, and lots of expressions they don't understand, meaning that to continue reading every day seems like an uphill struggle!

Japanese Level Up - Your Adventure. Your Quest. Make It Memorable. JAPANESE FOR BUSY PEOPLE Rosa's blog⇔Rosa's daily life. 12月28日. Let's read some blogs! Google. Zooming Japan (Travel Guide & Photos) Making Friends in Japan - Japanese Rule of 7. People say Japan’s a lonely place. But people say a lot of things, including that America’s the greatest nation on earth. Well, they do have a lot of eagles, cheeseburgers, and guns, so I guess it must be true. Anyway, recently a reader asked if it was hard to make friends in Japan, to which I’m tempted to answer “well, yes and no.”

But since that’s the world’s most dickish answer, I’ll just go with “yes.” Yes, it is, for a few simple reasons. By way of illustration, let me first tell you about my good friend, Imada-san. So the other day I met him and his wife at the station. “Imada-san,” I greeted her in English, “how’s it going? “I’m going shopping,” she answered proudly. Japanese Phrases. Japanese Phrases Trying to find some Japanese phrases? たいせつな どうし100. Language. What kind of language is Japanese? In this section you can take Japanese lessons and try speaking the language.

You can also learn the characters used to write Japanese. Why not do the lessons with a friend and try speaking Japanese to each other? Learn basic phrases that people use everyday. You can practice them yourself after hearing how they're pronounced. Lesson 1: Learn a Language with Videos.