A Model of the Cosmos in the ancient Greek Antikythera Mechanism. The newly-discovered periods for Venus and Saturn are unknown from studies of Babylonian astronomy. 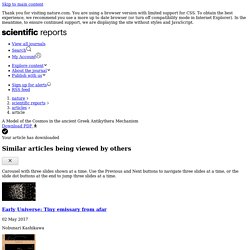 Figure 2 explores how these periods might have been derived. Clues came from the Babylonian use of linear combinations of periods designed to cancel out observed errors14. Figure 2a shows how this might generate the periods for Venus and Saturn, but choosing the correct linear combinations essentially uses knowledge about errors in known period relations relative to the true value. The lack of fine error-estimates from antiquity excludes these methods for our model: errors like < 1° in 100 years for (720, 1151) were beyond the naked-eye astronomy of the Hellenistic age.

'Super bacteria' survive for three years outside space station. Pentagon releases UFO videos for the record. Media playback is unsupported on your device The US Department of Defense has released three declassified videos of "unexplained aerial phenomena". 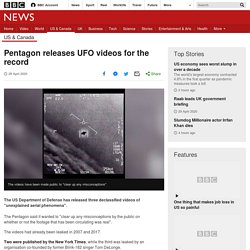 Dancing gargantuan black holes perform on cue. Media playback is unsupported on your device Astronomers have been able to test key consequences of Einstein's theories by studying the way a couple of black holes move around each other. 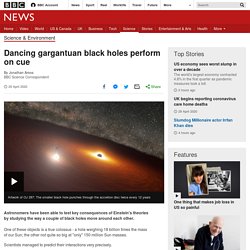 One of these objects is a true colossus - a hole weighing 18 billion times the mass of our Sun; the other not quite so big at "only" 150 million Sun masses. Scientists managed to predict their interactions very precisely. They did so by including their warping effects on space-time and by assuming the larger hole had a smooth "surface". The black hole pairing, known as OJ 287, exists about 3.5 billion light-years from Earth. Scientists have long recognised a sudden brightening from this system that occurs twice every 12 years. ISS crew blast off after long quarantine. Image copyright Getty Images Three new crew members have arrived at the International Space Station (ISS) after a launch carried out under tight restrictions due to the coronavirus. 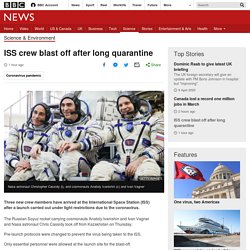 The Russian Soyuz rocket carrying cosmonauts Anatoly Ivanishin and Ivan Vagner and Nasa astronaut Chris Cassidy took off from Kazakhstan on Thursday. Could the Big Bang have created a hidden 'twin' Universe? - BBC Reel. The biggest questions about life, the Universe and everything - and how to answer them. 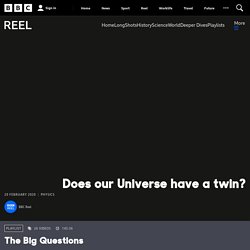 Does our Universe have a twin? Leap years and why we need them. Docking gives Intelsat telecoms satellite new lease of life. Image copyright Northrop Grumman Two American satellites have docked high over the Atlantic in a demonstration of what many commentators expect to be a burgeoning new industry. 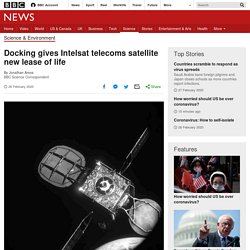 One of the platforms is an old telecoms spacecraft low on fuel; the other is an auxiliary unit that will now take over all the former's manoeuvring functions. This will allow Intelsat-901 to extend its 19-year mission of relaying TV and other services by another five years. The event has been described as a major accomplishment by the firms involved. Northrop Grumman, which produced the Mission Extension Vehicle-1 that grabbed hold of Intelsat-901, said it was the first time two commercial satellites had come together in this way at an altitude of just over 36,000km.

MEV-1 will now push IS-901 to an equatorial position at 27.5 degrees West so it can resume telecoms duties in late March or early April. How Big Is Space – Interactive version. ‘It was an honor’: NC doctor saves astronaut at space station suffering from blood clot. Stars align for epic space missions. Image copyright ESA Two of the most exciting space missions of the 2030s are likely now to be launched within a year of each other. 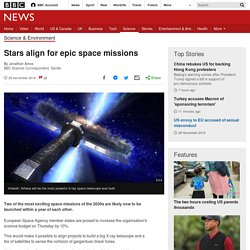 European Space Agency member states are poised to increase the organisation's science budget on Thursday by 10%. This would make it possible to align projects to build a big X-ray telescope and a trio of satellites to sense the collision of gargantuan black holes. James Webb Space Telescope comes together. Image copyright NASA/Chris Gunn The successor to the Hubble observatory has reached a key milestone in its construction. 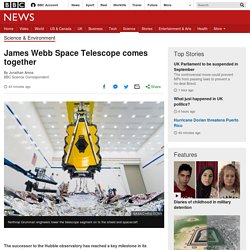 All the elements that make up the James Webb Space Telescope (JWST) have been brought together for the first time. It sets the stage for some critical tests that will hopefully lead to a launch to orbit sometime in 2021. Milky Way galaxy is warped and twisted, not flat. Image copyright OGLE/Warsaw UNiversity Our galaxy, the Milky Way, is "warped and twisted" and not flat as previously thought, new research shows. 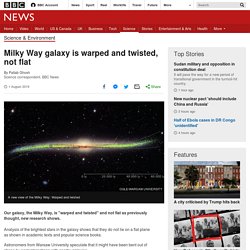 Analysis of the brightest stars in the galaxy shows that they do not lie on a flat plane as shown in academic texts and popular science books. Astronomers from Warsaw University speculate that it might have been bent out of shape by past interactions with nearby galaxies. Moon landings: What was the 1969 Apollo 11 mission? Image copyright Reuters It's nearly 50 years since the US became the first country to land men on the Moon. 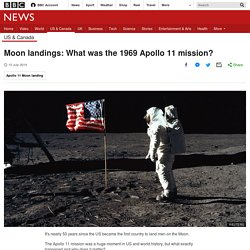 The Apollo 11 mission was a huge moment in US and world history, but what exactly happened and why does it matter? Why did the US want to go to the Moon? A space race developed between the US and the then Soviet Union, after the 1957 launch of the first Soviet Sputnik satellite. When John F Kennedy became US President in 1961, many Americans believed they were losing the race for technological superiority to their Cold War enemy. Image copyright Getty Images It was in that year that Soviet Union made the first ever manned spaceflight. The US was determined to get a manned mission there first and in 1962 Kennedy made a now-famous speech announcing: "We choose to go to the Moon! " The CubeSat revolution changing the way we see the world. Image copyright Alamy There is a beloved story about the dimensions of the space shuttle.

Apparently the booster rockets had to fit through railway tunnels designed to accommodate a horse and cart. Neil Armstrong's son talks about the Moon landing. Apollo 11: Four things you may not know about the first moon landing. Image copyright NASA Fifty years on, the Apollo Moon programme is probably still humankind's single greatest technological achievement. On 16 July 1969, astronauts Neil Armstrong, Buzz Aldrin and Michael Collins were strapped into their Apollo spacecraft on top of the vast Saturn V rocket and were propelled into orbit in just over 11 minutes.

50 astronauts, in their own words. Jeff Bezos unveils Moon lander concept. Image copyright Reuters Amazon entrepreneur Jeff Bezos has unveiled a mock-up of a new lunar lander spacecraft that aims to take equipment and humans to the Moon by 2024. The unmanned, reusable Blue Moon vehicle will carry scientific instruments, satellites and rovers. It will feature a new rocket engine called BE-7 that can blast 10,000 pounds (4,535 kg) of thrust. "It's time to go back to the Moon, this time to stay," said Mr Bezos.

Mr Bezos presented the Moon goals of his space exploration company Blue Origin at the Washington Convention Center in Washington DC, to an audience consisting of potential customers and officials from Nasa. Why water is one of the weirdest things in the universe - BBC Ideas. An Easter treat: Is our universe egg shaped? - BBC Ideas. First ever black hole image released. Image copyright EHT Astronomers have taken the first ever image of a black hole, which is located in a distant galaxy. It measures 40 billion km across - three million times the size of the Earth - and has been described by scientists as "a monster". The black hole is 500 million trillion km away and was photographed by a network of eight telescopes across the world.

Details have been published today in Astrophysical Journal Letters. Hayabusa-2: Japanese probe likely to have 'bombed' an asteroid. Image copyright Akihiro Ikeshita The Japanese Hayabusa-2 spacecraft is thought to have detonated an explosive charge on the asteroid it is exploring. Its mission is to create an artificial crater on the asteroid Ryugu. If this is successful, it will later return to gather samples of the asteroid, which could help scientists understand how Earth was formed in the early Solar System.