Travel - Trang: the Thai city obsessed with breakfast. It was almost midnight in the southern Thai city of Trang, and I was staring into an oven the size of a tuk-tuk. 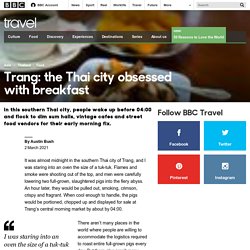 Flames and smoke were shooting out of the top, and men were carefully lowering two full-grown, slaughtered pigs into the fiery abyss. An hour later, they would be pulled out, smoking, crimson, crispy and fragrant. When cool enough to handle, the pigs would be portioned, chopped up and displayed for sale at Trang’s central morning market by about by 04:00. 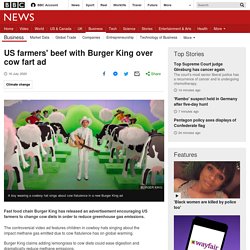 The controversial video ad features children in cowboy hats singing about the impact methane gas emitted due to cow flatulence has on global warming. Burger King claims adding lemongrass to cow diets could ease digestion and dramatically reduce methane emissions. But farm leaders say the ad is "condescending and hypocritical".

Coronavirus panic: Why are people stockpiling toilet paper? Image copyright Getty Images Perhaps the worst doomsday scenario is this: being stuck on the toilet and finding you're down to the last square. 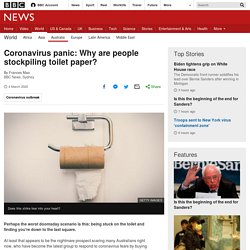 At least that appears to be the nightmare prospect scaring many Australians right now, who have become the latest group to respond to coronavirus fears by buying toilet paper en masse. This is despite authorities stressing there is no shortage - given most of the nation's rolls are made locally. However in Sydney, the nation's largest city, supermarket shelves have been cleared in minutes, forcing one chain to enforce a four-pack buying limit.

Police were even called to a dispute on Wednesday, with reports saying a knife was pulled out in an argument over toilet roll between panic buying shoppers. 'Leaplings' celebrate their real birthdays. In pictures: The battle of the oranges. Image copyright Andrea Capello. 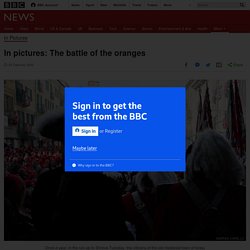 'I live in a Gaudi building visited by a million tourists each year' 'Get robbed in Rio': Brazil tourist board mistakenly publish rant. Image copyright Getty Images Come for sunshine, beaches and the violent crime is not the typical message a tourist board broadcasts. 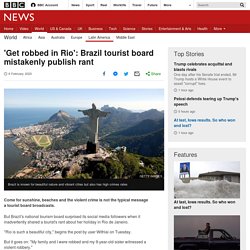 But Brazil's national tourism board surprised its social media followers when it inadvertently shared a tourist's rant about her holiday in Rio de Janeiro. "Rio is such a beautiful city," begins the post by user Withlai on Tuesday. But it goes on: "My family and I were robbed and my 9-year-old sister witnessed a violent robbery. " Mexican ambassador caught shoplifting book resigns citing health problems. Image copyright Getty Images Mexico's ambassador to Argentina has resigned amid new allegations of theft, after video previously emerged of him attempting to shoplift a book. 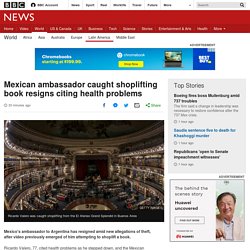 Ricardo Valero, 77, cited health problems as he stepped down, and the Mexican foreign minister said he was undergoing neurological treatment. Mr Valero was recalled this month after CCTV showed him taking a book from a Buenos Aires shop without paying. He is now accused of the attempting to steal a shirt from an airport shop. Social media awash with scorn for 'sloping toilet' Image copyright StandardToilet A toilet designed to slope downwards slightly, making it uncomfortable to sit on for more than a few minutes, has been pooh-poohed on social media. 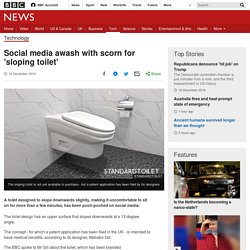 The toilet design has an upper surface that slopes downwards at a 13-degree angle. 'Ice eggs' cover Finland beach in rare weather event. Image copyright Risto Mattila Thousands of egg-shaped balls of ice have covered a beach in Finland, the result of a rare weather phenomenon. 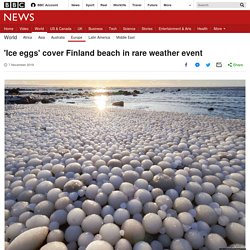 Amateur photographer Risto Mattila was among those who came across the "ice eggs" on Hailuoto Island in the Gulf of Bothnia between Finland and Sweden. Experts say it is caused by a rare process in which small pieces of ice are rolled over by wind and water. Mr Mattila, from the nearby city of Oulu, told the BBC he had never seen anything like it before. Online critics poke fun at Canada 'warship' library. 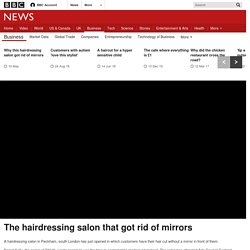 Handsome Her: Australian vegan café to close after ‘man tax’ furore. Image copyright @paigecardona A vegan café in Australia that levied a tax on male customers is to close after becoming the "punching bag of the internet". Handsome Her was accused of reverse sexism after opening in Melbourne in 2017. Its owners provoked debate by offering women priority seating and charging men an extra 18% one week a month. Although non-compulsory, the "man tax" reflected "the gender pay gap", the owners said. Letter from Africa: The art of drawing your address in The Gambia. In our series of letters from African journalists, Sierra Leonean-Gambian writer Ade Daramy explains why it is easy to get lost in The Gambia.

"Turn right at the red shipping container, opposite the school on the highway, you'll see two roads, take the one to the right and then left at the unpainted corner shop at the second junction... " This is part of what passes for giving directions to an address in many parts of The Gambia. Once you leave the capital, Banjul, and head into the surrounding cities, you find yourself struggling to find anything more than a few named streets. When I went online to look at maps of the country, the full horror of the situation dawned on me: there are hundreds, possibly thousands, of nameless streets. I have often wondered whether Irish rock band U2 were actually thinking of The Gambia when they wrote their hit Where the Streets Have No Name. An Easter treat: Is our universe egg shaped? - BBC Ideas. Aphantasia: Ex-Pixar chief Ed Catmull says 'my mind's eye is blind' Image copyright Pixar The former president of Pixar and Walt Disney Animation Studios says he has a "blind mind's eye".

Most people can close their eyes and conjure up images inside their head such as counting sheep or imagining the face of a loved one. But Ed Catmull, 74, has the condition aphantasia, in which people cannot visualise mental images at all. And in a surprising survey of his former employees, so do some of the world's best animators. Ed revolutionised 3D graphics, and the method he developed for animating curved surfaces became the industry standard. He first realised his brain was different when trying to perform Tibetan meditation with a colleague. Oregon deputies with &apos;guns drawn&apos; respond to report of intruder to find ... a Roomba vacuum.

Get breaking news alerts and special reports. The news and stories that matter, delivered weekday mornings. April 10, 2019, 3:56 PM GMT By Elisha Fieldstadt. Why the Moon makes us all romantics. Dubstep artist Skrillex could protect against mosquito bites. Image copyright Getty Images The sun is shining on your skin, there's a breeze in your hair and someone has just handed you a coconut with a straw sticking out of it.

This is living. But just as you start to relax you find yourself clawing at your own skin, scratching at the mosquito bites that have developed on your body over the past few days. But it doesn't have to be this way. According to a recent scientific study, the way to avoid mosquito bites is to listen to electronic music - specifically dubstep, specifically by US artist Skrillex. Sound is "crucial for reproduction, survival, and population maintenance of many animals," says a team of international scientists specialising in mosquitoes and the diseases they carry. They subjected adults of the species Aedes aegypti, known as the yellow fever mosquito, to electronic music to see whether it could work as a repellent.

And the results, which were published in the journal Acta Tropica, were good news for us and for Skrillex. Garfield phones beach mystery finally solved after 35 years. Giant sunfish washes up on beach in South Australia. Chickens 'gang up' to kill intruder fox on French farm. Hello Kitty is not a cat - she's a British school kid - BBC Newsbeat. Estonians rescue wild wolf from ice thinking it was a dog. Should the US hand over Minnesota's Northwest Angle to Canada? The man who ice skates to work - BBC Reel. Australian cane toads hitch a lift on python's back after storm. K-pop's EXP Edition: The world’s most controversial 'Korean' band.