Westpac selloff weighs on shares. Beware the unseen risks in Alibaba. G20 ministers move beyond GFC agenda. Explicit cookie consent. G20 to deliver on 90pc of growth target. G20 finance ministers and central bank governors have provided more than 900 proposals – 700 of them “new,” according to Mr Hockey - to produce a rise in growth of 1.8 per cent. 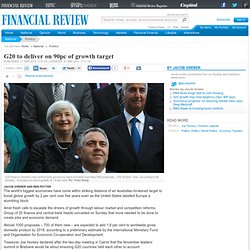 Pic: Peter Braig Jacob Greber and Ben Potter The world’s biggest economies have come within striking distance of an Australian-brokered target to boost global growth by 2 per cent over five years even as the United States labelled Europe a stumbling block. Amid fresh calls to escalate the drivers of growth through labour market and competition reforms, Group of 20 finance and central bank heads ­conceded on Sunday that more needed to be done to create jobs and economic demand. Almost 1000 proposals – 700 of them new – are expected to add 1.8 per cent to worldwide gross domestic product by 2018, according to a preliminary estimate by the International Monetary Fund and Organisation for Economic Co-operation and Development. Banks splash cash to win borrowers. Jared Lynch Banks have started to throw cash at customers again in an effort to win business as spring fever hits the property market and house prices soar. 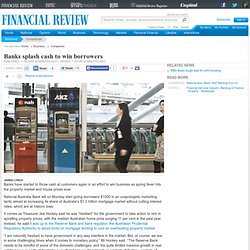 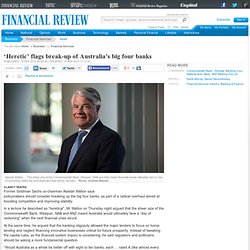 The sheer size of the Commonwealth Bank, Westpac, NAB and ANZ meant Australia would ultimately face a “day of reckoning” when the next financial crisis struck, he said. Photo: Andrew Meares. The inconvenient truth about our banks. Christopher Joye Big banks may need $41b more capital, UBS says The chairman of Joe Hockey’s financial system inquiry, David Murray, should avoid wasting any more time figuring out if our $400 billion major banks are more or less leveraged than peers overseas. 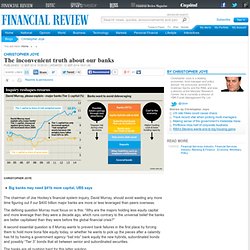 Alibaba valued at $186.5b after float. James Thomson Chinese internet giant Alibaba will debut with a market value of $US167.6 billion ($186.5 billion) on the New York Stock Exchange when it begins trading overnight on Friday. 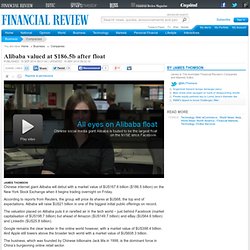 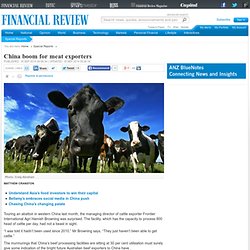 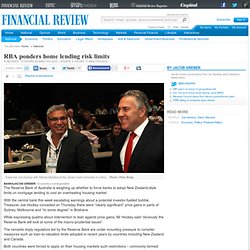 Photo: Peter Braig. Andrew Thorburn pushes broom through NAB. APRA Has Just Shaken The Foundations Of The Way Australian Banks Report Their Exposures. APRA chairman Wayne Byers has hit the ground running since taking over from the retired John Laker. 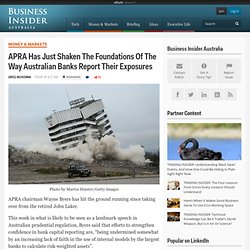 This week in what is likely to be seen as a landmark speech in Australian prudential regulation, Byers said that efforts to strengthen confidence in bank capital reporting are, “being undermined somewhat by an increasing lack of faith in the use of internal models by the largest banks to calculate risk-weighted assets”. That is a shot aimed directly at the big banks both in Australia and around the world. But he didn’t stop there: Capital ratios are the cornerstone of any analysis of bank financial health, for investors as much as regulators. While Basel III has done much to ensure the numerator of the capital ratio is a genuine measure of a bank’s capacity to absorb loss, doubts about the reliability of risk measurement in the denominator mean that the resulting ratios lack credibility as a reliable measure of financial strength. The boomers cannot save the world from a new stagnation trap. $A drops to six-month low on Fed statement. Bianca Hartge-Hazelman The trajectory of the Aussie against its US counterpart the past 30 days. 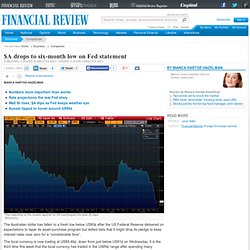 Bloomberg The Australian dollar has fallen to a fresh low below US90¢ after the US Federal Reserve delivered on expectations to taper its asset-purchase program but defied bets that it might drop its pledge to keep interest rates near zero for a “considerable time”. The local currency is now trading at US89.46¢, down from just below US91¢ on Wednesday. It is the third time this week that the local currency has traded in the US89¢ range after spending many months this year between US92¢ and US94¢. The dollar fell 1.3 per cent overnight on Thursday, immediately after Fed chair Janet Yellen said that data showed the US economy was improving in her policy statement at the conclusion of the Federal Open Market Committee (FOMC) meeting in Washington. “The labour market has yet to fully recover,” Dr Yellen told a press conference. China’s tech giants turn to agriculture. Jack Ma-linked Yunfeng Capital spent at least 2 billion yuan acquiring a 60 per cent stake in Chinese dairy giant Yili Industrial Group. 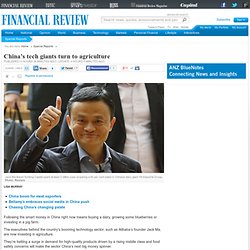 Photo: Reuters Lisa Murray Following the smart money in China right now means buying a dairy, growing some blueberries or investing in a pig farm. The executives behind the country’s booming technology sector, such as ­Alibaba’s founder Jack Ma, are now investing in agriculture. They’re betting a surge in demand for high-quality products driven by a rising middle class and food safety ­concerns will make the sector China’s next big money spinner. ANZ eyes sale of Oasis, PortfolioOne investment platforms.