Trends 2016: M-Commerce Finally Goes Mainstream. Today’s preview from GWI’s Trends 2016 report looks at why the m-commerce revolution hasn’t quite taken off in the way that many expected – something which is a bit puzzling when you consider that 8 in 10 internet users now personally own a smartphone. 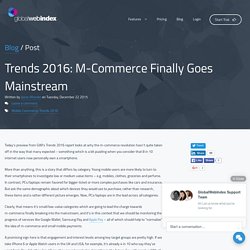 More than anything, this is a story that differs by category. Young mobile users are more likely to turn to their smartphones to investigate low or medium value items – e.g. mobiles, clothes, groceries and perfume. In contrast, PCs/laptops remain favored for bigger-ticket or more complex purchases like cars and insurance. But ask the same demographic about which devices they would use to purchase, rather than research, these items and a rather different picture emerges. Now, PCs/laptops are in the lead across all categories. A promising sign here is that engagement and interest levels among key target groups are pretty high. And Why Should Publishers Care? Google Adds Forecasting Data In AdWords Display Planner. 107 Mind-Blowing Sales Statistics That Will Help You Sell Smarter [SlideShare] When I discovered these two facts, I was shocked ... 44% of salespeople give up after one follow-up.80% of sales require five follow-ups. ... 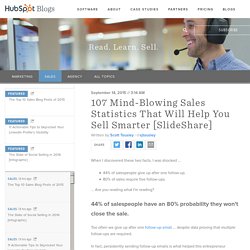 Are you reading what I'm reading? 44% of salespeople have an 80% probability they won't close the sale. Trends 2016: Ad-Blocking is Here to Stay. For this week’s first Chart of the Day, we preview our Trends 2016 report – which looks at ten of the biggest digital stories for the year ahead. 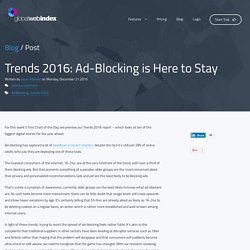 Ad-blocking has captured a lot of headlines in recent months, despite the fact it’s still just 28% of online adults who say they are deploying one of these tools. The heaviest consumers of the internet, 16-24s, are at the very forefront of the trend, with over a third of them blocking ads. But that presents something of a paradox: older groups are the most concerned about their privacy and personalized recommendations/ads and yet are the least likely to be blocking ads. That’s surely a symptom of awareness; currently, older groups are the least likely to know what ad-blockers are. An In-Depth Look At Image Optimization: Fact And Future. Marketer's Guide: Paid Media Campaign Management Platforms. Facebook Launches Events Discovery To Help iOS Users Find Nearby Events.

Scan Your Landing Pages With AdWords Scripts. Small bizmen use WhatsApp power to generate buzz - Times of India. Pune: As 40-year-old Nanasaheb Sheersat starts his day, he sets up his bhel puri stall outside an IT park and makes his first plates of bhel puri and paani puri, decorating them with sev and coriander sprigs. 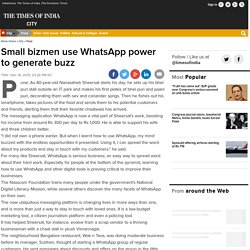 Then he fishes out his smartphone, takes pictures of the food and sends them to his potential customers and friends, alerting them that their favorite chaatwala has arrived. The messaging application WhatsApp is now a vital part of Sheersat's work, boosting his income from around Rs 300 per day to Rs 1,000. He is able to support his wife and three children better. "I did not own a phone earlier. But when I learnt how to use WhatsApp, my mind buzzed with the endless opportunities it presented. Asian Netflix Clone iFlix Is Raising $150M To Expand To Africa, Middle East And Europe. Netflix recently revealed that it has plans to launch in Singapore next year, but already a number of ambitious video streaming services have sprouted up in Southeast Asia — a region that is home to more than 500 million people — aiming to dethrone the U.S. company before it even arrives. 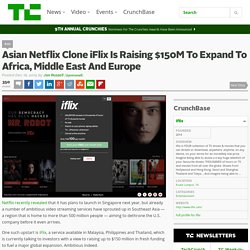 One such upstart is iFlix, a service available in Malaysia, Philippines and Thailand, which is currently talking to investors with a view to raising up to $150 million in fresh funding to fuel a major global expansion. Ambitious indeed. A pitch deck to investors dated November 2015, obtained by TechCrunch, states that iFlix — which is owned co-founded by Malaysia-based group Catcha Group and raised $30 million in April — is “looking to expand actively into other ASEAN markets as well as specific high-potential areas outside of ASEAN”. iFlix declined to comment when we contacted it about these plans.

Apple Pay will come to China in 2016 - Tech in Asia. Apple Pay will be available in mainland China in early 2016, according to a statement released by the company today. 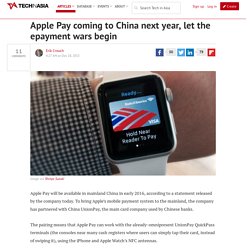 To bring Apple’s mobile payment system to the mainland, the company has partnered with China UnionPay, the main card company used by Chinese banks. The pairing means that Apple Pay can work with the already-omnipresent UnionPay QuickPass terminals (the consoles near many cash registers where users can simply tap their card, instead of swiping it), using the iPhone and Apple Watch’s NFC antennas. Apple says the service will be functional “as soon as early 2016 after relevant tests and certifications required by Chinese regulators.” Mobile Ad Innovation. The world of mobile ad tech is currently one of the fastest paced and innovated industries. 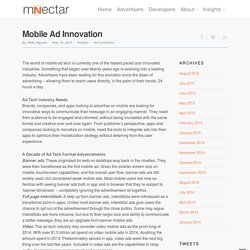 Something that began over twenty years ago is evolving into a leading industry. Advertisers have been waiting for this evolution since the dawn of advertising – allowing them to reach users directly, in the palm of their hands, 24 hours a day. 9 Of The Best Performing Tech Stocks In 2015. Telegram Gets 1.5M+ Download Spike As Brazil WhatsApp Shutdown Kicks In. Messaging app Telegram is currently experiencing a bump in downloads in Brazil thanks to a local court ruling forcing a 48 hour shutdown of WhatsApp, which started at 9pm ET on Wednesday. 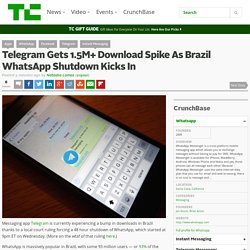 (More on the wtaf of that ruling here.) Apple Continues To Showcase Its Own Apps In The App Store’s Top Charts. It seems Apple is continuing to use the App Store’s “Top Charts” section to promote its own applications, by allowing apps like iMovie and those from its iWork suite to appear in the Top 10 Free apps on users’ iPhones. 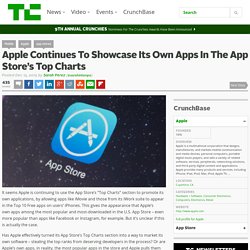 This gives the appearance that Apple’s own apps among the most popular and most-downloaded in the U.S. App Store – even more popular than apps like Facebook or Instagram, for example. But it’s unclear if this is actually the case. Has Apple effectively turned its App Store’s Top Charts section into a way to market its own software – stealing the top ranks from deserving developers in the process? Or are Apple’s own apps, in reality, the most popular apps in the store and Apple pulls them out of the Top Charts as a means of suppressing this information, in order to give the spots to third-party developers?

This is not a new problem, unfortunately. Chart: The Biggest Trends in Digital Media in 2015. As the year draws to a close, it’s time to recap on what has been a busy year in the digital media landscape. 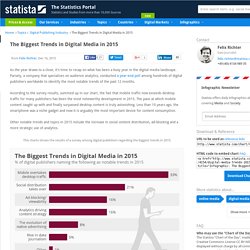 Parsely, a company that specializes on audience analytics, conducted a year-end poll among hundreds of digital publishers worldwide to identify the most notable trends of the past 12 months. According to the survey results, summed up in our chart, the fact that mobile traffic now exceeds desktop traffic for many publishers has been the most noteworthy development in 2015. The pace at which mobile content caught up with and finally surpassed desktop content is truly astonishing.

Less than 10 years ago, the smartphone was a niche gadget and now it is arguably the most important device for content consumption. Glispa Unveils Its Audience Platform To Transform Big Data Into Actionable Insights For Publisher and Advertising Clients. BERLIN and SAN FRANCISCO, Dec. 15, 2015 /PRNewswire/ -- glispa, the high performance mobile marketing pioneer today unveils its advertising technology (adtech) audience platform.

Commerce of Things 2015 - Developer Economics. For the purpose of this report, VisionMobile has done market research around e-commerce, m-commerce and the Internet of Things, as well as analysed data from Developer Economics 9th edition, which reached an impressive 13,000+ developers. We have also scanned the market for the most relevant use cases, talked to key players active in the field of e-commerce and the Internet of Things, as well as analyzed secondary macro-economic data on the researched markets. Developer Economics 9th edition, with 13,000+ respondents from 149 countries around the world, is the most global research on mobile, desktop, IoT and cloud developers combined ever conducted. This large-scale online developer survey was designed, produced and carried out by VisionMobile over a period of five weeks between May and June 2015.

Companies of ASO (VB) The ABCs Of Programmatic. Exclusive: InMobi faces headwinds as ‘strategic’ client Supercell cuts spending. InMobi Technologies Pvt Ltd seems to be heading for a challenging period as a top client has reduced spending on its mobile advertising platform. InMobi CEO Naveen Tewari said at a recent townhall interaction that Finnish games developer Supercell has cut its mobile advertising spend with InMobi, a person familiar with the development told Techcircle.in.

The person said that Supercell, InMobi’s top gaming client, may eventually stop working with the Indian mobile advertising firm. However, InMobi said that Supercell remains a strategic client. 2016 app trends in Asia, as predicted by App Annie - Tech in Asia. App Annie’s Danielle Levitas. App Annie is one of the tech industry’s most important sources for tracking app trends and performance across the globe. For the first time, the firm is leveraging its extensive data to make predictions for the global app landscape in 2016.

Don't forget to read this... What makes a great mobile marketer? On the Gaming Insiders Growth mailing list, someone recently asked: “What makes a great mobile user acquisition marketer?” The passion and expertise of that discussion burst forth like a thunderbolt. Mobile marketers eat and breathe acquisition. Trends 2016: Connecting India. Continuing our preview of GWI’s Trends 2016 report, this year’s final Chart of the Day looks at the growing importance of India. The country’s 1.25 billion strong population is relatively young, increasingly brand-hungry and, most importantly, largely unconnected to the internet. Of the 34 countries tracked by GWI, it has one of the very lowest internet penetration rates, with the figure still stuck below the 20% mark.

Behind Agency Lines: How Advanced TV Is Reshaping Media Buying Structures. The emergence of data-enabled TV targeting is altering the agency buying structure. Amex: ‘Programmatic TV Is Still A Very Manual Process’ Chart: The Platform War Is Over and Android Won. While more smartphone vendors than ever compete for the affection (and the money) of potential smartphone buyers around the world, the long-raging platform war appears to be over. According to a new forecast from the International Data Corporation, the positions of Android and iOS on top of the smartphone food chain are all but cemented as other platforms fail to make a breakthrough.

With more than 80 percent market share, Android-based devices are expected to dominate worldwide smartphone shipments until 2019 and beyond. A New Currency To Measure Audience Quality: qaCPM. Lyft, Didi, Ola And GrabTaxi Partner In Global Tech, Service Alliance To Rival Uber. You Will Soon See Interactive Mobile Ads Streaming Apps And Games So You Can Try Before You Buy.

Apple Appears To Be Promoting Its Own Apps In The iPhone App Store’s Top Charts. The 2015 U.S. Mobile App Report by ComScore. AOL-Owned Millennial To Offer TV Ad Retargeting In Mobile. Will mobile games in India be different from China? The Europe Report: Early Adopters Continue to Evolve. Marketers Say They Will Reallocate Ad Spend Due To Lack Of Third-Party Measurement, Says The ANA. Digital landscape of Southeast Asia in Q4 2015. Google aims for China launch of Google Play app store next year: sources. MoPub Adds Native Video Mediation, But Full Twitter Integration Still To Come. A third of 16-24s find new brands via online ads. Behind the veil: a glance at Iran’s leading app store. Google Play will start labeling Android apps with ads in early 2016.