Global Consumer Pulse Research 2013 – Accenture Sales and Customer Services (CRM) Know me: Hyper-relevance Consumers are in control – they reward relevance but punish irrelevance by clicking away, disengaging and broadcasting their dissatisfaction through social media or word of mouth. 21% of consumers across all industries agreed their providers offer them a tailored experience while 26% disagreed. 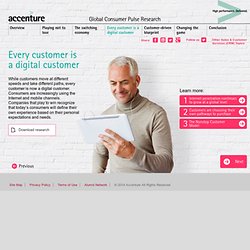 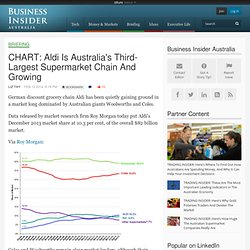 Data released by market research firm Roy Morgan today put Aldi’s December 2013 market share at 10.3 per cent, of the overall $82 billion market. Via Roy Morgan: Coles and Woolworths remain clear market leaders, although their market share dropped 3.4 per cent to 33.5 per cent and 1.2 per cent to 39 per cent respectively in the past eight years. Roy Morgan reports that a total of 9.5 million customers shop at market leader Woolworths in an average four-week period, compared to 8.8 million customers at Coles and 4.2 million at Aldi. Roy Morgan group account manager of consumer products Warren Reid said Aldi’s growth showed that the Australian supermarket industry was “not a two-horse race”. Tesco’s fall from grace a lesson for Coles and Woolworths. 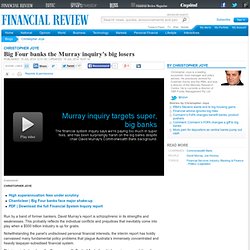 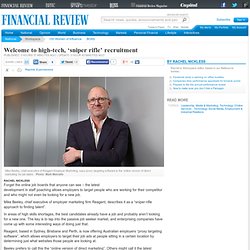 Photo: Mark Metcalfe Rachel Nickless Forget the online job boards that anyone can see – the latest development in staff poaching allows employers to ­target people who are working for their competitor and who might not even be looking for a new job. Mike Beeley, chief executive of employer marketing firm Reagent, describes it as a “sniper-rifle approach to finding talent”. RBA says renters better off if housing cools. House price highs may see change in attitudes to renting. What central banks should do to deal with financial bubbles. Big Four banks face major shake-up. If some of the findings of the inquiry led by former CBA CEO David Murray go forward, the big four banks would have to lift their capital ratios and they’d face increased competition from smaller financial institutions such as regional banks and credit unions. 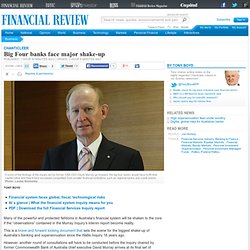 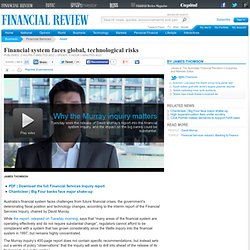 While the report, released on Tuesday morning, says that “many areas of the financial system are operating effectively and do not require substantial change”, regulators cannot afford to be complacent with a system that has grown considerably since the Wallis inquiry into the financial system in 1997, but remains highly concentrated.

The Murray inquiry’s 400-page report does not contain specific recommendations, but instead sets out a series of policy “observations” that the inquiry will seek to drill into ahead of the release of its final report, due in November. Superannuation Financial advice. Coles steps up bank competition. The rise of the digital bank. Across Europe, retail banks have digitized only 20 to 40 percent of their processes; 90 percent of European banks invest less than 0.5 percent of their total spending on digital. 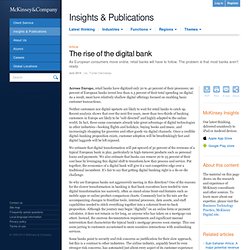 As a result, most have relatively shallow digital offerings focused on enabling basic customer transactions. Neither customers nor digital upstarts are likely to wait for retail banks to catch up. Recent analysis shows that over the next five years, more than two-thirds of banking customers in Europe are likely to be “self-directed” and highly adapted to the online world. In fact, these same consumers already take great advantage of digital technologies in other industries—booking flights and holidays, buying books and music, and increasingly shopping for groceries and other goods via digital channels. Once a credible digital-banking proposition exists, customer adoption will be breathtakingly fast and digital laggards will be left exposed. Australian jobless rate set to rise above the US. Payrolls rose 15,900 from May, when they fell by a revised 5,100, the Australian Bureau of Statistics said on Thursday. 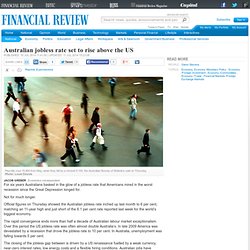 Photo: Louie Douvis Jacob Greber Economics correspondent For six years Australians basked in the glow of a jobless rate that Americans mired in the worst recession since the Great Depression longed for. Not for much longer. Official figures on Thursday showed the Australian jobless rate inched up last month to 6 per cent, matching an 11-year high and just short of the 6.1 per cent rate reported last week for the world’s biggest economy. The rapid convergence ends more than half a decade of Australian labour market exceptionalism. The closing of the jobless gap between is driven by a US renaissance fuelled by a weak currency, near-zero interest rates, low energy costs and a flexible hiring conditions.

The US Labour Department last week reported 288,000 net new jobs were created in June, the fifth month in a row with more than 200,000 extra jobs. Unis need to get with program. The Uberization of Everything, and beyond…