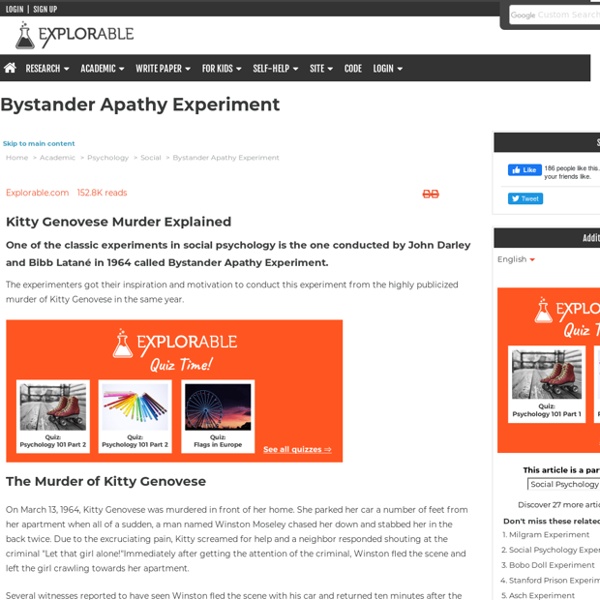 Online Bullying and the Bystander Effect Melania Trump will become First Lady of the United State in January. She recently said that as First Lady she will dedicate herself to fighting online bullying. “Technology has changed our universe,” she said. “Our culture has gotten too mean and too rough especially to children and to teenagers… We have to find a better way to talk to each other, to disagree with each other, to respect each other.” The irony was not lost on many. 10 Notorious Cases of the Bystander Effect The bystander effect is the somewhat controversial name given to a social psychological phenomenon in cases where individuals do not offer help in an emergency situation when other people are present. The probability of help has in the past been thought to be inversely proportional to the number of bystanders. In other words, the greater the number of bystanders, the less likely it is that any one of them will help. This list describes the prototype of the effect and cites nine particularly heinous examples. The Parable of The Good Samaritan

Bystander Effect Explanations > Theories > Bystander Effect Description | Research | Example | So What? | See also | References Description When there is an emergency, the more bystanders there are, the less likely it is that any of them will actually help. Pluralistic ignorance is where they assume nothing is wrong because nobody else looks concerned. How Diffusion of Responsibility Affects Group Behavior Diffusion of responsibility is a psychological phenomenon in which people are less likely to take action when in the presence of a large group of people.1 For example, imagine that you are in a large city on a bustling street. You notice a man fall to the ground and start convulsing as if having a seizure. Many people turn and look at the man, but no one moves to help or call for medical assistance.

The Shocking Murder of Ilan Halimi In 2006 a young Parisian Jew was kidnapped and brutally murdered because he was Jewish. French authorities initially refused to believe it was a hate crime. This article originally appeared in Ami Magazine. Little did Ilan Halimi know that day that the customer walking into the cellphone store where he worked as a salesman would be the agent of his death.

How to be kinder to strangers in Singapore, Opinion News The Charities Aid Foundation recently released the World Giving Index 2017, which provides insight into the scope and nature of giving around the world. Based on data collected from the Gallup World Poll, the index, which polled 1,000 individuals in each representative country, revealed two surprising facts. Myanmar, Indonesia and Kenya turned out to be among the most charitable countries, even though they have a huge number of their populations living below the poverty line. The Bystander Effect and Altruism Learning Objectives Explain the factors that influence human altruism, including reciprocal altruism and diffusion of responsibility. Go to YouTube and search for episodes of “Primetime: What Would You Do?” You will find video segments in which apparently innocent individuals are victimized, while onlookers typically fail to intervene. The events are all staged, but they are very real to the bystanders on the scene. The entertainment offered is the nature of the bystanders’ responses, and viewers are outraged when bystanders fail to intervene.

The guide to being a better bystander But the desire to help people from marginalized groups who face harassment or threat isn't enough. We have to act. Just recently, on a New York subway, a young Muslim woman was reportedly subjected to verbal and physical harassment by three men; according to police, the woman said these men grabbed at her and called her a "terrorist" who should "get out of this country." Later, on Facebook, she lamented that "so many individuals chose to be bystanders," rather than intervening or trying to help her. It's not a matter of heroics.

Yue Yue dead: Chinese girl Wang Yue, 2, run over as bystanders watch, dies Yue Yue, the girl who shamed China, is dead: Two-year-old run over TWICE as dozens of people ignored her lying in the road succumbs to her injuries Announcement of her death quickly became the most talked about topic on China's version of TwitterLawmakers set to meet to discuss introduction of 'Good Samaritan' legislationCountry's economic boom and disparity between rich and poor have made changing social values a contentious topic By Richard Hartley-parkinson Updated: 09:25 EDT, 5 November 2011

What Is the 'Bystander Effect' and How Do People Overcome It? This story appeared in the June 2020 issue as "Action!" Subscribe to Discover magazine for more stories like this. On April 9, 2017, three security officers from the Chicago Department of Aviation forcibly removed David Dao from an overbooked United Airlines flight. Dao, a 69-year-old doctor, was dragged down the plane’s aisle after he refused to give up his seat. In the process, his head hit an armrest and he was knocked unconscious. The bystander effect is being made worse by people filming violent events on their smartphones On April 9, 2017, a video of a man being dragged off a United Airlines flight was posted on the internet and went viral. But I don’t need to tell you that. Each of your most outspoken Facebook friends probably posted about the event, highlighting the aspects of it that best reinforced their worldview.

The Bystander Apathy Experiment - The Case of Kitty Genovese In 1964, Kitty Genovese was murdered infront of her own home. When she was stabbed by an assailant, she screamed for help but her neighbours only shouted at the assailant to leave kitty alone. Her neighbours also saw the assailant fledding the scene and then returning again to fatally stab kitty. Her neighbours finally called the police and ambulance but it was already too late. All her neighbours were aware of the murder but did not take any actions during the time. This led Darley and Latané to experiment through a similar event but with a blind prerecorded voice discussions with university students and seeing if they will take actions when one of them in discussion suddenly have a seizure. The experiment sees diffusion of responsibility and pluralistic ignorance, much like in the kitty genovese murder case. by vrncchin Sep 20