The 100 Best Young-Adult Books of All Time 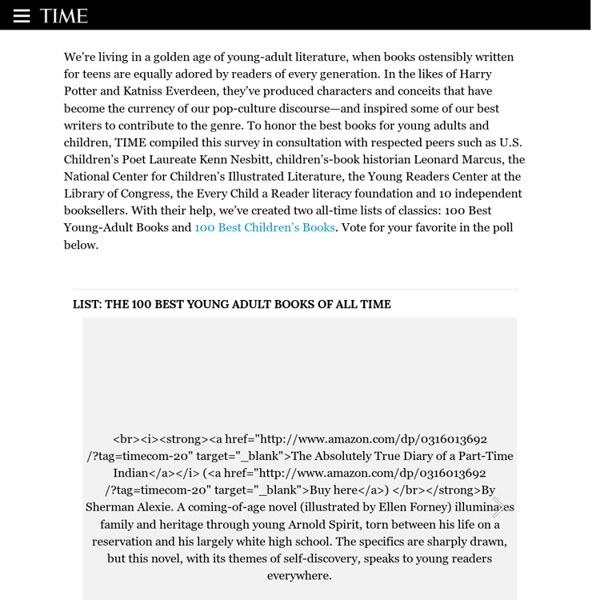 Don't Judge a Book by its Cover: Tech-Savvy Teens Remain Fans of Print Books With today's rapidly evolving technology and ever-present social media changing the way consumers are connecting with the written word, it should come as no surprise that today's teens are finding and consuming content differently from previous generations. But while we typically associate these youthful consumers with being early adopters of new technology and digital content platforms, the reading habits of those aged 13-17 are a mix of old and new. Despite teens' tech-savvy reputation, this group continues to lag behind adults when it comes to reading e-books, even with the young adult genre's digital growth relative to the total e-book market.

The Most Read Book Among High School Seniors From Each State, in One Surprising Map Native Americans living in the Northeast, like Game of Thrones fans, knew one thing at this time of year: Winter is coming. As such, now was the time for one last glut of food before a four-month-at-least period of traveling along with migrating prey in order to hunt for fresh food. In that sense, yes, Native American harvest feasts are a clear primogenitor to today's Thanksgiving. But the truth is more complex. As Thanksgiving matured as a holiday in the Americas, many of the inhabitants in the United States — Native Americans, settlers and enslaved Africans — contributed elements of our modern Thanksgiving meal to the table. 17 of the Most Exciting YA Books to Read in 2017 Introducing a piece on some of the best young adult books coming out in 2017 is a delightful challenge: There’s no overarching trend, no genre eclipsing all other genres, no theme so prevalent as to even call it a theme — and that’s a good thing. There is truly something for everyone this year, whether that reader enjoys things quirky and magical, extra-real real, wild, or world-building. The books, they keep on coming, and these 17 are just the beginning of what promises to make 2017 an exciting year for YA lovers. Carve the Markby Veronica RothDivergent author Veronica Roth is back with a new series, this time set in another galaxy, instead of a dystopic Chicago. Roth’s talent for world-building is on display as ever; in Carve the Mark, every being develops a “currentgift,” a unique power to help them shape the future. But some gifts, like those belonging to Akos and Cyra, make their owners vulnerable to others’ control.

20 Quotes From Children’s Books Every Adult Should Know Posted on July 7, 2014 It’s interesting how some of life’s greatest lessons can be found in children’s literature. And chances are that we did not realize this back when we were kids. Sometimes it’s only when we’re older that we learn to fully appreciate and understand the poignant words from our childhood entertainment. Study Finds Reading to Children of All Ages Grooms Them to Read More on Their Own Photo Cue the hand-wringing about digital distraction: Fewer children are reading books frequently for fun, according to a new report released Thursday by Scholastic, the children’s book publisher. In a 2014 survey of just over 1,000 children ages 6 to 17, only 31 percent said they read a book for fun almost daily, down from 37 percent four years ago. There were some consistent patterns among the heavier readers: For the younger children — ages 6 to 11 — being read aloud to regularly and having restricted online time were correlated with frequent reading; for the older children — ages 12 to 17 — one of the largest predictors was whether they had time to read on their own during the school day. The finding about reading aloud to children long after toddlerhood may come as a surprise to some parents who read books to children at bedtime when they were very young but then tapered off.

Digital Library Trends for 2015 Libraries in all over the world are undergoing a digital renaissance as major publishers have firmly committed themselves to the concept of making e-Books available. Today, we look at some of the biggest trends facing libraries in Canada, US and United Kingdom. A recent report by the Library Journal has stated that 95% of all US libraries have an e-book collection. That’s up from 89% in both 2013 and 2012, when researchers thought that adoption had plateaued for good.

Modern Film Adaptations Of Jane Austen, Ranked Dec. 16 is Jane Austen’s 239th birthday, and in the past two centuries, her seminal novels have been read and reread passionately by generations. More than that, however, they’ve captured the imagination of the culture in a way few other authors’ works have. Like Shakespeare, Austen has had her work adapted into major motion pictures, sequels, TV series and so much more. Most notably, Austen’s novels are so recognizable and relatable that they’ve been repeatedly adapted as modern reimaginings -- not all of them successful.