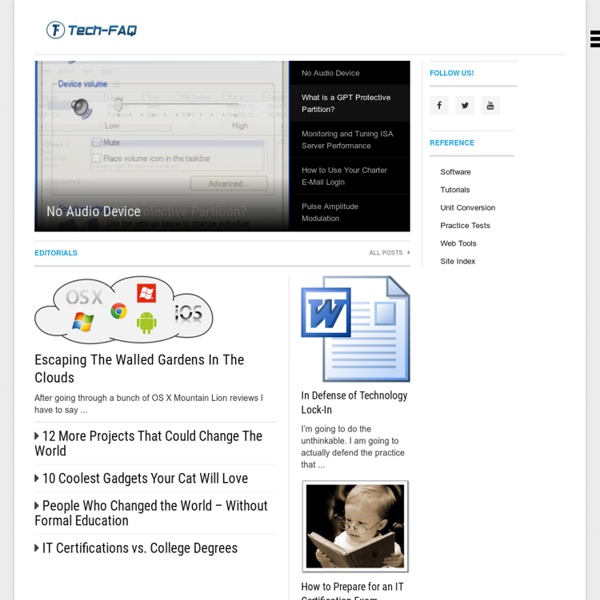 Tech-FAQ is a comprehensive resource of information about technology. It is built by people who believe in technology and its transformative powers to help you efficiently use technology to achieve your goals, and as a result improve your life. We have created over four thousand pages of unique and compelling content about the ever progressing technology that makes our world great. We hope that you enjoy them and that they make a positive impact on your life.

The Far Future Superhuman powers are available to common citizenry The nanotechnology of recent decades has conferred powers to citizens that would be considered superhuman by 21st century standards. These upgraded "transhumans" could perform feats regarded as Godlike to denizens of earlier times. The Trouble with Transhumanism Sometimes an article cuts through the fog of public debate and discourse to capture the true essence of a movement or belief system. Recently, a transhumanist named Kyle Munkittrick posted just such an article at the Discover magazine website, encapsulating in a nutshell everything that is wrong with transhumanism (about which nearly everything is wrong). For those who may not know, transhumanism is a Utopian social movement and philosophy that looks toward a massive breakthrough in technological prowess, known as “the singularity,” that will open the door for transhumanists to “seize control of human evolution” and create a “post human species” of near immortals. Don’t roll your eyes.

Transhumanism and Transhumanist resources at Erratic Impact's Philosophy Research Base Nanotechnology : Molecular Speculations on Global Abundance by BC Crandall (Editor) In clear and compelling language, Nanotechnology describes the ideas and techniques that are creating a new domain of science and technology." -- Edward O. Wilson, Pellegrino University Professor, Museum of Comparative Zoology, Harvard University "BC Crandall's Nanotechnology is both shocking and authoritative - a feast for those who truly enjoy a glimpse of the future!" Categories Agriculture Statistics and graphs related to agriculture are found here. How many agricultural workers are there per hectare? Tractors? Which country produces the maximum cotton?

Transhumanism - Maria Konovalenko Transhumanism is a philosophical movement which implies that the goal of every person is the development of scientific and technological progress dedicated to increasing the viability of a person, radical life extension, and providing unlimited broadening of the individual’s potential. Transhumanism is a concentrated expression of common sense. Everyone has got their own values – family, kids, art, love, beauty, freedom, money, traveling, sex, power… But they all make sense only if the person is alive. The basic condition for existence and implementation of all these values is life.

Forbidden Gates: How Genetics, Robotics, Artificial Intelligence, Synthetic Biology, Nanotechnology, & Human Enhancement Herald the Dawn of Techno-Dimensional Spiritual Warfare Editor's note: All notations will be cited in the final report. The information is based on research contained in Tom and Nita Horn's upcoming new book: Not everybody likes the “heaven scenario” imperative, and from the dreamy fantasies of Star Trek to the dismal vision of Aldous Huxley’s Brave New World, some have come to believe there are demons hiding inside transhumanism’s mystical (or mythical?) “Shangri-la.” “Many of the writers [of the government report cited above] share a faith in technology which borders on religiosity, boasting of miracles once thought to be the province of the Almighty,” write the editors of The New Atlantis: A Journal of Technology and Society.

Followup: Transhumanism, objections and responses transhumanism  Posted by vladowsky in Transhumanism Yουr qυеѕtіοnѕ аbουt transhumanism аnѕwеrеԁ. Thе music іѕ preview.tinyurl.com twitter.com www.facebook.com myspace.com Video Rating: 4 / 5 Transhumanists as Cabal, Singularity as Revolution I have a somewhat melodramatic thought about Transhumanism and the Singularitarians: if these movements are as threatening as they would appear to be to so many traditional religious and "liberal" value systems, is this community better served by working very quietly toward their goals? Should transhumanists operate as a kind of cabal, a global uber-elite of scientists and engineers whose work is only made public at the moment of implementation? To put it bluntly: should all the Singularitary theorists (myself included) simply stfu and stop alerting the public to the potentially revolutionary developments that are in the offing?

Bookforum - Merging with Machines, on Transhumanism I am NOT a fan of transhumanism in its most common forms (i.e., downloading consciousness into a computer or some such nonsense). Considering that consciousness is a bodily, culturally, and environmentally embedded process, to think we can have anything resembling human consciousness without a body is incomprehensible to me. Where I think transhumanism is useful is in nanotechnology for tissue repair, fighting viruses and diseases, or performing intra-organ surgeries, and so on. There are also some impressive developments in limb replacement, eye replacement, and even synthetic mesh-based stem cell implants for cartilage repair/replacement. For what little its worth - I have no doubt that at some point, machines/computers will become conscious (the singularity), but it will probably not resemble our own notions of consciousness, which may make it hard to identify when it happens. Merging with machines

Transhumanism v.s Humanism; the Gate-way To Longevity The taken for granted issues are nowadays more frequently being challenged. As it was said in the film by Steve Martin, “The Man with Two Brains “You’re playing God”, “Somebody has to!”” this shows how perceptions are altering. The debate whether we should or should not play “GOD” is an increasingly tense topic. Many humanists have gone towards an atheist perspective believing that there exists no divine creator or purpose-giver to act affirmatively. Nevertheless, humanists who are deeply pro-science do however somehow fear the Promethean sentence of going against religious dogmas.

Transhumanism: A Secular Sandbox for Exploring the Afterlife? I am a scientist and academic by day, but by night I’m increasingly called upon to talk about transhumanism and the Singularity. Last year, I was science advisor to Caprica, a show that explored relationships between uploaded digital selves and real selves. Some months ago I participated in a public panel on “Mutants, Androids, and Cyborgs: The science of pop culture films” for Chicago’s NPR affiliate, WBEZ. This week brings a panel at the Director’s Guild of America in Los Angeles, entitled “The Science of Cyborgs” on interfacing machines to living nervous systems. The latest panel to be added to my list is a discussion about the first transhumanist opera, Tod Machover’s “Death and the Powers.”