How Our Brains Make Memories 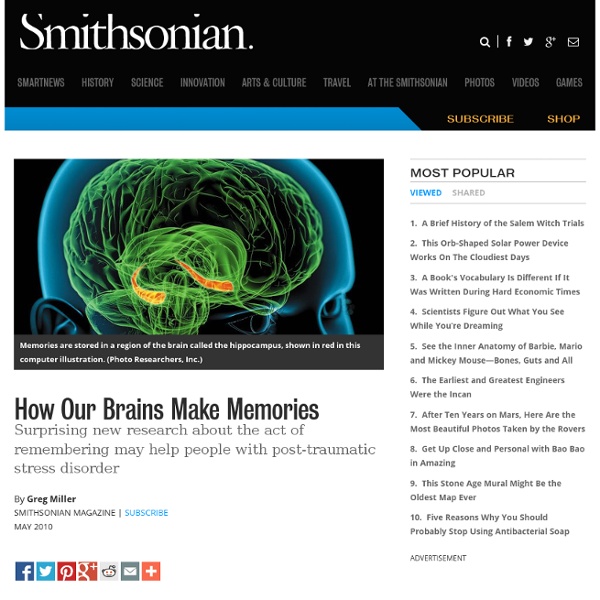 Sitting at a sidewalk café in Montreal on a sunny morning, Karim Nader recalls the day eight years earlier when two planes slammed into the twin towers of the World Trade Center. He lights a cigarette and waves his hands in the air to sketch the scene. At the time of the attack, Nader was a postdoctoral researcher at New York University. He flipped the radio on while getting ready to go to work and heard the banter of the morning disc jockeys turn panicky as they related the events unfolding in Lower Manhattan. Nader ran to the roof of his apartment building, where he had a view of the towers less than two miles away. In the following days, Nader recalls, he passed through subway stations where walls were covered with notes and photographs left by people searching desperately for missing loved ones. Like millions of people, Nader has vivid and emotional memories of the September 11, 2001, attacks and their aftermath. Nader believes he may have an explanation for such quirks of memory. Related:  Memor.ability

Magnetic manipulation of the sense of morality : Neurophilosophy WHEN making moral judgements, we rely on our ability to make inferences about the beliefs and intentions of others. With this so-called “theory of mind”, we can meaningfully interpret their behaviour, and decide whether it is right or wrong. The legal system also places great emphasis on one’s intentions: a “guilty act” only produces criminal liability when it is proven to have been performed in combination with a “guilty mind”, and this, too, depends on the ability to make reasoned moral judgements. MIT researchers now show that this moral compass can be very easily skewed. Liane Lee Young of MIT’s Department of Brain and Cognitive Science and her colleagues asked participants to make moral judgements about different variations of a number of scenarios. These scenarios differ in the beliefs underlying Grace’s actions and in their outcome. Whether or not these findings extend to real world judgements remains to be seen. Young, L., et al. (2010). Saxe, R. & Kanwisher, N. (2003).

"Teleported" mice reveal secrets of memory OK, I skimmed the Nature article, and it doesn't appear to say this at all. Either this post references the wrong article, or the author didn't read paper, and is telling us what is going on second-hand, trying to analyze things and draw conclusions along the way. Can somebody who knows about memory and rat brains and such double-check if my interpretation of the article is correct? First of all, the article talks about rats, not mice. Second, the article (at least from what I can understand) says nothing about memory quanta. Third, what the article actually says (or appears to say) is that the mental maps in the rats' brains flickered between one state or the other. Fourth, that does not imply memory quantization, but says that a spacial map in the rat's brain is somehow a whole structure, stored and switched to very quickly. So basically it appears that the recognition type of memory is based on complete structures that somehow describe or represent the entire object being recognized.

How Memory Works: an Infographic For our blog’s sections on ‘Your Brain‘ and ‘Test Prep‘, we’re always on the lookout for great articles, videos and charts on memory and retention. By helping you understand how our brains work, we want to allow you to try different approaches to studying that will hopefully help you become better learners for life. Over time, we’ve compiled articles on brain foods, how motivation and memory works, methods for better retention, … If we take a look at the sum of all articles and areas of interest, it seems obvious that there should be one chart that combines all of these elements that make up and influence our memory. Thanks to onlinecolleges.com, there now is. Dr.

Your Memory Isn't What You Think It Is Who hasn’t experienced something like this with old friends? ‘That was a great day in the park.’ ‘No, it was the beach.’ ‘It rained.’ ‘We wore overcoats.’ It is our friend’s memory that is faulty, not ours we say. Now Daniela Schiller, of Mt. Not only are our memories faulty (anyone who has uncovered old diaries knows that), but more importantly Schiller says our memories change each time they are recalled. Schiller says that memories are malleable constructs that are reconstructed with each recall. What we remember changes each time we recall the event. One implication of Schiller’s work is that memory isn’t like a file in our brain but more like a story that is edited every time we tell it. Schiller says, “My conclusion is that memory is what you are now. In his MIT Technology Review article about this work, Stephen S.

Exceptional Memory Explained: How Some People Remember What They Had for Lunch 20 Years Ago Researchers from the University of California, Irvine reported in 2006 on a woman named Jill Price who could remember in great detail what she did on a particular day decades earlier. James McGaugh, Larry Cahill and Elizabeth Parker put the woman through a battery of tests and ascertained that she was not using any of the memory tricks that have been known to mnemonists for millennia. Word got out, the media descended and the lab now receives calls every day from people who say they have the same ability as Price. A question that has persisted about this line of research is whether the brains of these people are distinct from the organs of others who can’t remember yesterday’s lunch, let alone trivial events from 20 years back. “There seems to be this extreme organizational capacity, kind of like the tricks that mnemonists use,” says Howard Eichenbaum, a Boston University professor who is editor of the journal Hippocampus. Source: University of California, Irvine

Researchers show that memories reside in specific brain cells Our fond or fearful memories — that first kiss or a bump in the night — leave memory traces that we may conjure up in the remembrance of things past, complete with time, place and all the sensations of the experience. Neuroscientists call these traces memory engrams. But are engrams conceptual, or are they a physical network of neurons in the brain? In a new MIT study, researchers used optogenetics to show that memories really do reside in very specific brain cells, and that simply activating a tiny fraction of brain cells can recall an entire memory — explaining, for example, how Marcel Proust could recapitulate his childhood from the aroma of a once-beloved madeleine cookie. In that famous surgery, Penfield treated epilepsy patients by scooping out parts of the brain where seizures originated. Fast forward to the introduction, seven years ago, of optogenetics, which can stimulate neurons that are genetically modified to express light-activated proteins. False memory

Memories Can Be Distorted Over Time September 20, 2012 Connie K. Ho for redOrbit.com — Your Universe Online Researchers from the Feinberg School of Medicine at Northwestern University recently discovered that a memory of an event can change with each retelling. The team of scientists found that the modification of the memory of an event is due to an adjustment in brain networks that changes the placement of the memory. As a result, when an individual remembers a particular situation, it may not be exactly the same as remembered before. “A memory is not simply an image produced by time traveling back to the original event — it can be an image that is somewhat distorted because of the prior times you remembered it,” explained lead author Donna Bridge, a postdoctoral fellow at Northwestern University Feinberg School of Medicine, in a prepared statement. The results of the study may pinpoint some of the issues that witnesses may have when giving a testimony for a trial. Source: Connie K.

Improve Your Memory by Speaking Your Mind’s Language By learning the language your mind uses, you’ll be able to tap into your mind’s full potential and develop a remarkable memory. It’s easier than you think – and you’ll actually have fun doing it. Your Mind Thinks in Pictures Along its evolution, the brain has become amazingly effective in dealing with sensory data. It is by correctly interpreting the five senses that the mind understands the environment and takes decisions. Among the human senses, sight has become the most sophisticated and developed of all. Imagery is the real language of the mind. If I ask you to think about a horse, what comes to your mind? Visual Thinking and Memory To fully illustrate the astonishing effect that images have on your memory, let’s walk through a basic memorization technique called memory pegging. Before getting to the technique, let me give you a simple challenge: memorize a groceries list of ten items. baconeggswinebatteriesbubble gummilkenvelopesspinachcoffeetomato Learning Your Mind’s Basic Vocabulary

Scans reveal how we change memories › News in Science (ABC Science) News in Science Friday, 1 July 2011 Clare PainABC Changing memories Reminiscing about old times with your friends is fun, but it may rewrite history according to a new study. Research reported in this week's edition of the journal Science suggests that comparing memories with other people sometimes alters the stored memory in the brain. Micah Edelson, a PhD student, and Professor Yadin Dudai at the Weizmann Institute of Science in Israel carried out the work with scientists from University College London in the United Kingdom. It has been known for some time that, when people reminisce in a group, an error in memory held by one group member may be transferred to others in the group. Sometimes, people genuinely believe the new erroneous version of events, a process known as 'rewriting'. "Humans are very social animals," says Edelson. Edelson divided 30 volunteers into small groups to watch a TV documentary. Changes in the brain Not always a bad thing