MindSet: A Book written by Carol Dweck. Teaching a growth mindset creates motivation and productivity in the worlds of business, education, and sports. 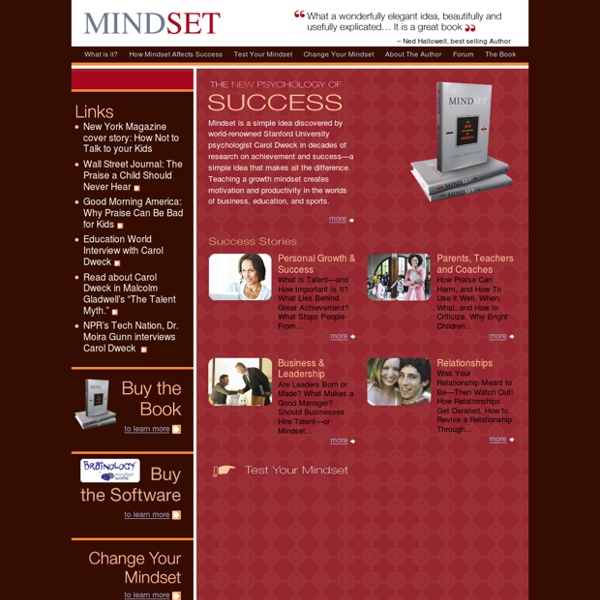 Common Sense Media close(x) Don’t Miss Out You’re all set! Look out for our weekly updates soon. Connect with us Jump to navigation conceptual understanding rubric – What Ed Said What do you notice about Audri as a learner? We begin our Year 4 collaborative planning session with Audri… to generate thinking about the ways young learners own their learning, outside the classroom… The teachers notice and name his confidence, persistence, belief in himself, resourcefulness, curiosity, commitment, ownership of learning, enthusiasm, excitement... Howard Gardner, multiple intelligences and education Howard Gardner, multiple intelligences and education. Howard Gardner’s work around multiple intelligences has had a profound impact on thinking and practice in education – especially in the United States. Here we explore the theory of multiple intelligences; why it has found a ready audience amongst educationalists; and some of the issues around its conceptualization and realization.

Growth Mindsets: Creating Motivation and Productivity The key to success and achieving our goals is not necessarily persistence, hard work and focus. These behaviours are the by-product of something else. What is actually critical to our success is our mindset. Mindsets are beliefs about ourselves and our most basic qualities, such as intelligence, talents and personality. We all have innate talents and skills, things that we are naturally good at or that set us apart from other people.

10 Great Web Tools to Create e-Books for your Classroom I have just finished compiling a list of some must have web-based tools that can allow you to create books.These tools can also be used with students. They are very simple to use and have friendly interfaces. The best way to get students engaged is to make them feel they are responsible for their learning, you can for instance have them paired in small groups and work on a writing project using one of the tools below. Check out the list below and let us know what you think of these book making tools : 1- Blurb This is probably one of the most popular tools in this regard. Carol Dweck: 'The whole idea of growth mindset is to say yes they can' Carol Dweck is education’s guru of the moment. The US academic’s “growth mindset” theory has taken schools on both sides of the Atlantic by storm. When TES met the Stanford University psychology professor at the Festival of Education at Wellington College last week, the mere mention of her name was sending teachers into shivers of excitement. But the woman herself is refreshingly modest about the success of her philosophy. “You never know how influential your idea is going to be,” she says, smiling. “It’s really gratifying that people have resonated to it.”

Helping Students Start the School Year With a Positive Mindset For students who have had trouble in school, or who have had a negative summer, it is especially important to get the school year off to a fresh start. And for all students, having a positive mindset makes learning much more likely. Here are four activities to help accomplish these goals. Identity and Purpose: Who Am I? Now that students are back in school, it's a good time to help them refocus on learning, their strengths, and the personal and other resources that will help them succeed. Gardner's Multiple Intelligences Howard Gardner of Harvard has identified seven distinct intelligences. This theory has emerged from recent cognitive research and "documents the extent to which students possess different kinds of minds and therefore learn, remember, perform, and understand in different ways," according to Gardner (1991). According to this theory, "we are all able to know the world through language, logical-mathematical analysis, spatial representation, musical thinking, the use of the body to solve problems or to make things, an understanding of other individuals, and an understanding of ourselves. Where individuals differ is in the strength of these intelligences - the so-called profile of intelligences -and in the ways in which such intelligences are invoked and combined to carry out different tasks, solve diverse problems, and progress in various domains."

Growth Mindset: A Driving Philosophy, Not Just a Tool Picture a high school ELA honors class full of amazing kids who came up through the grades without any struggling, kids who thrive in schools that believe these students would do just fine. It was a class of mine, students who felt initially uncomfortable but were ultimately able to come together and study Kurt Vonnegut's Slaughterhouse-­Five, a novel that presented content and literacy challenges the students weren't used to. How about my son, who entered first grade last year as five-­year-­old, not because I'm a crazy, achievement­-driven parent, but because we had just moved from New York to Massachusetts, which define cutoff ages differently? We thought to put him in with his age group, but the district saw that he'd do better in first grade (he actually tested past second), and his new teacher ran her literacy program using flexible grouping so that all the kids could continually excel as was appropriate.

Classroom Aid Free eTextbooks Collections WikiBooks is the open-content textbooks collection that anyone can edit. The English and German collections have more than 1000 books, while books in many other languages are available too. Like all wiki spaces, it’s a democratic community and collaboration. FreeEtextbooksOnline.com is the source for free eTextbooks. Why Talking About the Brain Can Empower Learners Knowledge about how the brain works can make a big difference when confronting difficult learning situations. If you have a growth mindset and are aware of the ability to improve oneself, a challenge can be welcome (versus those with a fixed mindset who are averse to the failures a challenge may bring). Stanford University professor of psychology Carol Dweck, who has been leading the research in this field, discusses “The power of believing that you can improve” in this TED talk. In one example, she talks about students who made vast improvements on test scores once they learned about the growth mindset: “This happened because the meaning of effort and difficulty were transformed. Before, effort and difficulty made them feel dumb, made them feel like giving up, but now, effort and difficulty, that’s when their neurons are making new connections, stronger connections.

Growth Mindset: How to Normalize Mistake Making and Struggle in Class Carol Dweck’s research on growth mindset has become essential knowledge in education circles. The Stanford psychologist found that children who understand that their brains are malleable and can change when working through challenging problems can do better in school. Now, many school districts are attempting to teach growth mindset to their students. At the core of this practice is the idea of “productive failure” (a concept Dr.

Big Thinkers: Howard Gardner on Multiple Intelligences Howard Gardner: We have schools because we hope that someday when children have left schools that they will still be able to use what it is that they've learned. And there is now a massive amount of evidence from all realms of science that unless individuals take a very active role in what it is that they're studying, unless they learn to ask questions, to do things hands-on, to essentially recreate things in their own mind and then transform them as is needed, the ideas just disappear. The student may have a good grade on the exam. We may think that he or she is learning, but a year or two later there's nothing left. The idea of multiple intelligences comes out of psychology. We have this myth that the only way to learn something is read it in a textbook or hear a lecture on it, and the only way to show that we've understood something is to take a short-answer test or maybe occasionally with an essay question thrown in.