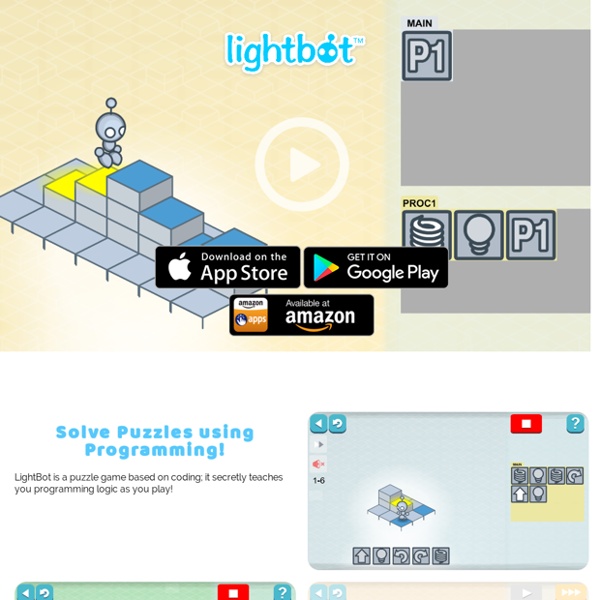 Get to Know the BBC Micro:bit It’s time to take a look at the micro:bit, which is quite the impressive little device, and see what’s packed onto its small surface (4.5 × 5 cm—it’s been billed by the BBC as being about half the size of a credit card). I usually introduce new users to a device like this by examining each component one by one, moving clockwise around the board, and that seems like a perfectly reasonable route to take now. I’ll refer to the side of the micro:bit with the USB power connector and the micro:bit logo as the back, and the side with the array of LEDs and the two push buttons as the front (Figures A and B). Figure A. Back of the micro:bit Figure B.

Awesome Websites to Get Your Kids Hooked on Programming - TheITBros The success stories of people who used MOOCs (Massive Open Online Courses) to pick up new skills and even change careers aren’t exactly rare nowadays. You probably have heard of people learning how to code by signing up for classes on sites like Coursera, eDX, and Udacity, then leveraging the knowledge that they’ve gained to find jobs and/or internships. But what if your ten-year old kid expresses an interest in becoming a computer programmer? Crunchzilla: Code Monster <h2>Code Monster gets kids excited about programming. It is a combination of a game and tutorial where kids experiment with learning to code. <p> Code Monster use Javascript. Please enable Javascript if you want the play with the Code Monster. Otherwise, Code Monster will not be able to play with you. </p><p></h2>

Run Marco! The next chapters of the story are coming soon! Jungle Sequence of commands, iterations, conditions Ancient Temple Introducing Circuit Playground Would you like to learn electronics, with an all-in-one board that has sensors and LEDs built in? Circuit Playground is here, and it's the best way to practice programming on real hardware. No soldering or sewing required! Circuit Playground features an ATmega32u4 micro-processor, just like our popular Flora.

Amazing Space Since it was launched 15 years ago, the Hubble Space Telescope has snapped more than 700,000 images, transmitted about 120 gigabytes of data every week and seen galaxies more than 12 billion light years away. The feats of Hubble have inspired an amazing Web site for students and teachers. Image to right: The Amazing Space Web site ties together many great resources from the Hubble Space Telescope. Credit: NASA Coding in French - Free Printable Coding Blocks It’s a pleasure to have a guest blog post today by Ashley Soltesz, a fellow French teacher who like me is on a mission to share French resources with others so we don’t have to keep recreating the wheel! She’s made some amazing free French printable coding blocks you can use in your classrooms, enjoy! A primary goal for me as a French Language Teacher is for my students to see the relevance in learning to communicate in French, be it in Reading, Writing, or Speaking. I want my students to know that what they do in English, they can do in French and in turn, receive many opportunities because of this skill that they have.

Two Basic iPad Apps for Teaching Coding to Kids November 2, 2014 I got an email today from a teacher asking for some basic iPad coding apps to recommend to her kids. Actually I have already reviewed several coding apps in the past but for something to start with I would suggest the two titles below. Check them out and let us know what you think of them. 1- Daisy The Dinosaur Learn the basics of computer programming with Daisy the Dinosaur! This free, fun app has an easy drag and drop interface that kids of all ages can use to animate Daisy to dance across the screen. Shelver! - Mrs Lodge's Library TPT Bonus Sale! TPT is throwing a bonus sale for back to school tomorrow! Everything in my store is on sale! read more » TPT Sale! I'm having a sale!