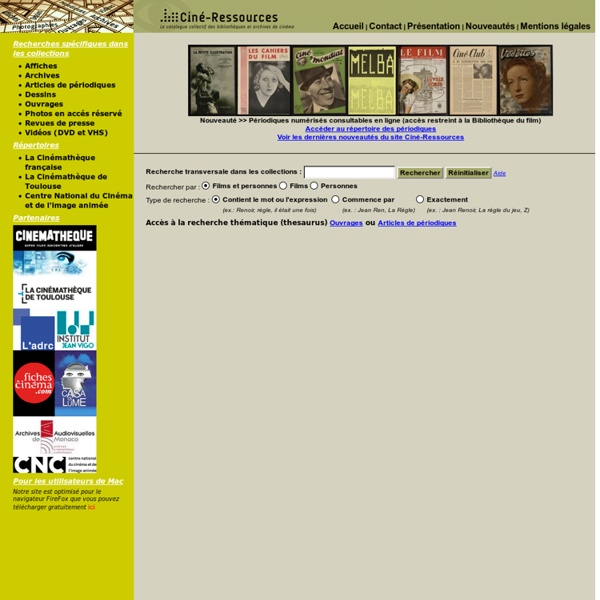 [US] Films & Vidéos / UBUWeb The following films are presented for educational and non-commercial use only. All copyrights belong to the artists. About UbuWeb Film & Video UbuWeb is pleased to present thousands of avant-garde films & videos for your viewing pleasure. However, it is important to us that you realize that what you will see is in no way comparable to the experience of seeing these gems as they were intended to be seen: in a dark room, on a large screen, with a good sound system and, most importantly, with a roomful of warm, like-minded bodies.

Archives Prelinger / archive.org by Castle Films movies eye favorite 162 comment 13 Complete presentation of the banana industry from the clearing of the jungle and the planting to the shipment of the fruit to the American markets. favoritefavoritefavoritefavorite ( 13 reviews ) Topics: Agriculture: Bananas, Central America The Met Collection When The Met was founded in 1870, it owned not a single work of art. Through the combined efforts of generations of curators, researchers, and collectors, our collection has grown to represent more than 5,000 years of art from across the globe—from the first cities of the ancient world to the works of our time. Collection Highlights Browse collection highlights selected by curators from the Museum's seventeen curatorial departments. Open Access Artworks Enjoy more than 406,000 hi-res images of public-domain works from the collection that can be downloaded, shared, and remixed without restriction.

/ubu Editions & Publishing The Unpublishable Edited by Danny Snelson & Kenneth Goldsmith 2003-2010 Bruce Andrews Divestiture - A (1994) Bruce Andrews WhDiP, a sequence from White Dialect Poetry 445pp (PDF, 825k)* [US] Collection de films / Internet Archive movies eye favorite 21 comment 3 Charlie Chaplin's 58th Film Released Dec. 04 1916 The Rink was Charlie Chaplin's 8th film for Mutual Films. Free music samples: download loops, hits and multis from SampleRadar Welcome to SampleRadar, the hub page for MusicRadar's regular giveaway of pro-quality, royalty-free samples. Here you can find links to all of our entries, which feature collections of loops, hits and multisamples in a wide range of genres. And the great news is that you won't have to pay a penny to download any of them. The samples are supplied as WAV files so can be imported directly into your DAW of choice. Because they're royalty-free, you're welcome to use them in your music in any way you like - all we ask is that you don't re-distribute them.