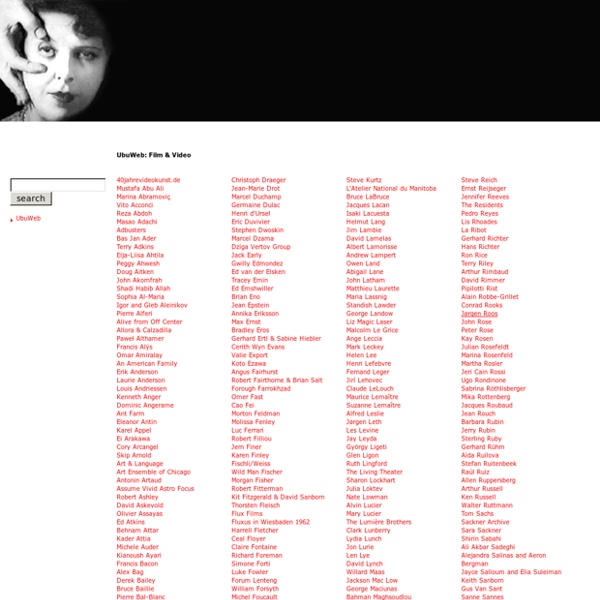 The following films are presented for educational and non-commercial use only. All copyrights belong to the artists. About UbuWeb Film & Video UbuWeb is pleased to present hundreds of avant-garde films & videos for your viewing pleasure. However, it is important to us that you realize that what you will see is in no way comparable to the experience of seeing these gems as they were intended to be seen: in a dark room, on a large screen, with a good sound system and, most importantly, with a roomful of warm, like-minded bodies. However, we realize that the real thing isn't very easy to get to. We realize that the films we are presenting are of poor quality. Please support these filmmakers and their distributors by purchasing their films. Distributors: Founded in 1962 and located in New York City, The Film-Maker's Cooperative distributes more than 5,000 films in all gauges as well as videos: www.film-makerscoop.com Venues: The following is a very short list of venues. Eyedrum (Atlanta) UbuWeb

UBU films - Sydney Undergroud Movies 1965-1970 Disque 1: Blunderball (1966)Man and His World (1966)Puncture (1966)Halftone (1966)Rita and Dundi (1966)The Film (1966)Bluto (1967) Disque 2: BACK TO THE FUTURE : Irina Werning I love old photos. I admit being a nosey photographer. As soon as I step into someone else’s house, I start sniffing for them. Most of us are fascinated by their retro look but to me, it’s imagining how people would feel and look like if they were to reenact them today… Two years ago, I decided to actually do this. So, with my camera, I started inviting people to go back to their future.. Now its time for KOREA, TAIWAN AND TOKYO.

Create an Optical Illusion in Your Home : Cube Switchplates The Cube Switchplates from The Curiosity Shoppe is a new funny idea than can Cube Switchplates turn your wall into an optical illusion. This idea would make your home a very cool place, and I’m pretty sure that all your visitors will ask you about these switchplates. Simply swap them out with your current, boring hardware and you’ll have the coolest outlet or lightswitch in town.

HISTORY CHANNEL First to purchase will own this one of a kind asset 1,538 Customers shopping on HugeDomains right now! 73% of all domains registered on the Web are .coms. The reason is simple: .com is the where most of Web traffic happens. Owning a premium .com gives you great benefits including better SEO, name recognition, and providing your site with a sense of authority. The one and only .com name of it's kind Return it within 30 days if you're not satisfied Immediate ownership transfer Creates instant branding and credibility Cinema of the World Quote: UBU Films was a Sydney-based independent film-making co-operative which operated from 1965 to around 1970. Its members produced many of the most important experimental and underground films made in Australia in the Sixties. Ubu was also a pioneer of psychedelic lightshows in Australia, and during the late Sixties the UBU collective was Sydney’s leading lighting provider for dances, discos and other special events. Formed by Albie Thoms, David Perry, Aggy Read and John Clark at Sydney University in 1965, UBU FILMS was Australia’s first group dedicated to making, exhibiting and distributing experimental films. Although these four are considered the key members, the UBU circle took in many young film-makers who were to become very prominent in later years including Matt Carroll, Peter Weir, Phillip Noyce and Bruce Beresford.

Jonas Mekas October 17, 2012 – 1:57 pm Turn of the Year Update October 15, 2012 – 10:59 am Switchplates Switchplates were the March 2008 theme for my Out of the Box creativity challenge. I took some in progress photos but not a full-blown tutorial. I even forgot to take a stylized photo of the one I traded that night, very unlike me! Fortunately making these are extremely addictive so I had plenty more for that purpose. Guess which is Leil’s and which is Caitlin’s? Feel free to ask questions about missing steps.