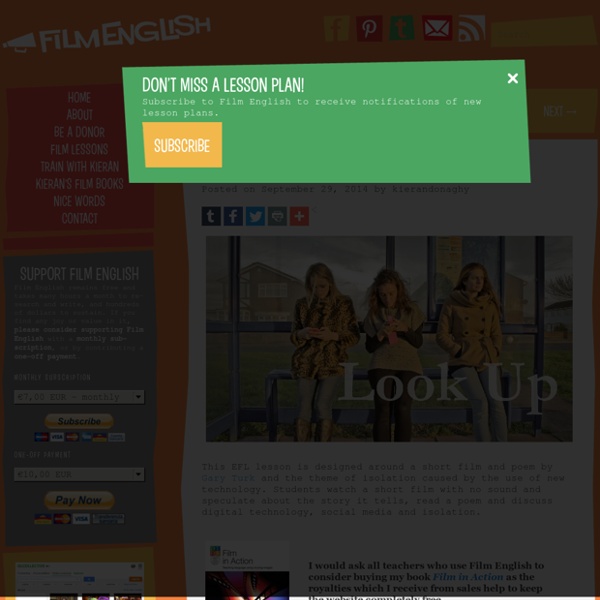 This EFL lesson is designed around a short film and poem by Gary Turk and the theme of isolation caused by the use of new technology. Students watch a short film with no sound and speculate about the story it tells, read a poem and discuss digital technology, social media and isolation. I would ask all teachers who use Film English to consider buying my book Film in Action as the royalties which I receive from sales help to keep the website completely free. Language level: Upper Intermediate (B2) – Advanced (C1) Learner type:Teens and adults Time: 90 minutes Activity: Watching a short film, reading a poem and speaking Topic: Digital technology and isolation Language: Vocabulary related to digital technology and social media Materials: Short film and poem Downloadable materials: Look up lesson instructions look up poem Support Film English Film English remains free and takes many hours a month to research and write, and hundreds of dollars to sustain. Step 1 Show the film and pause at 02:22. Step 2

What’s on your mind? This EFL lesson is designed around a short film by Shaun Higton and the theme of Facebook. Students practise vocabulary related to social media, watch a short film, and talk about Facebook. Step 1 Give the students the social media vocabulary worksheet. The Seven Best Silent Short Films for Language Teaching - Kieran Donaghy As many short films are artistic, they have limited appeal in the commercial marketplace and are funded from diverse sources. To make them easier to sell worldwide, they often contain little or no dialogue, which makes comprehension much easier. As a result, they offer intensely ‘filmic’ experiences, using images and movement, sequence and duration, sound and music to tell their stories. These silent films are perfect for the language classroom as they can be used with any level – the teacher just needs to adapt the difficulty of the task to match the level of the students. Here are the seven short films which I have found work best in the language classroom. Your Secret

All of Me by John Legend In this song John Legend uses opposite meanings to convey how he feels about his wife. It is a very ‘honest’ love song. I think it reflects real life rather than a fairytale version of a relationship. This provides a good opportunity for students to discuss love songs, identify the opposite meanings and then interpret what the songwriter really means. Students then use what they have learned to talk about their own loved ones.

The Amazing Race: English Edition – The Canswedian English Teacher I teach a class where the students don’t receive a grade… It is for students who don’t take Spanish, French or German and have extra English/Swedish instead. At times I am left banging my head against the wall – or grumbling a few choice words – because the class lacks the structure and drive I so crave in my regular English classes. My co-teacher and I work fantastic together, and have tried to do what we can with them. However, I am constantly asking myself – how am I supposed to encourage the students and make them realize that they should give a hooey about these oh-so-important-lessons?! All Quotes Coloring Pages Here are all quotes coloring pages. I have had so much fun drawing these and hope you can find joy in coloring them in and displaying them. There are quite a few, so I am sure you are going to be able to find at least a couple that will get you inspired and motivated.

Describing photos (comparing, contrasting and speculating) You are going to practise language for; Describing photosComparing and contrasting photos (discussing similarities and differences)Speculating on what might be happeningReacting to photos (giving opinions) Discuss Look at the presentation. Follow the instructions and talk about some of the photos Write The language used here for comparing and contrasting / speculating is also useful for writing discussion / argument essays. Plan: The Other Pair This ELT lesson plan is designed around a short film by Sarah Zorik titled The Other Pair and the themes of altruism and empathy. Students watch a short film, write a story, and speak about a story. I would ask all teachers who use Film English to consider buying my book Film in Action as the royalties which I receive from sales help to keep the website completely free. Language level: Pre-intermediate (A2) –Intermediate (B1) Learner type: All ages

How can film help you teach or learn English? What can film and video add to the learning experience? Kieran Donaghy, who won the British Council’s TeachingEnglish blog award tells us why film is such a good resource and recommends some useful websites, in one of our top five articles of all time, illustrated by artist Jamie Johnson. Language teachers have been using films in their classes for decades, and there are a number of reasons why film is an excellent teaching and learning tool. Learning from films is motivating and enjoyable Motivation is one of the most important factors in determining successful second-language acquisition. Films and TV shows are an integral part of students’ lives so it makes perfect sense to bring them into the language classroom.

extr@ English extr@ English promises language learning with laughter, in an authentic London setting. With 30 hilarious, half-hour sitcom programmes, the extra@ series is a delight for anyone learning English, especially young adults. The adventures of the four main characters in their London flat are stylish, sexy and funny. The extr@ series is equally at home in the language class and with friends and family, making it ideal for teacher-led and self-study language learning. The programmes feature lively, colloquial English dialogue. Homepage Skin is a new film due to be released July 2009. It concerns the compelling and moving tale of Sandra Laing, born in 1955 to white Afrikaner parents in South Africa. Thanks to the chance combination of her parents’ genes, Sandra was dark-skinned , had thick curly hair and black-African features. None of this would have mattered very much in a different time or place, but in the South Africa of half-a century ago Sandra’s appearance was hugely controversial. Skin follows Sandra’s thirty-year journey from rejection to acceptance, betrayal to reconciliation, as she struggles to define her place in a changing world — and triumphs against all odds. These materials are designed to complement the film drawing out some of its many potential benefits as a teaching resource not only of great value to media and English groups but also as the launch pad for history, citizenship, PSHE and science lessons focused on genetics.