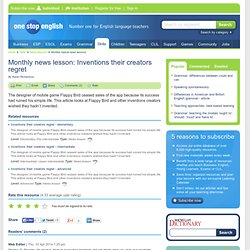 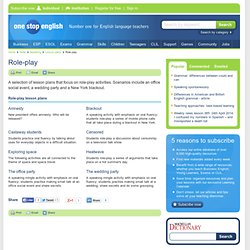 Scenarios include an office social event, a wedding party and a New York blackout. AmnestyNew president offers amnesty. Tongue Twisters 1 ((b,v,s,t,th) Lesson plans. A set of lesson plans and worksheets for use in first lessons in business English. 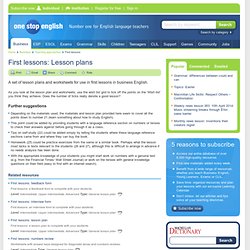 As you look at the lesson plan and worksheets, use the wish list grid to tick off the points on the ‘Wish list’ you think they achieve. Does the number of ticks really denote a good lesson? Further suggestions Depending on the materials used, the materials and lesson plan provided here seem to cover all the points down to number 21 (learn something about how to study English).This point could be added by providing students with a language reference section on numbers or tenses to check their answers against before going through it as a class.Tips on self-study (22) could be added simply by telling the students where these language reference sections came from and where they can buy the book.Homework (25) could be practice exercises from the same or a similar book. 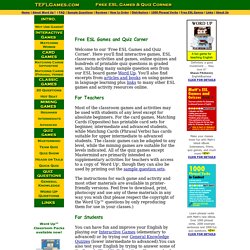 Here you'll find interactive games, ESL classroom activities and games, online quizzes and hundreds of printable quiz questions in graded sets, including many sample question sets from our ESL board game Word Up. You'll also find excerpts from articles and books on using games in language learning plus links to many other ESL games and activity resources online. For TeachersMost of the classroom games and activities may be used with students of any level except for absolute beginners. For the card games, Matching Cards (Opposites) has printable card sets for beginner, intermediate and advanced students, while Matching Cards (Phrasal Verbs) has cards suitable for upper intermediate to advanced students.

The classic games can be adapted to any level, while the miming games are suitable for the levels indicated. Brilliant toilet! In this activity, students hear about a strange restaurant recommendation. 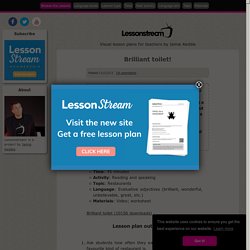 They watch a video in which Paul talks about a friend’s suggestion to visit a new restaurant in town specifically because of its brilliant toilet. But what could be so special about a toilet? And why is Paul offended by the recommendation? The Quiet American Study Guide & Plot Summary. The Quiet American Summary & Study Guide includes comprehensive information and analysis to help you understand the book. 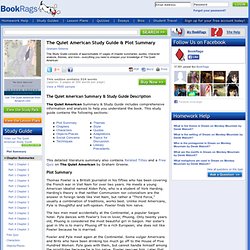 This study guide contains the following sections: This detailed literature summary also contains Related Titles and a Free Quiz on The Quiet American by Graham Greene. Thomas Fowler is a British journalist in his fifties who has been covering the French war in Viet Nam for over two years. He meets a young American idealist named Alden Pyle, who is a student of York Harding. Harding's theory is that neither Communism nor colonialism are the answer in foreign lands like Viet Nam, but rather a "Third Force," usually a combination of traditions, works best. The two men meet accidentally at the Continental, a popular Saigon hotel. Fowler and Pyle meet again at the Continental.

Fowler goes to the city of Phat Diem to cover a battle there. Pyle comes to Fowler's place and they ask her to choose between them. U.S.A. Learns. Learn English, anytime day or night. 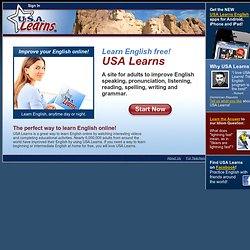 A site for adults to improve English speaking, pronunciation, listening, reading, spelling, writing and grammar. Start Now. Free ESL games, printable communication games, free english games to download, grammar games, printable board games for the classroom. MES English Certificate Templates Printable Cards Phonics Worksheets Worksheet Makers ESL Listening End User License Agreement: You are free to download any resource from this site as an end user and MES-English.com grants you an End User License with the following restrictions: You may not redistribute, copy, modify, transfer, transmit, repackage, charge for or sell any of the materials from this site. 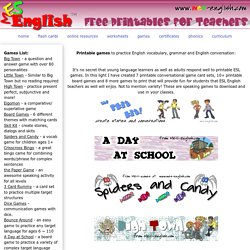 You may use photocopies or printouts for distribution to your students. MES reserves the right to terminate or make changes to this agreement for any reason and without notice. Be Careful What You Tweet – A Guest Lesson By Nermeen Alireza. A designer lessons ESL Lesson plan developed by Nermeen Alireza I’m honoured to be posting my first guest lesson on Designer Lessons. 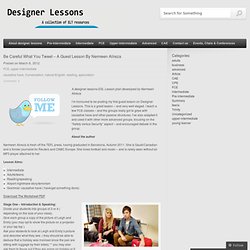 This is a great lesson – and very well staged. I teach a few FCE classes – and the groups really got to grips with causative have and other passive structures. I’ve also adapted it and used it with other more advanced groups, focusing on the “Safety versus Security” aspect – and encouraged debate in the group. About the author Nermeen Alireza is fresh off the TEFL press, having graduated in Barcelona, Autumn 2011. Tiny TEFL Teacher Home. By Jamie Keddie » Search Results » Learn and Teach English with Movies from the Internet Archive. 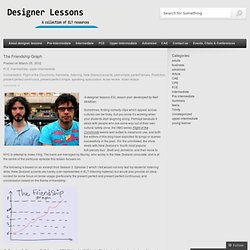 Perhaps because it deals with people who are some way out of their own cultural safety zone, the HBO series Flight of the Conchords seems well suited to classroom use, and both the editors of this blog have exploited its songs or scenes successfully in the past. For the uninitiated, the show deals with New Zealand’s ‘fourth most popular folk-parody duo’, Brett and Jermaine, and their move to NYC to attempt to make it big. The band are managed by Murray, who works in the New Zealand consulate, and is at the centre of the particular episode this lesson focuses on. (E=Enemies, S=Strangers, C=Colleagues,WM=Workmates, F=Friends. Stage 1. Teacher Training Blog.

Developing Dynamic Units For EFL. Designer lessons. Things 2 do b4 u die. This activity deals with bucket lists – wishlists of things to do before you die (or ‘kick the bucket’). For example: participate in a demonstration; appear on the front cover of a newspaper; be an extra in a film; do a runner from a restaurant; get arrested; photocopy your bottom at work. Language level: Intermediate (B1) +Learner type: Mature teens; AdultsTime: 90 minutesActivity: Grammar drill; SpeakingTopic: Life & deathLanguage: ‘Have you ever …?’

Questions; Past simple questions; Pronunciation of regular past participlesMaterials: Materials freeThings 2 do b4 u die. English Teaching Forum 2007, Volume 45, Number 2. 50 Teaching and Lesson Plans that Rock 8/7. Murder Winks. Directions: The students stand in a circle, and one of them will be the "murderer". This student will "murder" other students by winking at them. To choose the murderer, you can either a) have them close their eyes, walk around the circle, tapping one student on the back, or b) put one square of paper for each student in a hat, writing "murderer" on one piece and "innocent" on all the others; the students silently choose a piece of paper to determine who is the murderer. Now the game begins. If the murderer "winks" at a student who is looking back at him/her, then the student is "dead" and must sit down.

(The "dead" student can exaggerate his/her death, but must not reveal who the murderer is.) As more and more people "die" and the group gets smaller, it gets very difficult to be the murderer without getting caught. Tools for ESL Lesson Planning. EFL/ESL Lessons and Lesson Plans from The Internet TESL Journal. If you have a lesson that you are willing to contribute, please submit it.See the main page for this month's lessons plans. Home | Articles | Lessons | Techniques | Questions | Games | Jokes | Things for Teachers | Links | Activities for ESL Students Some of the articles on Teaching Techniques also include ideas for lessons. Search. ESL Resources - The Common Core Conversation. Free ESL (English as a Second Language) Lesson Plans to Download. This page was originally designed to share my materials with other English teaching assistants in France, especially those who have no experience in teaching ESL yet.

I've also included worksheets that I used for private English lessons in France as well as some of the materials I used in my ESL classes in the United States. Feel free to use them as you'd like. Some of the lessons listed under the Assistant section can also be used for private lessons and vice versa. Lessons and Tests Reading, Listening, Speaking (All Levels) Speaking Excersises (Everyday English in Conversation: Communication) No, It’s Not Arbitrary and Does Make Sense: Teaching the English Punctuation System. You might also try putting a period at the end of a “thought.” And what about semi-colons and colons? Well…maybe those are for exceptionally long breaths and thoughts? Okay, I guess you can see that these are no official “Strunk and White” rules about usage but rather the kind of myths about standard punctuation that are perpetuated, sometimes by educators, I’m afraid.

Add to this the concern that writers, such as novelist and poets, often employ their own creative punctuation: for example, poet e.e. cummings wrote in all lower-case; popular novelist Stephen King, a former English teacher, writes long, run-on sentences to indicate stream-of-consciousness thought. So by the time students come onto a college campus, they’re often under the impression that punctuation doesn’t matter, or is arbitrary, and makes no sense—sometimes all three.