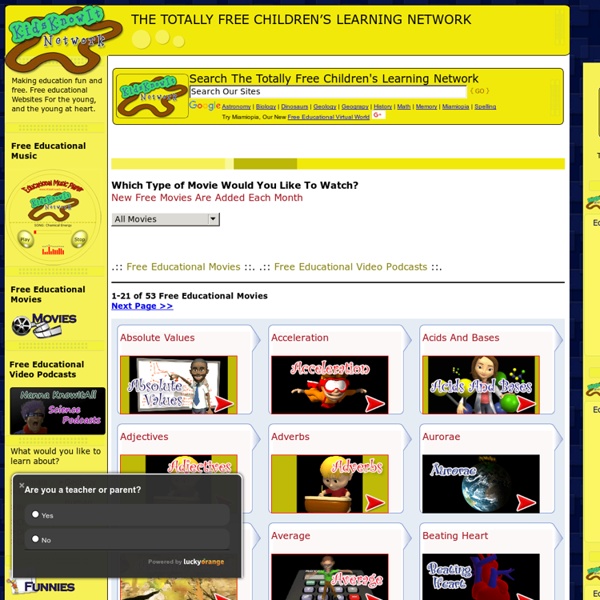 Our Free Educational Movies bring your student on a fun and interactive journey through the world around us. Each movie begins by introducing students to the topics that they will be learning about, and ends with an online quiz. In order to successfully complete each online video, your student must watch, and then successfully answer the quiz questions with 80% or higher accuracy. Students who do not obtain 80% comprehension will be instructed to watch the movie a second time, and then again try to answer the quiz questions.

How to Build a Pallet Daybed The highlight of My New Backyard patio redecorating scheme has most definitely been this pallet daybed. I really wanted a place to sleep outside with my daughter, and a comfy couch to relax on with friends. I didn’t have the funds to invest in a fancy piece of outdoor furniture, and I knew that with the weather as it is in Los Angeles, I could leave this outside pretty much all summer. I also knew that I would, at some point, need to move it under the awning to keep it dry, so I put it on wheels. And finally, I knew I would need arms, because I’m just not comfy on a couch without arms.

Must Watch Documentaries About The U.S. Real Scientific Evidence of Controlled Implosion "The preconceived notion of NIST is that there's no evidence for explosives, as in there is no point in looking. That is the most unscientific thing which you can possibly think of. Not to look because you don't expect to find evidence and in fact the evidence is overwhelming. Edmodo Scavenger Hunt Video Playlist I finally decided to do something that I been putting off for too long - finishing my scavenger hunt videos (I only had three left to record, and it took me less than 5 minutes - shesh) and adding the last 8 mini-videos to my MentorMob playlist. So I did it today! I decided to do an edmodo scavenger hunt because some of my students will be familiar with edmodo (because I had them last year and we used it) and some of my students have most likely never heard of it (Some of my students last year did talk about it to students who weren't in my class). I decided to break the scavenger hunt into steps (18 to be exact) and include a checklist on paper so my students could check it off as they go and get a visual of their progress. Most of the videos are under 2 minutes (Step 12 or 13- can't remember which - is 5 minutes). Create your own Playlist on MentorMob!

7 Active Icebreakers to Get Your Students Up and Moving It doesn’t matter what time of year it is, active icebreakers are always a good idea. Join our Facebook Live event this week to see some of these icebreakers in action, courtesy of Joe Dombrowski and Jessica Rogers. Joe is a self-described unconventional teacher, and he strongly encourages thinking outside the box when it comes to teaching. Jessica is a Chicago-area educator and improv instructor. Below, Joe and Jessica shared some of their favorite active icebreakers to use with their students.

Authentic video in the classroom: Ireland II My second example of utilising authentic video in the EFL classroom is based on the same 50-minute travel video as my first. Of course, one can apply this to any video, but this time I will stick with Ireland. How I do it now will, however, differ from my last post because now I’ll concentrate on the language and vocabulary awareness in detail (but I wouldn’t use both methods on the same video in the same class, though). Wikis These four friends are going on a camping trip. They need to bring the right supplies because they're backpacking. The group needs to plan and plan well, so coordination is key. what is kimchi: top 5 reasons why you should try it With the Korean culture gaining worldwide status, many Filipinos and non-Asian nationalities have started to embrace the Hallyu Wave in terms of music, fashion, skin care and especially food. It all started with the increasing popularity of Korean Barbecue places being built around the metro and everyone going crazy about grilling meat and pairing with lettuce, complementary sauces, and side dishes. One of the most popular and healthiest Korean side dishes is Kimchi, most people love it and some hate it. But what is Kimchi anyway? Kimchi is a traditional Korean food or side dish that mainly consists of cabbage, onions, and garlic. Some who make the dish even add radish and cucumber for extra health benefits and taste.

Using digital video for cultural and linguistic awareness in ELT – an unofficial introduction Technology as such and technological skills in particular are not crucial for teachers to use digital video to enhance cultural and target language awareness in ELT. The main point is actually multitasking in the sense of the students using multiple senses simultaneously in order to absorb and handle the information given. Listening, reading, writing, speaking and even getting emotionally involved are at the centre of language learning. And whereas videos, be it fictional films, documentaries or newsflashes, have long been recognized as a useful tool in the language classroom, their place in the curriculum have been marginal, because so much information is given in such a short time span that it has been impossible to utilize them effectively in ELT. Therefore they have mainly been used as complementary sources of information or as a means of tuning in to a particular subject.