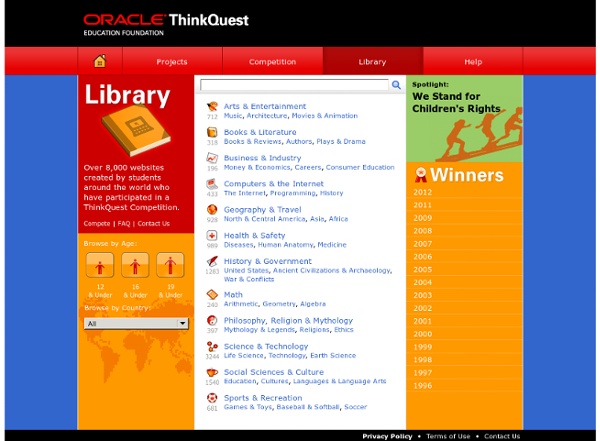 As of July 1, 2013 ThinkQuest has been discontinued. We would like to thank everyone for being a part of the ThinkQuest global community: Students - For your limitless creativity and innovation, which inspires us all. Teachers - For your passion in guiding students on their quest. Partners - For your unwavering support and evangelism. Parents - For supporting the use of technology not only as an instrument of learning, but as a means of creating knowledge. We encourage everyone to continue to “Think, Create and Collaborate,” unleashing the power of technology to teach, share, and inspire. Best wishes, The Oracle Education Foundation

Make Handwriting Worksheets - ESL Writing Wizard The Writing Wizard is a free resource for teachers and homeschooling moms and dads. If you like the Writing Wizard, please tell your friends, mention it in your blog, or link to it from your own website. Having gone through those steps, you should be pretty familiar with what the Writing Wizard can do. So, whether you are making writing practice worksheets for kindergarten or elementary school children, in D'Nealian or Zaner-Bloser, in cursive or manuscript, you should now be able to come up with something. Utopian socialism Utopian socialism is a term used to define the first currents of modern socialist thought as exemplified by the work of Henri de Saint-Simon, Charles Fourier, and Robert Owen, which inspired Karl Marx and other early socialists.[1] However, visions of imaginary ideal societies, which competed with revolutionary social-democratic movements, were viewed as not being grounded in the material conditions of society and as reactionary.[2] Although it is technically possible for any set of ideas or any person living at any time in history to be a utopian socialist, the term is most often applied to those socialists who lived in the first quarter of the 19th century who were ascribed the label "utopian" by later socialists as a negative term, in order to imply naivete and dismiss their ideas as fanciful or unrealistic.[3] Forms of socialism which existed in hunter-gatherer societies are referred to as primitive communism by Marxists.[4] Definition[edit] Development[edit] Ursula K. Corning, Iowa

Intentional community Characteristics[edit] Purpose[edit] The purposes of intentional communities vary in different communities. They may include sharing resources, creating family-oriented neighborhoods and living ecologically sustainable lifestyles (ecovillages). Many intentional communities focus on the importance of living and sharing life together, as opposed to the perceived trend of independence in Western culture. Types of communities[edit] Meditation & The Science of Brainwaves Technology Meditation is generally an internal, personal practice and done without any external involvement, except perhaps prayer beads to count prayers, though many practitioners of meditation may rely on external objects such as candle flames as points on which to focus their attention as an aid to the process. Meditation often involves invoking or cultivating a feeling or internal state, such as compassion, or attending to a specific focal point. The term can refer to the state itself, as well as to practices or techniques employed to cultivate the state. “Meditation brings wisdom; lack of meditation leaves ignorance.

Evgenii Kazartsev Visiting Associate Professor Winter & Spring 2013 Eugene Kazartsev was born in St. Petersburg 12/19/1972, doctor of philology, associate professor, expert in Russian literature, in comparative metrics and prosody and in the history of the Slavic and European Verse, the poet. Additional information about me Humboldt-foundation Matling.amoti 124 Sites For Free Children's Books Online Introduction This is a listing of 234 sites that legally offer free ebooks for children to read. There is a separate listing of audio books for children at Best Free Audio Books Online For Children. (72 sites) This page is geared towards younger children. I recently added a page of site listings for

Commons-based peer production The term is often used interchangeably with the term social production. Overview[edit] The history of commons-based peer production communities (by the P2Pvalue project) Tao Te Ching - Translated by J. Legge The Tao that can be trodden is not the enduring and unchanging Tao. The name that can be named is not the enduring and unchanging name. (Conceived of as) having no name, it is the Originator of heaven and earth; (conceived of as) having a name, it is the Mother of all things. Always without desire we must be found, If its deep mystery we would sound; But if desire always within us be, Its outer fringe is all that we shall see. Southern Virginia University Southern Virginia University (SVU) is a liberal arts college located in Buena Vista, Virginia. The school, though not officially affiliated with a particular faith, embraces the values of The Church of Jesus Christ of Latter-day Saints (LDS Church). It was founded in 1867 as a school for girls, and is now a private four-year coeducational institution. While the majority of students are members of the LDS Church, students of all faiths are welcome on campus and are encouraged to be active in their own faith.[5] The university is regionally accredited by the Southern Association of Colleges and Schools and is nationally accredited by the American Academy for Liberal Education.[6][7][8] The campus consists of more than 155 acres (0.63 km2). History[edit] In 1919, Robert Lee Durham, former dean of Martha Washington College, bought a half-interest in Southern Seminary and became the resident head of the school.

Collaboration Act of working together Catalan castellers collaborate, working together with a shared goal Collaboration (from Latin com- "with" + laborare "to labor", "to work") is the process of two or more people, entities or organizations working together to complete a task or achieve a goal.[1] Collaboration is similar to cooperation. How to See the Aura So… picture this. Imagine if you walked around your normal day, like you always do… going to the grocery store, going to work, walking down the street… and every single person you saw had this big, glowing light around them. Maybe you could see colors, or soft, beautiful ethereal wisps of soft hair-like energy, or strange watery funnels like something out of Donny Darko… but this illuminating, halo glow, was there, right in front of your eyes. What if you could see this incredible energy, these auras, around everyone?