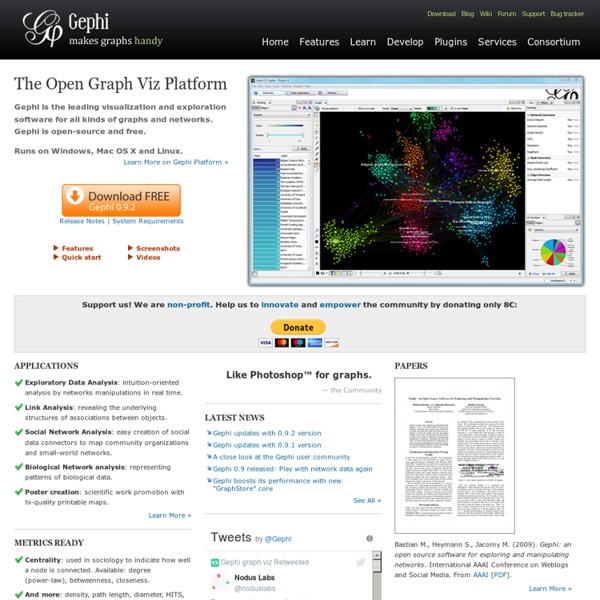 Blog Announcement Community ~ gsoc It’s a great news, Gephi has been accepted again for the Google Summer of Code for the 5th year! The program is the best way for students around the world to start contributing to an open-source project. Since 2009, each edition is a great success and dramatically boosted Gephi’s project development. What is Gephi?

CopyQ CopyQ is advanced clipboard manager with editing and scripting features. Overview CopyQ monitors system clipboard and saves its content in customized tabs. 30 Simple Tools For Data Visualization There have never been more technologies available to collect, examine, and render data. Here are 30 different notable pieces of data visualization software good for any designer's repertoire. They're not just powerful; they're easy to use. In fact, most of these tools feature simple, point-and-click interfaces, and don’t require that you possess any particular coding knowledge or invest in any significant training. Let the software do the hard work for you. Social network analysis software Social network analysis software (SNA software) is software which facilitates quantitative or qualitative analysis of social networks, by describing features of a network either through numerical or visual representation. Overview[edit] Some SNA software can perform predictive analysis.[5] This includes using network phenomena such as a tie to predict individual level outcomes (often called peer influence or contagion modeling), using individual-level phenomena to predict network outcomes such as the formation of a tie/edge (often called homophily models[6]) or particular type of triad, or using network phenomena to predict other network phenomena, such as using a triad formation at time 0 to predict tie formation at time 1. Network analysis software generally consists of either packages based on graphical user interfaces (GUIs), or packages built for scripting/programming languages. GUI packages are easier to learn, while scripting tools are more powerful and extensible. See also[edit]

Exploring Big Historical Data: The Historian's Macroscope Welcome to the companion site for Exploring Big Historical Data: The Historian’s Macroscope, published by Imperial College Press. If you want to buy a copy, you can purchase one for $39.00 USD. Feel free to visit our original live-written fully open draft website, which is still online – and if you like what you see, you can always buy the book! Venn Templates and Venn Diagram Software - Free and no download required with Gliffy Online A Venn diagram is a simple way to represent the relationships between groups of things with a clear, visual display. Let your ideas overlap In a Venn diagram, large circles represent groups of things with a shared attribute. Areas where these circles overlap represent individuals that belong equally to both groups. For example, a Venn diagram with one circle representing things made with yeast and another representing alcoholic beverages would have an overlapping zone where you could find both beer and wine. Circles in a Venn diagram can overlap partially, overlap completely, or even be totally separate — letting the viewer see the relationship between the groups at a glance.

ExifTool - A Viewer for Camera Exif data Digital camera image files contain Exif data (Exif is Exchangeable image file format). This data describes the format of the image data. The camera is the source, and the value to camera users is that the camera settings are also recorded in the Exif data. Visualising Data » Resources Here is a collection of some of the most important, effective, useful and practical data visualisation tools. The content covers the many different resources used to create and publish visualisations, tools for working with colour, packages for handling data, places to obtain data, the most influential books and educational programmes and qualifications in visualisation itself. * Please note there are another 40-50 items to add to these collections but they are going to be saved for now and launched alongside the new version of this website around April * Data and visualisation tools Resources and learning references

Navicrawler UPDATE: There now a portable version of Firefox with Navicrawler included: More information on these: These folders are zipped. Unzip and run “Firefox Portable”. You might have some obvious messages, and after that you have a fully functionnal Firefox 3.6 with Navicrawler installed.These are portable apps, it means that they do not interfere with other versions of Firefox that you might have. They do not install, you have to run them from their folder.Two other extensions are also installed: Flem and Greasemonkey.

Historical Network Research 1) Start with some introductory texts on Social Network Analysis Among the general HNR articles in the Bibliography, Scott Weingart’s blog post series “Networks Demystified” and Claire Lemercier’s article “Formal network methods in history” are particularly useful to get you ideas. To get a first idea of Social Network Analysis terminology and concepts, you may find this Cheat Sheet helpful. A great resource which will help you understand what you can expect from Social Network Analysis is Valdis Krebs’ Network Discovery Matrix. 2) Find answers to these questions: 1.

Data Visualization Review: Gephi, Free Graph Exploration Software I do not often get to play with networks, yet I find them fascinating and full of knowledge gathering potential. The data visualization works of Moritz Stefaner, Jer Thorp, and Mark Lombardi captivate me. I am intrigued by relationships, how we perceive them, and how we can understand them.