The “+1″ Mobile Game Design Strategy (Gamasutra) History and Context: In the winter of 2008, I launched my first game: it was a social game on Facebook and MySpace called League of Heroes. 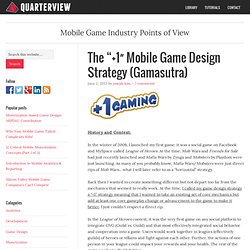 At the time, Mob Wars and Friends for Sale had just recently launched and Mafia Wars by Zynga and Mobsters by Playdom were just launching. As many of you probably know, Mafia Wars/Mobsters were just direct rips of Mob Wars... what I will later refer to as a “horizontal” strategy. Back then I wanted to create something different but not depart too far from the mechanics that seemed to really work.

At the time, I called my game design strategy a “+1″ strategy meaning that I wanted to take an existing set of core mechanics but add at least one core gameplay change or advancement to the game to make it better. In the League of Heroes context, it was the very first game on any social platform to integrate GVG (Guild vs. “Horizontal” vs. Progress comes in two flavors: horizontal/extensive and vertical/intensive. Why Your Mobile Game Failed: Complexity Kills!

One of the most difficult problems in designing any game is how to address complexity in the game design. 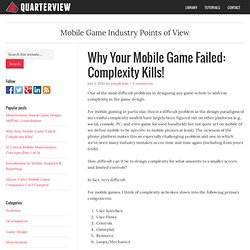 For mobile gaming in particular, this is a difficult problem as the design paradigms of successful complexity models have largely been figured out on other platforms (e.g., social, console, PC, and even game focused handheld) but not quite yet on mobile (if we define mobile to be specific to mobile phones at least). The newness of the phone platform makes this an especially challenging problem and one in which we’ve seen many industry mistakes occur time and time again (including from yours truly). How difficult can it be to design complexity for what amounts to a smaller screen and limited controls? In fact, very difficult. For mobile games, I think of complexity as broken down into the following primary components: User InterfaceUser FlowsControlsGameplayResourceLoops/Mechanics Successful Complexity Patterns in Mobile Games: So What?

Evan Todd's Blog - The Poor Man's Gameplay Analytics. The following blog post, unless otherwise noted, was written by a member of Gamasutra’s community. The thoughts and opinions expressed are those of the writer and not Gamasutra or its parent company. You don't want to take time away from your awesome game to write boring analytics code.

So you either call up some friends, hire playtesters, integrate some 3rd party SDK (ugh), or just do without. WRONG. You roll your own solution. Why you don't do without The OODA loop models the way human individuals and groups operate. Observe the situation Orient your observations in the context of goals, past experience, etc. After the initial act of creation, game developers operate under the same principle. Clash.jpg (532×416) Core+loop.jpg (624×467) Tino van der Kraan's Blog - The recipe behind Cookie Clicker. The following blog post, unless otherwise noted, was written by a member of Gamasutra’s community. 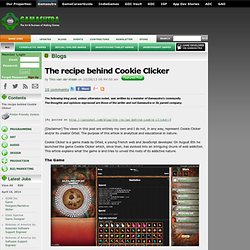 The thoughts and opinions expressed are those of the writer and not Gamasutra or its parent company. [As posted on [Disclaimer] The views in this post are entirely my own and I do not, in any way, represent Cookie Clicker and/or its creator Orteil. The purpose of this article is analytical and educational in nature. Cookie Clicker is a game made by Orteil, a young French web and JavaScript developer. X-COM to XCOM: 20 Years of Turn-Based Strategy, Alien-Killing, and DREAD. Persistent myths about Game Design. The straw man concept of game design involves the sole genius game designer who writes his thoughts on a golden tablet and passes it down to the production minions to build. 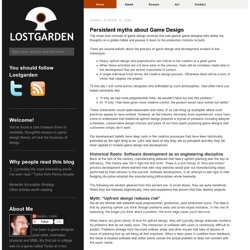 There are several beliefs about the process of game design and development evident in this stereotype. Heavy upfront design and preproduction are critical to the creation of a great game. When these activities are not done early in the process, there will be mistakes made later in the development that are almost impossible to correct. A single individual must drives the creative design process. Why good FOV options are crucial to PC games - IncGamers.com. For PC players who can’t tolerate a narrow Field of View (FOV,) it’s been a difficult few weeks. 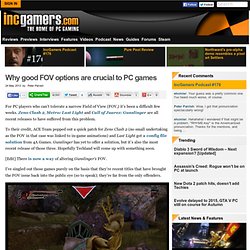 Zeno Clash 2, Metro: Last Light and Call of Juarez: Gunslinger are all recent releases to have suffered from this problem. To their credit, ACE Team popped out a quick patch for Zeno Clash 2 (no small undertaking as the FOV in that case was linked to in-game animations) and Last Light got a config file solution from 4A Games. Gunslinger has yet to offer a solution, but it’s also the most recent release of those three. Hopefully Techland will come up with something soon. [Edit] There is now a way of altering Gunslinger’s FOV. I’ve singled out those games purely on the basis that they’re recent titles that have brought the FOV issue back into the public eye (so to speak); they’re far from the only offenders. If only you could punch the FOV in the face too. In fact, it’s a regular problem PC players have to deal with. Examining the intersection of psychology and video games.