Recruiting Great Talent Is the Core of the Netflix HR Revolution. How did Netflix reinvent HR? 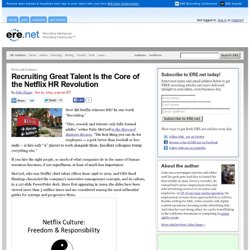 In one word, “Recruiting.” “Hire, reward, and tolerate only fully formed adults,” writes Patty McCord in the Harvard Business Review. “The best thing you can do for employees — a perk better than foosball or free sushi — is hire only “A” players to work alongside them. Excellent colleagues trump everything else.” If you hire the right people, so much of what companies do in the name of human resources becomes, if not superfluous, at least of much less importance. McCord, who was Netflix’ chief talent officer from 1998 to 2012, and CEO Reed Hastings chronicled the company’s innovative management concepts, and its culture, in a 127-slide PowerPoint deck.

McCord’s article, “How Netflix Reinvented HR,” details the thinking behind such formerly radical notions as unlimited vacation time and the still-edgy notion that Performance Improvement Plans and annual reviews are pointless, if not counterproductive. These are just some of the ideas Netflix tested. Valve: How I Got Here, What It’s Like, and What I’m Doing. It all started with Snow Crash. 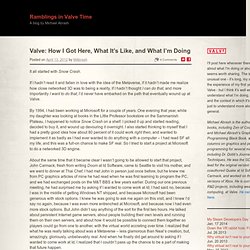 If I hadn’t read it and fallen in love with the idea of the Metaverse, if it hadn’t made me realize how close networked 3D was to being a reality, if I hadn’t thought I can do that, and more importantly I want to do that, I’d never have embarked on the path that eventually wound up at Valve. By 1994, I had been working at Microsoft for a couple of years.

One evening that year, while my daughter was looking at books in the Little Professor bookstore on the Sammamish Plateau, I happened to notice Snow Crash on a shelf. I picked it up and started reading, decided to buy it, and wound up devouring it overnight. Q&A: Card Hunter - launching an online game with a small team. When Jon Chey announced the formation of Blue Manchu in 2011, the Irrational Games co-founder said he wanted to spend time on more "genre, nichey games. " The studio's Card Hunter, released last month, is the manifestation of his efforts. It's a free-to-play, browser-based board and collectible card game, complete with dice rolls and a nerdy game master. That's a bit different from narrative-driven first-person shooter games like System Shock 2 and BioShock Chey worked on at Irrational.

Now that a couple of weeks have gone by, Chey tells us some lessons he and his small team has learned from Card Hunter's launch, and what he might've done differently. Online games are weird. We brought the game live fairly early in my day [Chey is in Australia], because I had to be around and watch what happened, to make sure nothing fell over. So I went for dinner and had a celebratory drink and went to bed.

How to Create an Asynchronous Multiplayer Game. There’s no doubting the fact that “asynchronous” multiplayer gameplay, or the ability to play games one turn per session over the course of several days, is the new hot trend in mobile gaming. 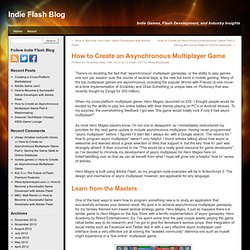 Many of the top multiplayer games are asynchronous, including the popular Words with Friends (a one-move-at-a-time implementation of Scrabble) and Draw Something (a unique take on Pictionary that was recently bought by Zynga for 200 million). When my cross-platform multiplayer game, Hero Mages, launched on iOS, I thought people would be excited by the ability to play live online battles with their friends playing on PC’s or Android devices. To my surprise, the overwhelming feedback I got was “this game would totally rock if only it had async multiplayer!”

As most Hero Mages players know, I’m not one to disappoint- so I immediately restructured my priorities for the next game update to include asynchronous multiplayer. Learn from the Masters Hero Academy Game Play Multiplayer game list in Hero Academy. Using Independent Teams to Scale: How Wooga Works. Jesper Richter-Reichhelm is Head of Engineering at social games company Wooga.

Here he gives an insight into the firm’s internal organization. At the end of last year, a document was published that described how Spotify works using a decentralized approach of tribes and squads. Since then, the article stuck with me. It made me realize we were not alone in this approach of fostering independent teams and with this article I want to contribute to the discussion and challenge a few conceptions. I also want to explain that it is possible to have a truly agile work environment based on small, autonomous teams. Wooga – now and then Wooga was founded 2009 with a vision that by 2020, everyone will be playing games. While that employee growth is a byproduct of economic success, in the process of growing it was a big challenge to not lose the company culture we had built. How did we hold onto that culture? Wooga is a collection of many small, independent teams. Teams Knowledge sharing Cooperation.