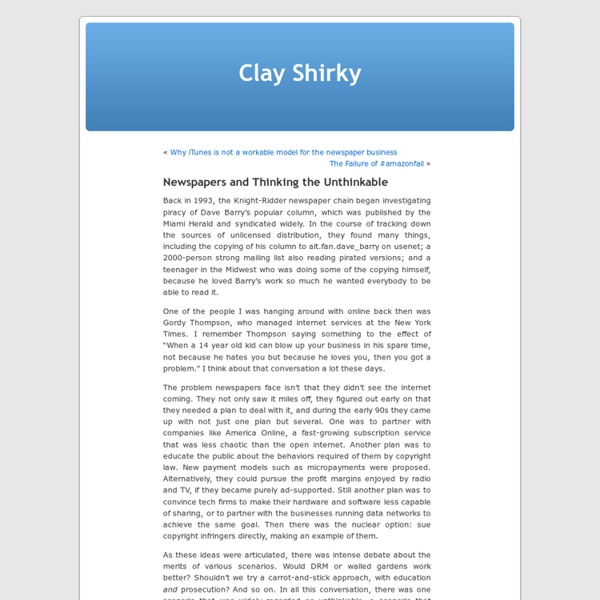 Back in 1993, the Knight-Ridder newspaper chain began investigating piracy of Dave Barry’s popular column, which was published by the Miami Herald and syndicated widely. In the course of tracking down the sources of unlicensed distribution, they found many things, including the copying of his column to alt.fan.dave_barry on usenet; a 2000-person strong mailing list also reading pirated versions; and a teenager in the Midwest who was doing some of the copying himself, because he loved Barry’s work so much he wanted everybody to be able to read it. One of the people I was hanging around with online back then was Gordy Thompson, who managed internet services at the New York Times. I remember Thompson saying something to the effect of “When a 14 year old kid can blow up your business in his spare time, not because he hates you but because he loves you, then you got a problem.” I think about that conversation a lot these days. Revolutions create a curious inversion of perception.

Why plagiarize when you can rip off a writer's thoughts? I could frame this piece about plagiarism by starting with a little verse about a renowned professor who won his fame by appropriating the work of another: Let no one else’s work evade your eyes Remember why the good Lord made your eyes So don’t shade your eyes But plagiarize, plagiarize, plagiarize… Only be sure always to call it please ‘research.’ I might credit the author of those lines, the satirist and folk singer Tom Lehrer, but you’d likely think me less clever for merely quoting someone when I could have used an idea of my own. Perhaps I should start off with what put plagiarism back in journalism’s center court—a series of allegations against prominent writers such as CNN’s Fareed Zakaria, The New Yorker’s Malcolm Gladwell, and BuzzFeed’s Benny Johnson.

Clay Shirky: Society doesn't need newspapers, it needs journalism This is an extract from Clay Shirky's article, Newspapers and Thinking the Unthinkable. The full essay can be read here. If you want to know why newspapers are in such trouble, the most salient fact is this: Printing presses are terrifically expensive to set up and to run. This bit of economics, normal since Gutenberg, limits competition while creating positive returns to scale for the press owner, a happy pair of economic effects that feed on each other.

Jay Rosen: Twilight for the Curmudgeons Neil Henry (ex-Washington Post, now at Berkeley J-School) wants reparations from Google for what it's done to news. I hope the San Francisco Chronicle keeps Neil Henry's essay--Google Owes Big Journalism Big Time--free and clear of any pay walls. Link rot must not be allowed to set in, for this is a document. Cheap, Easy Audio Transcription with Mechanical Turk After recording last week's interview, I was left with a 36-minute MP3 and a profound feeling of dread. You see, I hate transcribing audio. I used to transcribe interviews in high school, and it's always tedious, taking upwards of eight times the length of the clip itself.

newsmap Update: Jan 20, 2012 My appologies for not updating this site lately. Flipboard has been keeping me a little busy. I'll try to work something out here soon, but in the meantime, you might want to say hello on Twitter, browse through a few photos here or peek into what it is like designing Flipboard. Lines on Plagiarism Blur for Students in the Digital Age “Now we have a whole generation of students who’ve grown up with information that just seems to be hanging out there in cyberspace and doesn’t seem to have an author,” said Teresa Fishman, director of the Center for Academic Integrity at Clemson University. “It’s possible to believe this information is just out there for anyone to take.” Professors who have studied plagiarism do not try to excuse it — many are champions of academic honesty on their campuses — but rather try to understand why it is so widespread. In surveys from 2006 to 2010 by Donald L. McCabe, a co-founder of the Center for Academic Integrity and a business professor at Rutgers University, about 40 percent of 14,000 undergraduates admitted to copying a few sentences in written assignments.

Quote 5 Words From the Associated Press? That’ll Be $12.50 We've known that the Associated Press has some odd policies in regards to social media and the web for a while. The AP social media policy says that employees need to control not only what they said on Facebook, but what their friends said as well. We also got wind last week of the AP's plan to find where anyone uses AP material online in an attempt to stop what it considers unauthorized use of its content. To say it's causing controversy would be an understatement. Part of the AP's plan is to charge for use of its articles if you quote 5 words or more. They signed a deal with iCopyright in April last year to accomplish this goal. iCopyright is a widget that handles not only print and email, but republishing as well.

Technology is Great, but Are We Forgetting to Live? - ReadWriteW Imagine you're at a concert where your favorite band is playing for the last time. Or you're watching President Obama get sworn into office. Or maybe you're just sitting around with your family under the Christmas tree watching your children open gifts. What are you doing in all those scenarios? If you're like most people today, you're probably recording it with some sort of technological gadgetry, be it a smartphone, digital camera, or camcorder. You might also be sharing the moment with others across the web via Twitter, Facebook, or FriendFeed.

The high cost of not finding information By Susan Feldman On Sept 23, 1999, NASA's Mars Climate Orbiter spacecraft disappeared. The spacecraft had flown nine-and-a-half months and 416 million miles flawlessly. Scientists were stumped at first about what had gone wrong. They had checked and rechecked the calculations. It turned out that unbeknownst to the metric-based NASA, its contractor had submitted acceleration data in pounds of force instead of the metric equivalent, newtons. From 'why?' to 'why not?', the internet revolution The near future of the web is tied up with the logic of present media practice, and the logic of present media practice dates back to Gutenberg's invention of movable type in the mid-1400s. The problem Gutenberg introduced into intellectual life was abundance: once typesetting was perfected, a copy of a book could be created faster than it could be read. Figuring out which books were worth reading, and which weren't, became one of the defining problems of the literate. This abundance of new writing thus introduced a new risk as well: the risk of variable quality. A Bible was valuable, almost by definition. But a new work of fiction?