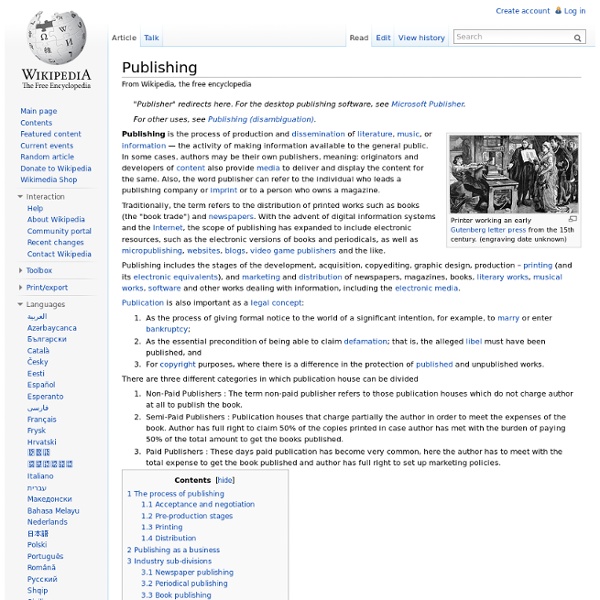 Traditionally, the term refers to the distribution of printed works such as books (the "book trade") and newspapers. With the advent of digital information systems and the Internet, the scope of publishing has expanded to include electronic resources, such as the electronic versions of books and periodicals, as well as micropublishing, websites, blogs, video game publishers and the like. Publication is also important as a legal concept: There are two categories of publisher: Non-Paid Publishers : The term non-paid publisher refers to those publication houses which do not charge author at all to publish the book.Paid Publishers : The author has to meet with the total expense to get the book published and author has full right to set up marketing policies. The process of publishing[edit] For works written independently of the publisher, writers often first submit a query letter or proposal directly to a literary agent or to a publisher. Acceptance and negotiation[edit] Editorial stage[edit]

Top Independent Book Distributors These are the most up-to-date addresses we have for independent bookstore distributors. If you find that any of these addresses are incorrect or you discover additional information (email, website, toll-free number, etc.), please email the author at JohnKremer@bookmarket.com. Do your due diligence before signing with any book distributor. Talk to their customers (both publishers and bookstores) to verify they'd be a good company for you to work with. Also, please alert us to any slow payments or other questionable distributor activity. Note: Most distributors listed below aren't likely to take on distribution of a single POD (printed-on-demand) book. APG Sales & Distribution, Van Hill, President, 7344 Cockrill Bend Boulevard, Nashville TN 37209; 615-254-2450; 800-327-5113; Fax: 800-510-3650. Atlas Books, 30 Amberwood Parkway, Ashland OH 44805; 419-281-5100; 800-537-6727; Fax: 419-989-4047. Comments: There have been a number of author grumblings about Atlas's fees and services. Paul & Co.

Choice Of Games Releases Interactive Fiction Apps For Kindle Independent developer Choice of Games announced the release of two text adventure games, Choice of the Dragon and Choice of Broadsides, on Amazon's Kindle platform. Though the Kindle platform is mostly regarded as a service for purchasing digital books, both indie developers and major publishers have started releasing games there in recent months. Three of the top ten bestsellers in the Kindle Store are currently games ported by Electronic Arts: Scrabble, Monopoly, and EA Solitaire. Choice of Games is taking a different approach from EA, releasing interactive fiction titles instead of board/card game adaptations. Choice of the Dragon is a Choose Your Own Adventure-style release in which players take on the role of a dragon, looting and pillaging, dominating their local kingdom, finding a mate, and fighting wizards. Choice of Games says it has more games on the way for the Kindle Store. "Our games are perfectly suited for Kindle," says Choice of Games co-founder Dan Fabulich.

About Us - Choice of Games Choice of Games LLC is a California limited-liability company dedicated to producing high-quality, text-based, multiple-choice games. We produce games in house, beginning with Choice of the Dragon and Choice of Broadsides. We have also developed a simple scripting language for writing text-based games, ChoiceScript, which we make available to others for use in their projects, and we host games produced by other designers using ChoiceScript on our website. Some of our games are available for free on the web. We also produce mobile versions of our games that can be played on iPhones, Android phones, and other mobile devices. We believe that text-based games are an underutilized format within modern computer games. If you are interested in developing games using ChoiceScript, we invite you to read our introductory guide to the ChoiceScript programming language. Please also feel free to contact us at support@choiceofgames.com. Next: Why Multiple-Choice Games? Press Info

Our Games Archive - Choice of Games Choice of the Rock Star Rock your way to the top of the ’80s charts in this epic interactive tale of music and mayhem! Will you achieve immortality or flame out on national TV? Reckless Space Pirates You have a choice: join a crew of space pirates to steal priceless slime from a nest of mushroom-like aliens–or hoodwink the pirates and team up with the mushroom colony to prevent an interstellar war! The ORPHEUS Ruse Infiltrate the enemy as a psychic spy, leaping from body to body by touch. Choice of the Ninja Assassinate the shogun, then vanish without a trace in this interactive fantasy novel! Treasure Seekers of Lady Luck Jump to hyperspace aboard the fastest starship in the galaxy! The Fleet Take back your home world from alien invaders! Choice of the Star Captain Fight on the front lines of the war between humanity and the hideous Blobs. Heroes Rise Choice of the Vampire Choice of the Dragon Play as a fire-breathing dragon who sleeps on gold and kidnaps princesses for fun. Slammed!

Customer Reviews: Inheritance 'Choose Your Own Adventure' Gets An iMakeover Wikifiction Wikifiction is a proposal to create a collaborative novel project. Unlike novels written by contributors writing sequentially, this project would involve the creation of novels in a Wiki-format project. The plot would unfold unpredictably, bringing exciting development to the story. See Also[edit] Wikithought[edit] Wiki for original creative content created by Wikipedians. Fiction[edit] Novels, playscripts, screenplays, poems, musical scores, etc... Types of fiction suited to wiki development[edit] There are several types of fiction especially suited to hypertext in general and wiki in particular: Decision novels, like the old Choose-Your-Own-Adventure series and its numerous imitations [1]. See [3] for more discussion of different kinds of nonlinear fiction. Perhaps it would make sense to explore one or both of these options in a small project at Wikicities and move to a dedicated domain if an increase in traffic warrants it. Fan Fiction[edit] Note: What is in it for wikipedia ? Other ideas.

Choose Your Own Adventure: Return to Atlantis App for the iPhone and iPod Touch Makers of fine products since 2007 Share with Anyone.CardMagnet lets you share your contact info with anyone - even if they don't have the CardMagnet app. Built for touch.No more getting papercuts from business cards Strangely Fun.Play with the interactive card - it's fun to tinker with with even if you don't like meeting new people! Spontaneously makes it easy to share your plans and invite friends to get together more often. By just spinning a few wheels, you can share your invitation with your favorite people, and they'll receive the invite even if they aren't a Spontaneously user. Streamlined InterfaceYou can track your habits and view your progress all from one screen thanks to an interface modelled after Apple's Weather and Stock apps Share with Friends, Not GroupsNot all your friends are necessarily friends with each other &mdash; rather than focus on a group interface, you can handpick which friends you want by tapping their faces. Nap TimerWant to grab a quick 20 minute nap?

More Choose Your Own Adventure On iPhone -- Courtesy Of Kindle Posted 11/21/2009 at 7:49am | by J.R. Bookwalter The classic Choose Your Own Adventure series already had a brief flirtation with the iPhone a year ago (courtesy of Magnetism Studios) with a 99¢ app featuring two books — Return to Atlantis and Journey Under the Sea. But now, you can collect nearly 30 more titles, courtesy of the free Amazon Kindle app. Timed with their 30th anniversary, parent company Chooseco, LLC recently inked a deal with Amazon to make their titles available on the Kindle, including the ever-popular The Abominable Snowman and Terror on the Titanic. The series, which has been helping kids read for three decades now, was launched in 1977 with R.A. This is an extra benefit to iPhone and iPod touch users, since the free Amazon Kindle app (and soon, a Mac version of the desktop software already available to Windows users) already opens up the e-book floodgate, negating the need to buy Amazon’s pricy hardware.

Choose Your Own Adventure: The Case Of The Patent Application 1) You are an employee of the United States Patent Office. Early one sunny morning you are asked to examine a patent claim from IBM. Its first claim reads: If you understand this, turn to 2. 2) You now have to consider if this sounds at all familiar. 3) Never mind. 4) A co-worker walks past your cubicle and notes that you are reading the Wikipedia page for Choose Your Own Adventure. 5) Seriously, you’ve not heard of Choose Your Own Adventure? 6) After examining the similarities between the book series and the IBM proposal, you conclude that there is a difference: IBM is proposing to have an audience vote on the decision, rather than it being down to a single reader or viewer. 7) Your coworker gleefully exclaims “Oh wow, you are going to LOVE this. 8) It appears that you have little reason to object to this patent. 9) You are correct in your suspicions. 11) You rubber stamp the approval. 12) Having researched the topic, you must now decide whether or not to approve the patent.