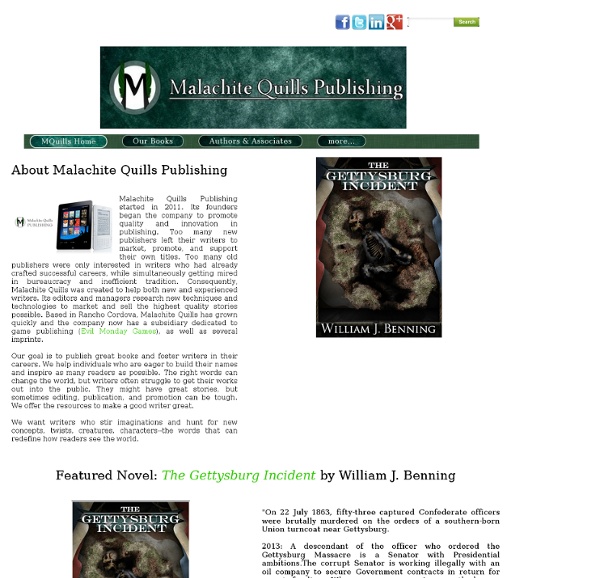 troubling.info Eight rules for writing fiction: 1. Use the time of a total stranger in such a way that he or she will not feel the time was wasted. Baen Books Science Fiction & Fantasy - Home Page Your Search for the Right Publisher Is Over Find Your Publisher (FYP); powered by Author Solutions, LLC. is a Web site dedicated to helping both first-time and experienced authors identify the most suitable publishing services provider for their book. With the information you provide about your book and goals, FYP makes a recommendation as to which book publisher has the best publishing package to help you reach your publishing objectives. Then on your behalf, FYP forwards the information you've provided to the publisher we recommended. They will then call you to discuss which publishing package is best for getting your book into the hands of readers. All fields are required fields.

Porter Anderson Writing on the Ether – Jane Friedman iStockphoto.com / Nikada The digital train has so left the station. That’s a Frankfurt railway stop, as a matter of fact. Fear and loathing, at home and abroad. International publishing-industry players met to hold meetings, attend conferences, drink heavily, and attend more conferences. They tweet-gasped at hotel wi-fi costing 19 euros per day and publishers warned of a digital “reckoning” headed toward them like the aforementioned train. Screenwriting.info: How to Write a Screenplay Why I Write This material remains under copyright and is reproduced by kind permission of the Orwell Estate and Penguin Books. From a very early age, perhaps the age of five or six, I knew that when I grew up I should be a writer. Between the ages of about seventeen and twenty-four I tried to abandon this idea, but I did so with the consciousness that I was outraging my true nature and that sooner or later I should have to settle down and write books. I was the middle child of three, but there was a gap of five years on either side, and I barely saw my father before I was eight.

The article and the future of print « BuzzMachine This week, Guardian Editor-in-Chief Alan Rusbridger declared that the paper would go “digital first,” following John Paton‘s lead and stopping a step short of his strategy at Journal Register: “digital first … print last.” My Guardian friends are getting a bit tetchy about folks trying to tell them how to fix the institution, but given that it lost £34.4m last year, I’d say the intervention is warranted and should be seen only as loving care: chicken soup for the strategy. So I will join in. Are book apps the next chapter for ebooks? Add to that the fact that an ereader can store hundreds of books and you have a gadget that can leave even the pickiest commuter or holidaymaker spoiled for choice. With ebooks now growing in popularity, publishers are beginning to think about enhancing ebooks and even recreating books as apps for tablet computers. Gareth Malone will be speaking at Hay about his new book, Music for the People: The Pleasures and Pitfalls of Classical Music.

Rapid Serial Visual Presentation Rapid serial visual presentation is an experimental model frequently used to examine the temporal characteristics of attention. The RSVP paradigm entails participants to look at a continuous presentation of visual items which is around 10 items per second. They are all shown in the same place. The targets are implanted inside this stream of continuous items. They are separate from the rest of the items and can be called distracters. Teaching Online Journalism » Timelines in journalism: A closer look You’re not going to create one every week, but a timeline is a useful — and helpful — type of information graphic, and fairly common in journalism. When teaching students about timelines, here are some ideas to consider and discuss: Chronology or timeline? Sometimes a timeline is not a timeline, according to Len de Groot, a longtime graphics journalist. A timeline shows actual spans of time, with proportional measurements for decades, years, days or hours, depending on the total time involved.

Shorter, And Sweeter It's quite amazing witnessing the rate of innovation in the publishing industry right now, much of it (it has to be said) coming from new entrants, challengers, entrepreneurs rather than incumbent organisations. Unlike many it seems, I don't subscribe to the view that the dawn of a disruptive new model or technology inevitably means the death in short measure of what was there before (what Simon Waldman called 'lazy endism'). Tim O'Reilly makes a similar point in this Forbes interview about how the interesting question about the impact of digital on publishing is not about it killing print, but rather to ask how it will change books. So the really interesting game is in the new and transformative - in doing stuff in genuinely new ways. The Daily for example, feels too close to the conception of a traditional newspaper, whereas FlipBoard combines professional and social curation to make for a genuinely transformative product.