39 Sites For Using iPads in the Classroom 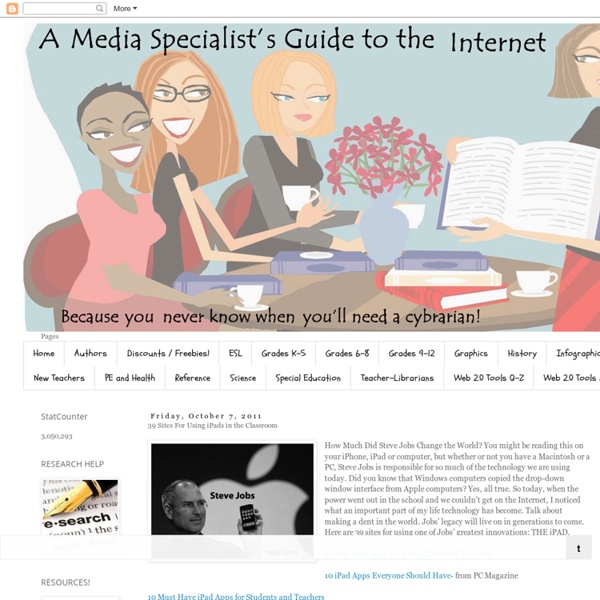 Pages Friday, October 7, 2011 39 Sites For Using iPads in the Classroom How Much Did Steve Jobs Change the World? You might be reading this on your iPhone, iPad or computer, but whether or not you have a Macintosh or a PC, Steve Jobs is responsible for so much of the technology we are using today. Did you know that Windows computers copied the drop-down window interface from Apple computers? 5 Great iPad Apps For Early Childhood Teachers10 iPad Apps Everyone Should Have- from PC Magazine10 Must Have iPad Apps for Students and Teachers10 Ways to Use iPads in Your Classroom40 iPad Apps Librarians Love40 Most Awesome iPad Apps for Science Students50+ iPad Apps By a Geography Teacher62 Interesting Ways to Use an iPad in the Classroom100 Incredibly Useful and Free iPad AppsBest Academic Reference Apps for the iPad- some $$, some freeA Day in the Life of the iPad ClassroomThe Debate Over iPads in EducationDigital Storytelling with the iPad ShareThisFacebookTweetLinkedInPinterestEmail 16 comments:

Top 20 Must-Have Educational iPhone & iPad Apps Used By Real Teachers in the Classroom - iPhone app article - Shara Karasic With the advent of the 2011/2012 school year, teachers who have access to mobile technology are scrambling to find the best education apps for the iPod Touch, iPad and iPhone. Educators use apps for everything from communicating with students to inspiring creativity to dissecting virtual frogs. Luckily, we have lots of educators (including Apple Distinguished Educators) on Appolicious who share their lists of the best education apps for elementary, middle school, junior high, and high school. These are the education apps most listed by educators on Appolicious.

The iPad Part 1 – some thoughts appertaining to its use in education The Apple iPad 2. I finally got my hands on one about a month ago and since then I’ve been playing, adding and removing apps, trialling them in the classroom environment and generally trying to see if and how I can use it effectively and not just as a replacement for my school PC for administration and showing Powerpoints. The priority for me was to think about how I might save time doing things such as making regular notes, assessment points or learning/ disciplinary incidents. To be able to jot a thought about Student X for his/her annual report/monthly chat would be useful as would the ability to quickly look up previous notes and grades or school policies about how to do things.

Therapy materials Translate this page into your language Powered by Translate a collection of resources by Judith Maginnis Kuster The following is one section of Judith Kuster's Net Connections for Communication Disorders and Sciences (www.communicationdisorders.com). Using cel.ly in the classroom or other ways I am new to the idea of allowing kids to use cell phones in school. I agree with it 100% if the purpose is valid and I have an administrator who has also indicated it is a good idea if it is monitored and used effectively in the classroom, but the question remains- how can it be used effectively? I attended a webinar recently on the website simplek12 and I learned som ideas about using phones in class- one website mentioned was cel.ly.

The Ultimate Guide To Using iPads In The Classroom How Students Benefit From Using Social Media 14.60K Views 0 Likes A lot of criticism has been leveled at social media and the effect it has on the way students process and retain information, as well as how distracting it can be. Science Education on the Edge · Why I abandoned my AppleTV for Airserver In which an Apple fan chooses a cheaper alternative for sharing iPad screens. Simply put, there are times that I need to show content-related stuff to my class so we can engage material as a group. Call it lecture, call it discussion, call it whatever you like.

Apple TV in the Classroom « PeorBust For the last 6 months I have been trialling the use of an iPad in school. I have tried as much as possible to do everything on the iPad from producing presentations, editing and uploading movies, emailing and browsing, video analysis, score keeping and even my registers. But the biggest change to my teaching was the introduction of an ATV unit into my classroom.

Top Alternative & Augmentative Communication iPad Apps The iPad continues to make communication more accessible and cost-effective for persons with developmental and speech disabilities. Mobile apps provide many of the vocabulary building and text-to-speech features of alternative and augmentative communication (AAC) devices for far less than products such as the Dynavox Maestro. The following apps help persons who struggle to speak due conditions such as autism, brain injuries, cerebral palsy, Down syndrome, and stroke. They provide ways to choose words, symbols, and images to express moods, needs, and thoughts. 7 Tech Tools for Collaboration Remember when collaborating with your colleagues was limited to early morning meetings or an epically long professional day? Now technology has given us the power to connect on our own time, in dynamic new ways and with teacher friends from around the world. Here are some of our favorite tools for learning from one another, sharing best practices and growing as an educator along the way.

Teacher’s Trial by Tech – Staff Engagement Success? There’s no doubt about it, the iPad is a desirable product. Now the new staff have one it is clear excitement and enthusiasm abound. Despite initial resistance and concern, staff have already asked for increased support and content.