The decline effect and the scientific method 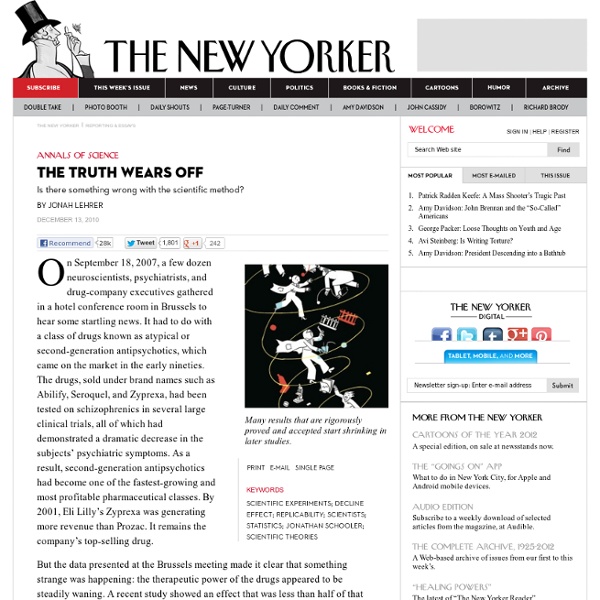 On September 18, 2007, a few dozen neuroscientists, psychiatrists, and drug-company executives gathered in a hotel conference room in Brussels to hear some startling news. It had to do with a class of drugs known as atypical or second-generation antipsychotics, which came on the market in the early nineties. The drugs, sold under brand names such as Abilify, Seroquel, and Zyprexa, had been tested on schizophrenics in several large clinical trials, all of which had demonstrated a dramatic decrease in the subjects’ psychiatric symptoms. As a result, second-generation antipsychotics had become one of the fastest-growing and most profitable pharmaceutical classes. By 2001, Eli Lilly’s Zyprexa was generating more revenue than Prozac. But the data presented at the Brussels meeting made it clear that something strange was happening: the therapeutic power of the drugs appeared to be steadily waning. Before the effectiveness of a drug can be confirmed, it must be tested and tested again.

ESE – Ethical Sensing Extratim Type Description The trademark quality of this type is a focus on socializing and guiding social situations and interactions so that the people involved can have fun and enjoy themselves. ESEs are typically in the middle of what is happening socially and know about the latest events and what people think and feel about them. They are skilled at bringing people together in fun and interesting ways and making everyone feel actively involved. In their pursuit of fun-oriented and stimulating social interactions, ESEs typically neglect to structure their own thought processes and views in a way that would help them know exactly what they think and why. Nearer, better Absence makes your heart grow fonder, but close quarters may boost your career. According to new research by scientists at Harvard Medical School, the physical proximity of researchers, especially between the first and last author on published papers, strongly correlates with the impact of their work. “Despite all of the profound advances in information technology, such as video conferencing, we found that physical proximity still matters for research productivity and impact,” says Isaac Kohane, the Lawrence J. Henderson Professor of Pediatrics at Children’s Hospital Boston and director of the Countway Library of Medicine at Harvard Medical School. The research was published in the Dec. 15 issue of PLoS ONE. Given that the Internet and social networks enable people to collaborate remotely, the researchers investigated whether proximity corresponded to the scientific impact of research as measured by citations of resulting publications. Digital drive

Atul Gawande: How Do Good Ideas Spread? Why do some innovations spread so swiftly and others so slowly? Consider the very different trajectories of surgical anesthesia and antiseptics, both of which were discovered in the nineteenth century. The first public demonstration of anesthesia was in 1846. The Boston surgeon Henry Jacob Bigelow was approached by a local dentist named William Morton, who insisted that he had found a gas that could render patients insensible to the pain of surgery. That was a dramatic claim. In those days, even a minor tooth extraction was excruciating. On October 16, 1846, at Massachusetts General Hospital, Morton administered his gas through an inhaler in the mouth of a young man undergoing the excision of a tumor in his jaw. Four weeks later, on November 18th, Bigelow published his report on the discovery of “insensibility produced by inhalation” in the Boston Medical and Surgical Journal. There were forces of resistance, to be sure. Sepsis—infection—was the other great scourge of surgery.

Liminality In anthropology, liminality (from the Latin word līmen, meaning "a threshold"[1]) is the quality of ambiguity or disorientation that occurs in the middle stage of rituals, when participants no longer hold their pre-ritual status but have not yet begun the transition to the status they will hold when the ritual is complete. During a ritual's liminal stage, participants "stand at the threshold" between their previous way of structuring their identity, time, or community, and a new way, which the ritual establishes. Rites of passage[edit] Arnold van Gennep[edit] Van Gennep, who invented the term liminality, published in 1908 his Rites de Passage, a work that is essential to the development of the concept of liminality in the context of rituals in small-scale societies. This three-fold structure, as established by van Gennep, is made up of the following components:[9] By constructing this three-part sequence, van Gennep identified a pattern he believed was inherent in all ritual passages.

Belief First published Mon Aug 14, 2006; substantive revision Sun Nov 21, 2010 Contemporary analytic philosophers of mind generally use the term “belief” to refer to the attitude we have, roughly, whenever we take something to be the case or regard it as true. To believe something, in this sense, needn't involve actively reflecting on it: Of the vast number of things ordinary adults believe, only a few can be at the fore of the mind at any single time. Nor does the term “belief”, in standard philosophical usage, imply any uncertainty or any extended reflection about the matter in question (as it sometimes does in ordinary English usage). Many of the things we believe, in the relevant sense, are quite mundane: that we have heads, that it's the 21st century, that a coffee mug is on the desk. Forming beliefs is thus one of the most basic and important features of the mind, and the concept of belief plays a crucial role in both philosophy of mind and epistemology. 1. 1.1 Representationalism 1.1.1.

Compilation of Duality Descriptions (V.Meged, A.Ovcharov.) Duality Descriptions (Meged & Ovcharov ) © From: V.Meged, A.Ovcharov. Learn To Manage People Efficiently, 2000. Notes: For duality descriptions by Gulenko do a search for "Gulenko duality". Related discussions and links Wikisocion - Duality Full Intertype Relations Chart Making Duality Work by V. "The Seeker" = ENTp = ILE (Ne-Ti) "The Mediator" = ISFp = SEI (Si-Fe) The Seeker is somewhat 'not here and now', he longs for far-reaching projects. The Seeker is critical towards everything created earlier. The Seeker gets mobilized in critical moments: bravely repulses the enemy, protecting both his own interests and those of others. The Mediator can take care of the health and comfort of others. Although The Mediator is ostentatiously optimistic, he is very much afraid of the future, as the source of uncertainty. Ingenuousness, impulse of life and feelings represent the 'visiting card' of this dual pair. "The Analyst" = INTj = LII (Ti-Ne) "The Bonvivant" = ESFj = ESE (Fe-Si)

News Desk: More Thoughts on the Decline Effect In “The Truth Wears Off,” I wanted to explore the human side of the scientific enterprise. My focus was on a troubling phenomenon often referred to as the “decline effect,” which is the tendency of many exciting scientific results to fade over time. This empirical hiccup afflicts fields from pharmacology to evolutionary biology to social psychology. There is no simple explanation for the decline effect, but the article explores several possibilities, from the publication biases of peer-reviewed journals to the “selective reporting” of scientists who sift through data. This week, the magazine published four very thoughtful letters in response to the piece. The first letter, like many of the e-mails, tweets, and comments I’ve received directly, argues that the decline effect is ultimately a minor worry, since “in the long run, science prevails over human bias.” That’s a pretty perfect example of selective reporting in science. But that’s not always the case. Illustration: Laurent Cilluffo

Gut feelings: the future of psychiatry may be inside your stomach Her parents were running out of hope. Their teenage daughter, Mary, had been diagnosed with a severe case of obsessive–compulsive disorder (OCD), as well as ADHD. They had dragged her to clinics around the country in an effort to thwart the scary, intrusive thoughts and the repetitive behaviors that Mary felt compelled to perform. Even a litany of psychotropic medications didn’t make much difference. It seemed like nothing could stop the relentless nature of Mary’s disorder. Their last hope for Mary was Boston-area psychiatrist James Greenblatt. Greenblatt started by posing the usual questions about Mary’s background, her childhood, and the onset of her illness. That’s what prompted Greenblatt to take a surprising approach: besides psychotherapy and medication, Greenblatt also prescribed Mary a twice-daily dose of probiotics, the array of helpful bacteria that lives in our gut. Her parents may have been stunned, but to Greenblatt, Mary’s case was an obvious one. Read next: Amar Toor

The Unity of Science First published Thu Aug 9, 2007; substantive revision Thu May 16, 2013 The topic of unity in the sciences includes the following questions: Is there one privileged, most basic kind of material, and if not, how are the different kinds of material in the universe related? Can the various natural sciences (physics, astronomy, chemistry, biology) be unified into a single overarching theory, and can theories within a single science (e.g., general relativity and quantum theory in physics) be unified? Does the unification of these parts of science involve only matters of fact or are matters of value involved as well? What about matters of method, material, institutional, ethical and other aspects of intellectual cooperation? These are the kinds of questions that will be addressed in this article. 1. 1.1 From Greek thought to Western science Unity has a history as well as a logic. 1.2 Rationalism and Enlightenment 1.3 German tradition since Kant 1.4 Unity and reductionism in logical empiricism