How to Publish on Smashwords 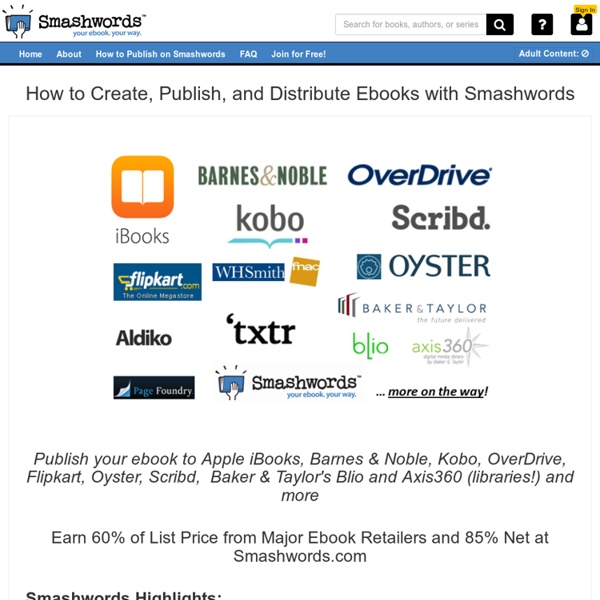 Publish your ebook to Apple iBooks, Barnes & Noble, Kobo, OverDrive, Flipkart, Oyster, Scribd, Baker & Taylor's Blio and Axis360 (libraries!) and more Earn 60% of List Price from Major Ebook Retailers and 85% Net at Smashwords.com Smashwords Highlights: We make ebook publishing fast, free and easy! World's largest indie ebook distributor Upload your book once and reach multiple retailers. Getting Started is as Easy as 1-2-3: Sign up for your free account. Access These Powerful Publishing Tools from the Smashwords Dashboard: Centralized Metadata Management - This is a huge time saver. Smashwords for Authors, Publishers and Literary Agents Smashwords is the world's largest, and the original, ebook distributor for indie authors. Don't hassle with direct uploads to retailers. Within minutes of uploading your book to Smashwords, it's featured for sale on the home page at the Smashwords store. From your Smashwords Dashboard, you control all aspects of your publishing. Literary Agents! 1. 2. 3. 4.

Podcast: Ebook Questions Answered With Joshua Tallent From EBookArchitects Ebooks are everywhere in 2010 and many people email me asking for more information on what they can do to jump on the wave of digital publishing. I just had to interview Joshua as he is an expert on the biggest platform out there, the Amazon Kindle. Joshua Tallent is the author of ‘Kindle Formatting” and is a specialist in formatting books for the Kindle and other ebook platforms. He is also the founder of EBookArchitects.com, converting print books into high quality formatted ebooks and taking the pain away from non-techy authors!

How to Add Finger-Swipe Support to Your Webpage One of the more interesting and fun aspects of iPad usage is the ability to effect change in a webpage by swiping a finger across the screen of the iPad. For example, swiping to the left to navigate to the next page in a series of pages, or swiping to display the next image in a series of images. For iPad users, these actions are intuitive and natural. However, for those who compose webpages, adding touch detection to a page can be a challenging and difficult process. No more. The information presented on these pages will make it easy to add touch sensing to your pages, requiring only a minimum of JavaScript coding on your part. How to Add Orientation Support to Webpages Creating and delivering content for the iPad One of the best aspects of iPad usage is the ability to view and interact with the device in a myriad of settings; sitting, standing, even while reclined on the sofa. Naturally this means that people will often adjust the orientation of the device to suit their needs. For example, an article that was begun to be read standing up with the iPad in portrait orientation could well be finished while sitting at a table, viewing the iPad rotated to landscape orientation.

Image Slideshows with CSS Transitions Creating and delivering content for the iPad An essential component of internet-based communications is the digital photograph. Nearly every website incorporates the use of images as a means conveying information and emotional messages. The adage by Fred R. iPhone, iOS 4, iPad SDK Development Tutorial and Programming Tips While the iPad and iPhone share iOS as their operating system there are many aspects of development for the iPad that are considerably different and should be understood by developers looking to create the best possible iPad apps. On this page I have decided to list tutorials specifically created for the iPad along with other resources such as user interface design tips, and graphical resources such as UI prototyping tools and vector kits. You can expect this page to update with new tutorials and resources so be sure to bookmark it.

Playing UX Matchmaker Creative designer-type seeks smart, open-minded entreprenuer. Must possess a respectable budget, a reasonable capacity to trust in the judgement of others, and also be willing to commit to a long-term relationship after one week of ‘discovery’—erm, dating. Serious offers only. Ahh, love. It appears in such varied forms, does it not? Maybe Ubuntu Enterprise Cloud Makes Cloud Computing Too Easy With just a few clicks you, too, can create a cloud computing environment. But if you’re like a lot of organizations, you may not know what to do with it after that. The latest version of Ubuntu Server (9.10) includes the Ubuntu Enterprise Cloud (UEC), which is actually powered by Eucalyptus. The ability to deploy a “cloud” on any server running Ubuntu is really quite amazing, especially given the compatibility of Eucalyptus with Amazon and the plethora of application images available for nearly immediate deployment. It supports both a public and private option, and a hybrid model, and comes replete with management tools designed to make building, deploying, and managing your own personal, private cloud a breeze.

CSS3 Flexible Box Layout Explained - Smashing Coding Advertisement The flexible box layout module — or “flexbox,” to use its popular nickname — is an interesting part of the W3C Working Draft. The flexbox specification is still a draft and subject to change, so keep your eyes on the W3C, but it is part of a new arsenal of properties that will revolutionize how we lay out pages. A new micro clearfix hack The clearfix hack is a popular way to contain floats without resorting to using presentational markup. This article presents an update to the clearfix method that further reduces the amount of CSS required. Demo: Micro clearfix hack Known support: Firefox 3.5+, Safari 4+, Chrome, Opera 9+, IE 6+