Gears: An Index of Songwriting Techniques 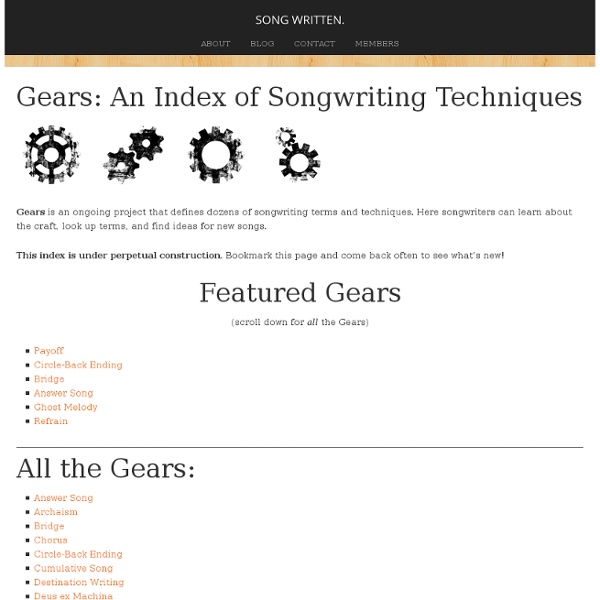 song written. finish the songs you start Gears: An Index of Songwriting Techniques Gears is an ongoing project that defines dozens of songwriting terms and techniques. Here songwriters can learn about the craft, look up terms, and find ideas for new songs. This index is under perpetual construction.

Know Every Note on the Guitar in 9 Days Knowing every note on the guitar is a challenge unique to the instrument. A saxophone has only one way to finger each note, while a guitar usually has a few different strings and four fingers to choose from. String a few notes together and the permutations of how to play them will wreck your brain. Pianists have a similar problem with ten available digits, but you can memorize the notes on a keyboard in a matter of minutes; the same pattern of white and black keys repeats every octave. The challenge with navigating the guitar fretboard is its two-dimensional layout. Random Rhythm Motif Generator Some ways you can use these rhythm patterns. 1) You can play around with these patterns by going to the online drum sequencer and enter the pattern into the app to sample the pattern. 2) Combine both patterns to make a new single pattern. 3) Augment the Values. Take these pattern and increase the note or rest value. Augment the time value by doubling the value.

Classical Guitar Sheet Music All this sheet music is for classical guitar. If it is in PDF format you must have the free Adobe Acrobat Reader installed on your computer to be able to open the documents. For any of the image files (GIF, JPG, BMP etc.), you can right click the picture of the music to save or print. (When saving or printing the file will not be as small as it is viewed in your browser.) If you have sheet music to request/share, or want to report a dead link to be fixed, please e-mail me.

Tron Legacy (2010) Year: 2010 Tron Legacy permalink I spent a half year writing software art to generate special effects for Tron Legacy, working at Digital Domain with Bradley "GMUNK" Munkowitz, Jake Sargeant, and David "dlew" Lewandowski. This page has taken a long time to be published because I've had to await clearance. Downhill Battle presents the Reasons Music diversity will grow. The major labels' business model requires them to have a steady stream of consistent products. The very nature of their operation produces homogenized music designed for specific radio formats and scientifically honed to hit-making models. Artists are signed and promoted based on the opinions of individual A&R executives, not the popularity of the music.