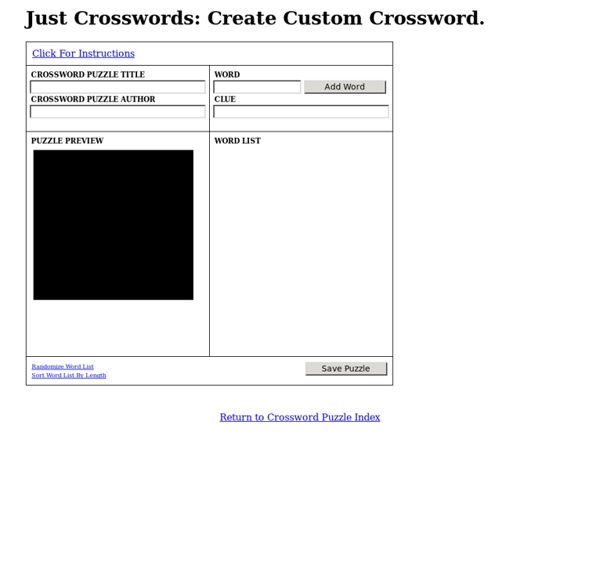 Larry Ferlazzo’s Websites of the Day… - The Best Sites For Making Crossword Puzzles & Hangman Games I’ve already posted a list of sites where both teachers and students can make more sophisticated online games that would be useful for language development — The Best Websites For Creating Online Learning Games. Today, I’d like to create another “The Best…” list, this time focusing on more simple and “old-fashioned” word games like crossword puzzles and hangman. I’ll share places where you can create these games for free and have them hosted online so anyone can play them at anytime and will also list sites that allow you to easily create the games, but for printing out hard copies only. Either way, the only way I think these activities provide occasional useful learning opportunities is when students create the games themselves. Here are my choices for The Best Sites For Making Crossword Puzzles & Hangman Games: Just Crosswords is an easy way to create an online crossword puzzle. You can create online hangman games (and do a lot more) at My Language Exchange. Related June 2, 2011

Prompts The Publication Coach » Beating writer's block, writing faster, writing tips, copywriters, communicators Reading time: Less than 1 minute Is it worth hiring a professional proofreader? Here's my view, if your publication is going to be printed... I'm a big believer in the value of professional proofreaders. If you're reluctant to spend the money on one (currently somewhere between $35 and $50 per hour), let me tell you about the value they add. Novel Writing Tips & Fundamentals – Storyfix.com Be an iPad Superstar: 8 Collections of iOS 5 Tips Just when I think I know a lot of about Apple's iOS, someone shows me a clever feature, setting, or shortcut I've never seen before. Since Apple doesn't include a printed manual, it's up to us as iPad, iPhone, and iPod touch users to find our own ways of learning these tips. I'd like to share eight links with tips to help us get the most of our iOS devices. The Always Current iOS 5 Tips and Tricks Guide from Mac|Life 50 Really Useful iPad Tips and Tricks from TechRadar 40+ Super Secret iPad Features and Shortcuts from AppStorm Keyboard Shortcuts to Speed Up Typing on an iPhone or iPad from Digital Inspiration The Complete List of iPad Tips, Tricks, and Tutorials from How-To Geek 10 Useful Apple iPad Tips and Tricks from Mashable iPad Tricks and Tips from Redlands College Fifty iOS 5 Tips in Five Minutes from CNET UK

Ctrl+Alt+Del The Adventures of Dr. McNinja Cracking Shakespeare's Catholic Code: An interview with Clare Asquith, by Debra Murphy [Editor's Note: Read Clare Asquith's article on the story behind Shadowplay, .] In recent decades the "personal is political" lit crit crowd has read William Shakespeare as everything from Transgressive and Queer to an apologist for Colonialism; from Puritan to Atheist, from regicide to monarchist, from philo-Semite to anti-Semite to Semite. Everyone, it seems, has joined in the "Shakespeare-and-us" game. But in spite of mounting evidence that Shakespeare was actually Catholic, or at least raised that way in a time when owning a rosary could land a subject of Queen Elizabeth in the Tower, few scholars have argued for a layer of dissident Catholic subtext in Shakespeare's staggering wealth of meaning. We recently spoke with Clare Asquith, author of the controversial new book Shadowplay: The Hidden Beliefs and Coded Politics of William Shakespeare, about her ground-breaking work, and the reaction to it here and in England. In America it's rather different. Yes, it has, hasn't it? Yes.

Comedity 2.0 The Quick 10: 10 Ways Shakespeare Changed Everything In honor of William Shakespeare’s birthday tomorrow, we’ve teamed up with Uncommon Goods to create a printable party kit to celebrate the Bard! (Oh, and we're reposting some of our favorite Shakespeare stories to get you in the mood.) The basic thesis of Stephen Marche’s How Shakespeare Changed Everything becomes obvious very early on (as in, it is expressed in the title). According to this fun, lyrically written and well-researched book, here are just ten of the many ways that Shakespeare changed everything: 1. Just say some words real quick and you’ll probably say one he coined – nearly 10% of his 20,000-word vocabulary was new to his audiences. 2. On November 25, 1864, actor John Wilkes Booth starred as Marc Antony alongside his brothers, Edwin as Brutus and Junius, Jr. as Cassius, in a one-night benefit performance of Julius Caesar at New York City’s Winter Garden Theatre — incidentally raising money to place a statue of Shakespeare on Central Park’s Literary Walk. 3. 4. 5. 6. 7. 8.