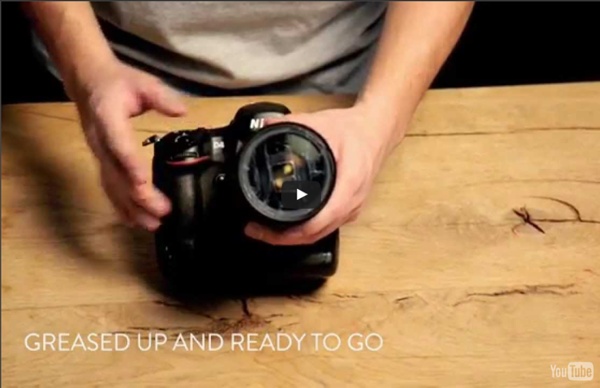 How to Pose so You Don't Look Fat in Photos Welcome to Time Out with Tanya, where I’ve put my fast paced graphic design career on hold in favor of adventures in motherhood. I’m capturing every moment on camera and you can come along, if you’d like. Sign up for my weekly email here so you’ll never miss a Time Out.

Ultraviolet Break of Day: A Midnight Walk Through the Neon-Hued Streets of Asian Cities by Marcus Wendt While on a recent trip through Hong Kong, Shenzhen, and Seoul, London-based photographer Marcus Wendt found himself suffering from a bout of jetlag induced insomnia and ended up wandering the streets of several cities late at night. With a camera in-hand he captured these mesmerising shots that channel the cyberpunk vibe of movies like Bladerunner where narrow urban alleys are bathed in cool ultraviolet light. Over several days Wendt worked his way through the Kowloon area of Hong Kong and then Shenzhen’s Huaqiangbei area known for its sprawling electronics market, before eventually traveling to Seoul. You can see more from the project on his website.

Photography: 15 Great Examples of the Rule of Thirds in Action The Rule of Thirds is a theory dictating how an image should be composed in order to create an aesthetically pleasing result. In all honesty, it’s more of a guideline than an actual rule. The principle involves splitting an image into nine equal parts.

Taking Care of People and Pictures in Hong Kong A stream of images from Hong Kong caught Rick Rocamora’s attention on Facebook: black and white street scenes, with dramatic light and compositions that ranged from kinetic to serene. The fact that the photographer, Xyza Cruz Bacani, was from the Philippines — like Mr. Rocamora — intrigued him, though he was reluctant to contact her. FIELD x Photography — Ultraviolet Break of Day Plunged into a foreign dark I found a new way of seeing, strange and alien. Synthetic light creeps into my eyes, the air thick with colours shifting and angles unbending. In the midst of the night a new day begins. Photography by Marcus Wendt in Shenzhen + Hong Kong, China, 2017. Seven Subjects You Shouldn’t Photograph Seven Subjects You Shouldn’t Photograph Photography (Or Should You?) Barbara Probst Exposure #86: N.Y.C., Central Park, Wollman Skating Rink, 03.01.11, 6:36 am, 2011, ultrachrome ink on cotton paper, diptych, each 96 × 53 cm.

24 Haunting & Abandoned Places That Will Give You Goose Bumps 50 Flares Twitter 21 Facebook 0 Google+ 4 Pin It Share 25 Email -- 50 Flares × They say that the only permanent thing in the world is change. History books are one way to understand the passage of time, but there are also some real-life monuments that speak of the past in their own ways. While some of these monuments are well taken care of and protected, those that are partially or even completely run-down often are the most interesting. Pentax K-S2 Review What is the Pentax K-S2? The Pentax K-S2 is an entry-level DSLR with plenty to prove. It’s hard to compete with Canon and Nikon in the DSLR game. Even Sony, which has produced some of our all-time favourites, struggles. Today’s contender is the Pentax K-S2. And while it sounds like a direct follow-on from the Pentax K-S1, this one takes a different approach.

Blog » 10 Best Type Foundries of 2013 As Google continues to strive towards world domination, they are dipping their digital fingers into everything, including fonts. The Google Fonts directory is served by other monolithic foundries such as Adobe and Monotype. With the vast majority of fonts coming from the minority of designers (#wearethe99percent), it’s almost too easy for the true heroes of typographical design to go uncelebrated. Here are 10 of our favourite designers through 2013 – check out their fonts and see what real talent can do.

12 Photography Websites That Will Inspire You Photography is, without a doubt, one of the most accessible creative disciplines one can pursue. While it may seem like all you really need is a camera to get started, it’s really the photographer’s eye and his ideas that truly make a great photo. For those of you looking to get inspired for your next photography session, I decided to compile a list of some of the best websites devoted to photography. The websites listed below feature some really great work by some of the best photographers in the world. Enjoy! And let us know about your favorite photography websites in the comments section below! Asia: 10 lessons learned with the heart of a photographer My mind races. It is five AM and I have not fallen asleep. I am awake after traveling from Bangkok to Tokyo, and from Tokyo to New York.

Famous Photogs Pose With Their Most Iconic Images Jeff Widener holds his photo of Tank Man in Tienanmen Square from 1989.Photo: Tim Mantoani Steve McCurry holds his 1984 photo of a young woman from Peshawar, Pakistan. "I looked for this girl for 17 years and finally found her in 2002. Her name is Sharbat Gula."Photo: Tim Mantoani Neil Leifer holds his photo, Ali vs. Liston, which he took on May 25, 1965 in Lewiston, Maine.Photo: Tim Mantoani Bill Eppridge stands with his photo of Robert F. Kennedy after his assassination on June 5, 1968.Photo: Tim Mantoani Elliot Erwitt: "The picture I am holding was snapped in 1974 just across the street from my apartment in New York's Central Park. 50 Award Winning Photographs top 10 lists picture pulitzer Ford Strikers Riot Photographer: Milton Brooks Year: 1942 Pulitzer Ford Strikers Riot was taken during the 1941 workers' strike at a Fordmanufacturing plant. The picture shows a worker beating a strikebreaker,who is trying to protect himself by pulling his coat over his head and face.Describing the circumstances surrounding the photo, Milton Brooks said, "Itook the picture quickly, hid the camera under my coat and ducked into thecrowd. A lot of people would have liked to wreck that picture."

20 Historic Black and White Photos Colorized One of the greatest facets of reddit are the thriving subreddits, niche communities of people who share a passion for a specific topic. One of the Sifter’s personal favourites is r/ColorizedHistory. The major contributors are a mix of professional and amateur colorizers that bring historic photos to life through color. All of them are highly skilled digital artists that use a combination of historical reference material and a natural eye for colour.