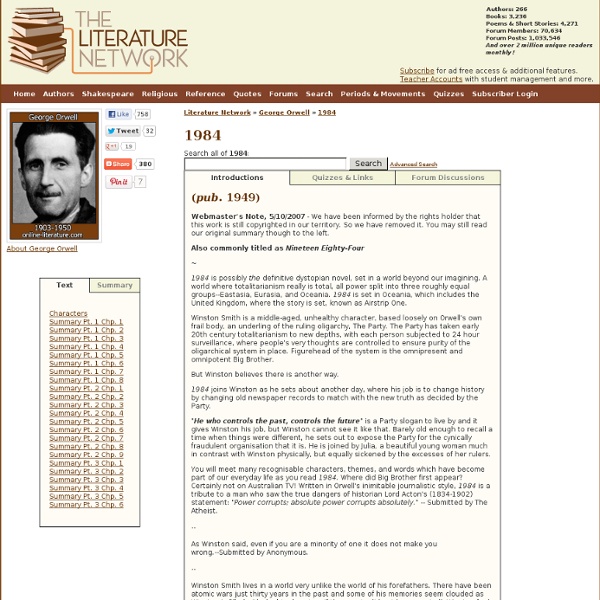 (pub. 1949) Webmaster's Note, 5/10/2007 - We have been informed by the rights holder that this work is still copyrighted in our territory. So we have removed it. You may still read our original summary though to the left. Also commonly titled as Nineteen Eighty-Four 1984 is possibly the definitive dystopian novel, set in a world beyond our imagining. Winston Smith is a middle-aged, unhealthy character, based loosely on Orwell's own frail body, an underling of the ruling oligarchy, The Party. But Winston believes there is another way. 1984 joins Winston as he sets about another day, where his job is to change history by changing old newspaper records to match with the new truth as decided by the Party. "He who controls the past, controls the future" is a Party slogan to live by and it gives Winston his job, but Winston cannot see it like that. You will meet many recognisable characters, themes, and words which have become part of our everyday life as you read 1984. Fan of this book?

Campaigning against camera surveillance in the UK & beyond » No CCTV I Have Seen The Future, And Its Sky Is Full Of Eyes Allow me just a little self-congratulatory chest-beating. Four years ago I started writing a near-fiction thriller about the risks of swarms of UAVs in the wrong hands. Everyone I talked to back then (including my agent, alas) thought the subject was implausible, even silly. Well, it’s not like I’m the next Vernor Vinge — it always seemed like a pretty blatantly obvious prediction to me — but I am pleased to see that drones and drone swarms have finally become the flavor of the month. In the last month, the Stanford Law Review has wrung its hands about the “ethical argument pressed in favor of drone warfare,” while anti-genocide activists have called for the use of “Drones for Human Rights” in Syria and other troubled nations; the UK and France declared a drone alliance; and a new US law compels the FAA to allow police and commercial drones in American airspace, which may lead to “routine aerial surveillance of American life.” Terrified yet? Image credit: Bee swarm, doubleagent, Flickr.

Look who's watching: it's not the FBI, it's Facebook Even the most sophisticated security agencies could not have dreamed up something like Facebook ... "Your friends have a lot in common with you, it’s your friends who betray you." Photo: Bloomberg The CV you'd rather the boss didn't see Stored inside a series of ordinary brick buildings beside a sprawling wasteland on the edge of San Francisco Bay are intimate details of your life, relationships and opinions. This information repository is not the headquarters of the FBI or CIA, but Facebook Inc, Mark Zuckerberg's multibillion-dollar social networking behemoth with access to more than 840 million people, and their data. While full-body scanners and CCTV cameras often evoke Big Brother fears, the growing trend in surveillance is much closer to home. Advertisement Social media has become the latest way governments, police and corporations spy on their citizens, most of whom have no idea they are being watched. But it is not just governments and security agencies spying on cyber space.

Facebook could face €100,000 fine for holding data that users have deleted | Technology Facebook could face a fine of up to €100,000 (£87,000) after an Austrian law student discovered the social networking site held 1,200 pages of personal data about him, much of which he had deleted. Max Schrems, 24, decided to ask Facebook for a copy of his data in June after attending a lecture by a Facebook executive while on an exchange programme at Santa Clara University in California. Schrems was shocked when he eventually received a CD from California containing messages and information he says he had deleted from his profile in the three years since he joined the site. After receiving the data, Schrems decided to log a list of 22 separate complaints with the Irish data protection commissioner, which next week is to carry out its first audit of Facebook. Among the 1,200 pages of data Schrems was sent were rejected friend requests, incidences where he "defriended" someone, as well as a log of all Facebook chats he had ever had.

Pentagon Wants a Social Media Propaganda Machine | Danger Room You don’t need to have 5,000 friends of Facebook to know that social media can have a notorious mix of rumor, gossip and just plain disinformation. The Pentagon is looking to build a tool to sniff out social media propaganda campaigns and spit some counter-spin right back at it. On Thursday, Defense Department extreme technology arm Darpa unveiled its Social Media in Strategic Communication (SMISC) program. This is more than just checking the trending topics on Twitter. Not all memes, of course. More specifically, SMISC needs to be able to seek out “persuasion campaign structures and influence operations” developing across the social sphere. Of course, SMISC won’t be content to just to hang back and monitor social media trends in strategic locations. Darpa’s announcement talks about using SMISC “the environment in which [the military] operates” and where it “conducts operations.” What exactly SMISC will look like it its final form is hard to say. Photo: USAF See Also: