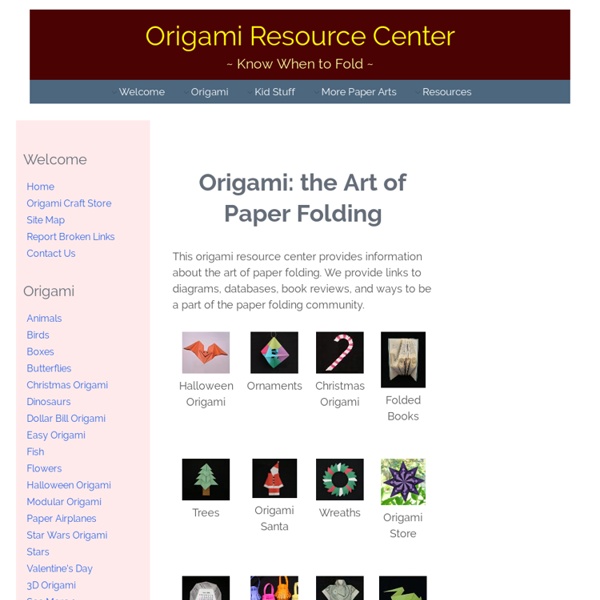 How to make gift bags from newspaper When I bought something at a store recently, the clerk handed me my purchase in a bag made from a newspaper. I liked it very much and had to make some more—thus today's DIY recycled newspaper project: gift bags made from the Wall Street Journal. You can vary the dimensions, of course, but here's what I used to create a bag that's 5" tall, 4.5" wide, and 3" deep. Stack two sheets of newspaper on top of each other. This will be a two-ply bag for extra sturdiness. The surprising things Seattle teachers won for students by striking Striking Seattle School District teachers and other educators walk a picket line Sept. 10 near Franklin High School in Seattle. (Ted S. Warren/AP) Seattle teachers went on strike for a week this month with a list of goals for a new contract.

KCP International The seaside has always had an allure for people with its rolling waves, sandy beaches, and countless interesting creatures. Many origami creators have been inspired to make designs that are reminiscent of the sea and its inhabitants. Here are three sea-inspired origami designs that are cute and easy to make: 3D Origami Swan This 3D origami swan was made with 400+ sheets of paper each folded into a small triangle. This type of paper folding is called Golden Venture Folding or Chinese Paper Folding. Note that there are 2 slits which are called "pockets". Units are connected by inserting the pointy parts into the pockets. There are 2 ways to position the triangular units. Position A: the triangle rests on the short edges of the triangle with the pockets still visible.

Paper flower tutorial I thought some of you would enjoy a quick tutorial on how to make those little paper flowers I used as part of my table setting a couple weeks ago. The credit for these go to Martha Stewart (I saw this idea nearly 10 years ago in her magazine, but haven't been able to find it on her website). So here I go.. Step 1: Draw a spiral on a 4x4" square sheet of paper Step 2: Cut out spiral along lines you have drawn

“What’s ‘Colorism’?” Illustration by Alex Eben Meyer When I began teaching in Boston, I was struck by how often students of color referred to each other as “light-skinned” or “dark-skinned.” Almost daily, I witnessed high school students identify, categorize and stereotype their peers based on skin tone. Star Books Tutorial Ya-hoo! Thanks for all the compliments and requests for a tutorial. YOU ALL ROCK! This is my first tutorial, so advance apologies for the wordiness and any confusion!

Origami Polyhedra - nuwen.net In all chaos there is a cosmos, in all disorder a secret order About this page: This page will detail how to make four different types of mathematical shapes by producing and assembling a number of tiny paper pieces. I did not invent the pieces or the method of making pieces; in fact, they seem to be called "Sonobes" (though I've always called them "pieces" and will do so here). Here is a rather detailed page that shows pieces that resemble mine.

Rewriting History—for the Better Illustration by Julie Flett It was pure coincidence that, during a recent trip to Northern California’s wine country, Kevin Gover, director of the Smithsonian’s National Museum of the American Indian in Washington, D.C., stumbled upon a perfect illustration of what’s wrong with history instruction in the United States. He and his wife were visiting an original Spanish mission at the same time as a group of fourth-graders. Gover watched as teachers and chaperones dressed as Franciscan friars led the children, who were dressed as Indians, through a series of quaint activities. “They were making candles. They were spinning wool, weaving baskets.

Kirigami is an art form where paper is folded & cut to create beautiful designs. Kirigami is similar to origami in that it is a form of paper art. The major difference is that in origami, you fold paper whereas in kirigami, you fold and cut paper. In the United States, the term "kirigami" was coined by Florence Temko. She used the word kirigami in the title of her book, Kirigami, the Creative Art of Papercutting, 1962. The book was so successful that the word kirigami was accepted as the name for the art of paper cutting.