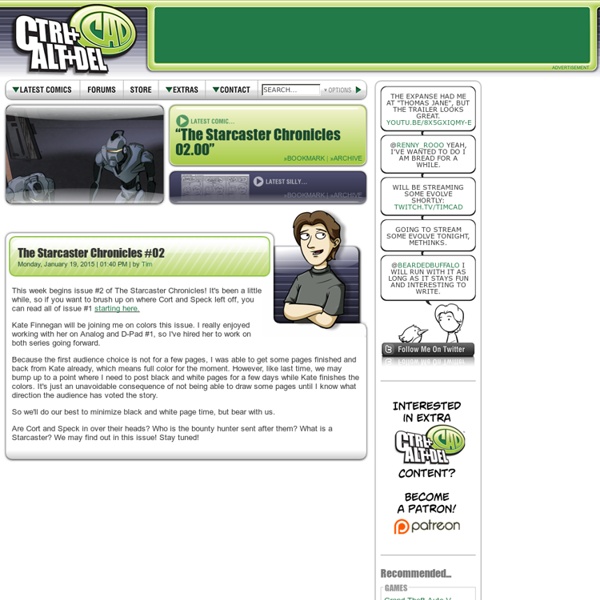 Cast your vote! Friday, April 18, 2014 | 12:37 AM | by Tim Choose what happens next: Try and steal a shipTry and get their ship back from Chaug Our first vote for this story is live. As promised, we're going to try using an embedded poll system... no more fiddling with emails and key phrases.

Cracking Shakespeare's Catholic Code: An interview with Clare Asquith, by Debra Murphy [Editor's Note: Read Clare Asquith's article on the story behind Shadowplay, .] In recent decades the "personal is political" lit crit crowd has read William Shakespeare as everything from Transgressive and Queer to an apologist for Colonialism; from Puritan to Atheist, from regicide to monarchist, from philo-Semite to anti-Semite to Semite. Everyone, it seems, has joined in the "Shakespeare-and-us" game. The Weblog Big Head Press - Thoughtful Stories, Graphic Novels Online And In Print - Escape From Terra - by Sandy Sandfort, Scott Bieser, and Lee Oaks Strip 994 - Click on page above to goto the next page. -- First Seen: 2012-07-07 Escape From Terra is updated with new pages every Monday through Friday. BHP At Porcfest XI! Come see Scott and Frank at PorcFest XI this summer!

Peter Newell&#039;s books Topsys and Turvys Topsys and Turvys 2 The Hole Book The Rocket Book The Slant Book The 20-Mule-Team Brigade Jungle-Jangle New! Almost a century after newspaper serialization: The Naps of Polly Sleepyhead Be an iPad Superstar: 8 Collections of iOS 5 Tips Just when I think I know a lot of about Apple's iOS, someone shows me a clever feature, setting, or shortcut I've never seen before. Since Apple doesn't include a printed manual, it's up to us as iPad, iPhone, and iPod touch users to find our own ways of learning these tips. I'd like to share eight links with tips to help us get the most of our iOS devices. The Always Current iOS 5 Tips and Tricks Guide from Mac|Life 50 Really Useful iPad Tips and Tricks from TechRadar 40+ Super Secret iPad Features and Shortcuts from AppStorm

Cats N' Cameras - Just when you thought it was safe to go to the photographer **Note to our Cameo guests, this strip was a bonus and does NOT count towards your cameo appearances** Hey Readers, Can’t help but thank you all enough for the fundraiser support as well as the cameo interest, thanks to all of you helping out I was able to order in Mackey’s new tablet a little in advance of the fundraiser completing it’s goals. So this weeks comic is brought to you in FULL COLOR !! Yay.. Jack Cole in Wikipedia Jack Ralph Cole (December 14, 1914 – August 13, 1958)[1] was an American cartoonist best known for creating the comedic superhero, Plastic Man, and his cartoons for Playboy magazine. He was posthumously inducted into the comic book industry's Jack Kirby Hall of Fame in 1991[2] and the Will Eisner Award Hall of Fame in 1999.[3] Police Comics No. 24 (Nov. 1943). Cover art by Jack Cole

The Publication Coach » Beating writer's block, writing faster, writing tips, copywriters, communicators Reading time: Less than 1 minute Is it worth hiring a professional proofreader? Here's my view, if your publication is going to be printed... I'm a big believer in the value of professional proofreaders. Wally Wood in Wikipedia EC publisher William Gaines once stated, "Wally may have been our most troubled artist... I'm not suggesting any connection, but he may have been our most brilliant".[2] He was the inaugural inductee into the comic book industry's Jack Kirby Hall of Fame in 1989, and was inducted into the Will Eisner Comic Book Hall of Fame in 1992. Biography[edit] Early life and career[edit]

The Quick 10: 10 Ways Shakespeare Changed Everything In honor of William Shakespeare’s birthday tomorrow, we’ve teamed up with Uncommon Goods to create a printable party kit to celebrate the Bard! (Oh, and we're reposting some of our favorite Shakespeare stories to get you in the mood.) The basic thesis of Stephen Marche’s How Shakespeare Changed Everything becomes obvious very early on (as in, it is expressed in the title). According to this fun, lyrically written and well-researched book, here are just ten of the many ways that Shakespeare changed everything:

For the Calvin Connoisseur Added a dinosaur painting from a Cleveland, OH hospital art college, over in the Rare Art section. Added a 2014 interview Bill Watterson gave with museum curator Jenny Robb, over in the Words section. Sadly, we lost the great artist Richard Thompson last week at the age of 58. I have added a 2013 interview Bill Watterson conducted with Thompson, over in the Words section. Top 99 Creative Writing Blogs Posted on Thursday February 5, 2009 by Staff Writers From poetry to lengthy prose, creative writing classes in an online English degree can be a great way to express yourself. Of course, even the best online college students and writers can use a few tips, a little inspiration and a whole lot of help getting their work out there. These blogs offer all of that and more. From blogs that focus on writers still trying to make it in the publishing world to those providing updates from best selling authors, you’ll find all kinds of information geared towards improving and informing your creative writing. Note: We’ve written an updated version of this list to give you the best, most current creative writing blogs.

Owen Fitzgerald and His Descendants You know, a funny thing about DC comics. Their "cartoony" artists are generally much better draftsmen than their "realistic" superhero artists. Owen Fitzgerald is kind of the father of the DC "funny human" comic lines. Owen was an animator and layout artist for many classic cartoons and drew comics on the side. He drew a beautiful comic series in the 40s called "Starlet O'Hara in Hollywood" and a few others before he started doing Hollywood star comics for DC.