What are the 21st-century skills every student needs? 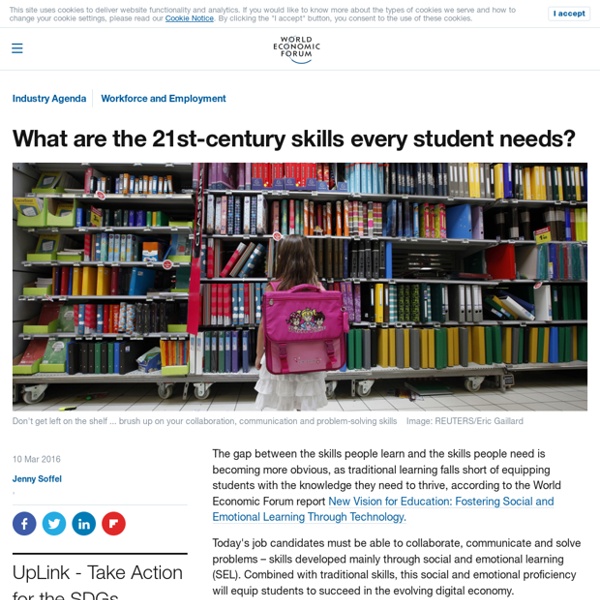 The gap between the skills people learn and the skills people need is becoming more obvious, as traditional learning falls short of equipping students with the knowledge they need to thrive, according to the World Economic Forum report New Vision for Education: Fostering Social and Emotional Learning Through Technology. Today's job candidates must be able to collaborate, communicate and solve problems – skills developed mainly through social and emotional learning (SEL). Combined with traditional skills, this social and emotional proficiency will equip students to succeed in the evolving digital economy. What skills will be needed most? An analysis of 213 studies showed that students who received SEL instruction had achievement scores that averaged 11 percentile points higher than those who did not. And SEL potentially leads to long-term benefits such as higher rates of employment and educational fulfillment.

From Written to Digital: The New Literacy Both the 21st-century economy and the careers needed to fuel it are changing at an unprecedented rate. Students must be prepared for nonlinear careers, pivoting to match the ever-changing work landscape. We thus need to rethink not just how we teach our students but what we teach our students. The people who were comfortable at this humanities-technology intersection helped to create the human-machine symbiosis that is at the core of this story. In his book about the history of the digital revolution, Walter Isaacson contends that the major innovations of the digital revolution—from the first general-purpose computer to the transistor to the iPhone—were all created by individuals who understood how to synthesize the humanities with technology. Yet even though there is much focus in higher education on how we teach using technology (e.g., e-texts, flipped classrooms, adaptive learning, personalized learning), what we teach about technology is just as important.

The Center for MichiganThe Detroit Historical Museum wants your story from the summer of ‘67 What were you doing during Detroit’s 1967 civil disorder? If you had a “significant, first-hand experience” with the uprisings in the last week in July that year, the Detroit Historical Museum wants to hear your story for an oral history project it’s conducting in the run-up to the riot’s 50th anniversary next summer. The Detroit museum will have interviewers on hand to record your recollections this Saturday, Aug. 20, between 10 a.m. and 3 p.m. The stories will become part of the museum’s “Detroit 67: Looking Back to Move Forward,” which seeks to assemble a record of what Detroiters and suburbanites were doing during one of the most momentous weeks in Detroit’s 315-year history. How much money teachers earn around the world How much do educators get paid for their work? We asked 16 public school teachers in communities around the world — from Kildare to Kathmandu, Johannesburg to Oslo — to tell us what they earned in one month (and how they spent it). Here’s what they said: Toronto, Canada Tell us about yourself: I’m 32 years old; I’m a middle school Special Education teacher working for the Toronto District School Board.

63 Things Every Student Should Know In A Digital World 63 Things Every Student Should Know In A Digital World by Terry Heick ed note: this has been updated from a previous post It could be argued—and probably argued well—that what a student fundamentally needs to know today isn’t much different than what Tom Sawyer or Joan of Arc or Alexander the Great needed to know. Communication. Resourcefulness. Jason Ohler : Education and Technology Part II. Emergence of new media literacies Every day media create every day literacy and fluency needs Students need to be able to write new media, and teachers need to be able to assess it. Internet Archive: About IA The Internet Archive, a 501(c)(3) non-profit, is building a digital library of Internet sites and other cultural artifacts in digital form. Like a paper library, we provide free access to researchers, historians, scholars, the print disabled, and the general public. Our mission is to provide Universal Access to All Knowledge.

Finland Will Become The First Country In The World To Get Rid Of All School Subjects Finland’s education system is considered one of the best in the world. In international ratings, it’s always in the top ten. However, the authorities there aren’t ready to rest on their laurels, and they’ve decided to carry through a real revolution in their school system.

The Entire BusyTeacher Library: 80 E-Books for Busy English Teachers – The Busy Teacher Store “ Wow! What a fantastic resource. I’m really so impressed both in terms of quantity and quality of materials and ideas. It certainly is an entire library. I don’t think I’ll ever need to buy another ELT book again. ”

What is digital fluency? Image by George Couros under CC A recent announcement from Hon. Hekia Parata signalled that digital fluency will be a key focus for Ministry centrally-funded professional learning support in 2016 (PLD Changes will lift student achievement, 23 Sept. 2015). *Examine What Makes a Literacy in the May/June Issue A few years ago, at an ALA Annual Conference, I found myself experiencing a very peculiar day. Besides my standard sessions on information literacy, I attended sessions on civic literacy and news literacy, as well. There were conversations in hallways about digital literacy, but also about disciplinary literacy and financial literacy.

Ossian Sweet defied segregation. Now his Detroit home will be a museum. The all-white jury couldn’t reach a verdict, and Frank Murphy, a future U.S. Supreme Court justice, declared a mistrial. After Henry Sweet was acquitted by another all-white jury, the charges against the rest were dismissed. ‘Transference of authority’ Baxter’s parents, William and Ruby, bought the house in 1958 for $15,000 after his mother recalled seeing it in a dream.