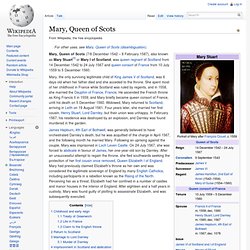 Mary, the only surviving legitimate child of King James V of Scotland, was 6 days old when her father died and she acceded to the throne. She spent most of her childhood in France while Scotland was ruled by regents, and in 1558, she married the Dauphin of France, Francis. He ascended the French throne as King Francis II in 1559, and Mary briefly became queen consort of France, until his death on 5 December 1560. Widowed, Mary returned to Scotland, arriving in Leith on 19 August 1561. Four years later, she married her first cousin, Henry Stuart, Lord Darnley, but their union was unhappy. Childhood and early reign[edit] Treaty of Greenwich[edit] Kings and Queens of Scotland - Mary, Queen of Scots. The tragic and tumultuous life of Mary, Queen of Scots began on the stormy night of 7th December, 1542. 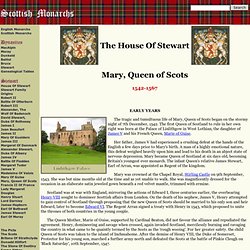 The first Queen of Scotland to rule in her own right was born at the Palace of Linlithgow in West Lothian, the daughter of James V and his French Queen, Marie of Guise. Her father, James V had experienced a crushing defeat at the hands of the English a few days prior to Mary's birth. A man of a highly emotional nature, this defeat weighed heavily upon him and lead to his death in an abject state of nervous depression. Mary Queen of Scots. The daughter of King James V and his second wife, Mary of Guise, was born at Linlithgow Palace on 8 December 1542. 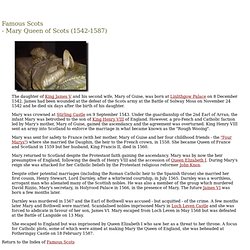 James had been wounded at the defeat of the Scots army at the Battle of Solway Moss on November 24 1542 and he died six days after the birth of his daughter. Mary was crowned at Stirling Castle on 9 September 1543. Under the guardianship of the 2nd Earl of Arran, the infant Mary was betrothed to the son of King Henry VIII of England. However, a pro-Fench and Catholic faction led by Mary's mother, Mary of Guise, gained the ascendancy and the agreement was overturned.

King Henry VIII sent an army into Scotland to enforce the marriage in what became known as the "Rough Wooing". Kings and Queens of Scotland - Mary, Queen of Scots. Mary, Queen of Scots On the night of 10th February,1566, Darnley, while recuperating from syphilis at a house at Kirk'o Field near Edinburgh, was murdered. 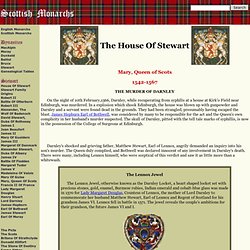 In a explosion which shook Edinburgh, the house was blown up with gunpowder and Darnley and a servant were found dead in the grounds. They had been strangled, presumably having escaped the blast. James Hepburn Earl of Bothwell, was considered by many to be responsible for the act and the Queen's own complicity in her husband's murder suspected. The skull of Darnley, pitted with the tell tale marks of syphillis, is now in the possession of the College of Surgeons at Edinburgh. Darnley's shocked and grieving father, Matthew Stewart, Earl of Lennox, angrily demanded an inquiry into his son's murder. The Lennox Jewel. Mary Queen of Scots. Mary Queen of Scots is one of the romantic and tragic figures in the rich history of Scotland. 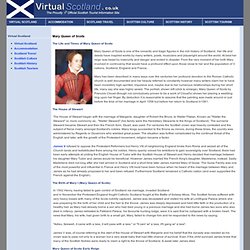 Her life and deeds have inspired works by many writers, poets, musicians and playwright around the world. At best her reign was beset by insecurity and danger and ended in disaster. From the very moment of her birth Mary involved in controversy that would have a profound effect upon those close to her and the population of 3 nations, Scotland, England and France. Family Tree for Mary, Queen of Scots at RoyaList. Mary, Queen of Scots is in a shaded box in the centre column : you may need to scroll down to see this, or just click here. To make efficient use of screen space, the family tree is presented vertically instead of in the normal horizontal format.

Marriage details are indicated by, for example, m.2 (1453), which indicates that this is the person's 2nd partner and the marriage took place in the year 1453. Click any name to re-draw the tree with that person at the centre. Exhibition reveals the real Mary, Queen of Scots - Heritage. Try this today. 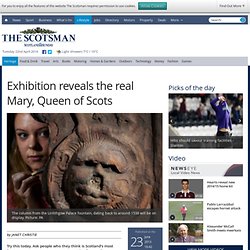 Ask people who they think is Scotland’s most famous woman. In response I got a couple of JK Rowlings, an Annie Lennox or two, even a Dolly the Sheep from Confused of Marchmont, but the vast majority of people immediately plump for Mary, Queen of Scots. Almost 500 years after her birth she still exerts huge fascination despite the fact her reign as queen in her own right only lasted from 1561 to 1567. Short-lived it may have been, but it was action-packed. Mary’s time on earth was crammed with romance, murder, mystery, betrayals, imprisonment and finally a beheading. Queen Mary. James V died in 1542 after the battle of Solway Moss. 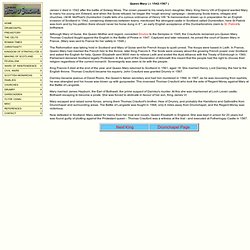 The crown passed to his newly-born daughter, Mary. King Henry VIII of England wanted Mary to marry his young son Edward, and when the Scots refused, he began the 'rough wooing' campaign - destroying Scots towns, villages and churches. I.M.M. McPhail's Dumbarton Castle tells of a curious ordinance of Henry VIII: "A memorandum drawn up in preparation for an English invasion of Scotland in 1542, containing distances between towns, mentioned 'the strongest castle in Scotland called Dumbretton; here St Patrick was born and by his petition there should never be horse dung in it' ", an early English acceptance of the Dunbartonshire claim to St. 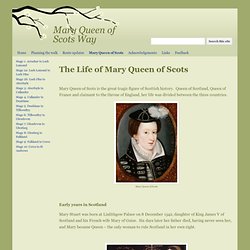 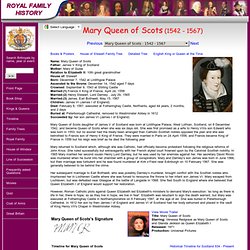 Mary STUART (Queen of Scotland) Mary Queen of Scots. Mary, Queen of Scots is perhaps the best known figure in Scotland's history. Her life provided tragedy and romance, more dramatic than any legend. She was born in 1542 a week before her father, King James V of Scotland, died. Mary was sent to France in 1548 to be the bride of the Dauphin, the young French prince, in order to secure a Catholic alliance against England. The Stewarts > Mary, Queen of Scots. Born at Linlithgow Palace, West Lothian on 8 December 1542, Mary became Queen of Scots when she was six days old. 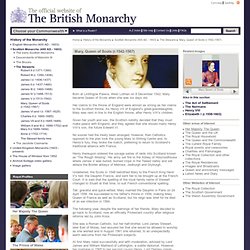 Her claims to the throne of England were almost as strong as her claims to the Scottish throne. As Henry VII of England's great-granddaughter, Mary was next in line to the English throne, after Henry VIII's children. Given her youth and sex, the Scottish nobility decided that they must make peace with England, and they agreed that she should marry Henry VIII's son, the future Edward VI. No sooner had the treaty been arranged, however, than Catholics opposed to the plan took the young Mary to Stirling Castle and, to Henry's fury, they broke the match, preferring to return to Scotland's traditional alliance with France. Henry thereupon ordered the savage series of raids into Scotland known as 'The Rough Wooing'. Mary, Queen of Scots (1542-1587) MARY QUEEN OF SCOTS, daughter of King James V of Scotland and his wife Mary of Lorraine (Mary of Guise), was born in December 1542, a few days before the death of her father, heart-broken by the disgrace of his arms at Solway Moss, where the disaffected nobles had declined to encounter an enemy of inferior force in the cause of a king whose systematic policy had been directed against the privileges of their order, and whose representative on the occasion was an unpopular favourite appointed general in defiance of their ill-will.

On the 9th of September following the ceremony of coronation was duly performed upon the infant. A scheme for her betrothal to Edward, Prince of Wales, was defeated by the grasping greed of his father [King Henry VIII], whose obvious ambition to annex the crown of Scotland at once to that of England aroused instantly the general suspicion and indignation of Scottish patriotism. Renaissance, Reformation and Mary Queen of Scots - Scotlands History.

Mary’s chief minister since Moray’s rebellion had been Rizzio, a common-looking Italian, of brains and accomplishments, but generally hated as a low-born foreigner and a court favorite. So a conspiracy was formed by the king and Moray and other Protestant leaders, they binding themselves to secure the crown to him and his heirs, and he agreeing to have them pardoned. Mary I of Scotland.