Be an iPad Superstar: 8 Collections of iOS 5 Tips 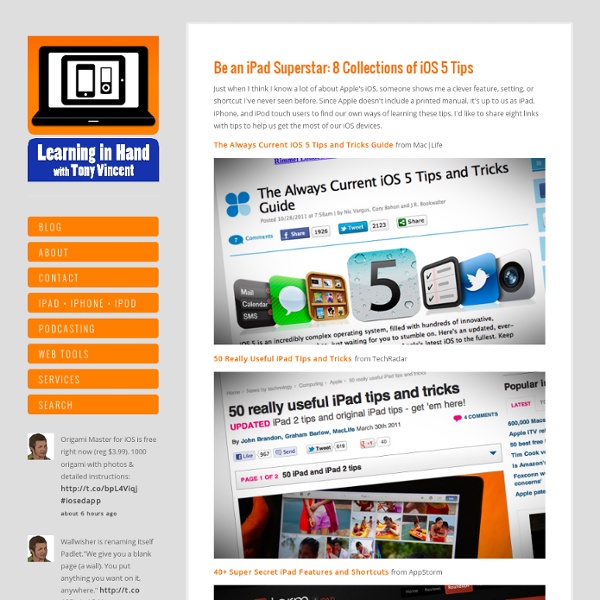 Just when I think I know a lot of about Apple's iOS, someone shows me a clever feature, setting, or shortcut I've never seen before. Since Apple doesn't include a printed manual, it's up to us as iPad, iPhone, and iPod touch users to find our own ways of learning these tips. I'd like to share eight links with tips to help us get the most of our iOS devices. The Always Current iOS 5 Tips and Tricks Guide from Mac|Life 50 Really Useful iPad Tips and Tricks from TechRadar 40+ Super Secret iPad Features and Shortcuts from AppStorm Keyboard Shortcuts to Speed Up Typing on an iPhone or iPad from Digital Inspiration The Complete List of iPad Tips, Tricks, and Tutorials from How-To Geek 10 Useful Apple iPad Tips and Tricks from Mashable iPad Tricks and Tips from Redlands College Fifty iOS 5 Tips in Five Minutes from CNET UK

The Publication Coach » Beating writer's block, writing faster, writing tips, copywriters, communicators Reading time: Less than 1 minute Is it worth hiring a professional proofreader? Here's my view, if your publication is going to be printed... I'm a big believer in the value of professional proofreaders. If you're reluctant to spend the money on one (currently somewhere between $35 and $50 per hour), let me tell you about the value they add. In addition to catching and fixing typos, they...

Find What App is Using Location Services & Draining Battery Life in iOS You can tell if Location Services is being used on an iPhone or iPad because a little purple arrow icon appears in the upper right corner of the menubar in iOS. If you’ve never paid attention to this before, it matters because when Location Services are being used it can drain your battery much faster than usual, this is because the app determining your location is constantly using network activity and GPS to pinpoint your coordinates and, usually, report it back to the apps servers. If you see that purple location services arrow pop up and you have no idea what app u Here is how to quickly determine which app is using Location Services, and potentially draining your iOS devices battery life: Open “Settings” and tap on “Location Services”Scroll through the app list until you see the app name with the purple arrow alongside it, it will be located next to the ON switchFlip this app to OFF if you want to disable location services for that app Nice tip idea from LifeHacker

Cracking Shakespeare's Catholic Code: An interview with Clare Asquith, by Debra Murphy [Editor's Note: Read Clare Asquith's article on the story behind Shadowplay, .] In recent decades the "personal is political" lit crit crowd has read William Shakespeare as everything from Transgressive and Queer to an apologist for Colonialism; from Puritan to Atheist, from regicide to monarchist, from philo-Semite to anti-Semite to Semite. Everyone, it seems, has joined in the "Shakespeare-and-us" game. But in spite of mounting evidence that Shakespeare was actually Catholic, or at least raised that way in a time when owning a rosary could land a subject of Queen Elizabeth in the Tower, few scholars have argued for a layer of dissident Catholic subtext in Shakespeare's staggering wealth of meaning. Until now.

A Friendly Guide to Deploying iPads at Your School For personal use, the iPad is a breeze to set up. Turn it on, connect to a wireless network, enter your Apple ID, and you’re ready to go. If you’re already a resident of the Apple ecosystem, your apps are waiting for you in on a “Purchased” list in the App Store and backups of your other devices are available via iCloud for download to your current device. If you’re a new convert, getting started and downloading apps is a relatively painless experience.

The Quick 10: 10 Ways Shakespeare Changed Everything In honor of William Shakespeare’s birthday tomorrow, we’ve teamed up with Uncommon Goods to create a printable party kit to celebrate the Bard! (Oh, and we're reposting some of our favorite Shakespeare stories to get you in the mood.) The basic thesis of Stephen Marche’s How Shakespeare Changed Everything becomes obvious very early on (as in, it is expressed in the title). According to this fun, lyrically written and well-researched book, here are just ten of the many ways that Shakespeare changed everything: 1. He gave us a lot of new words

Ridiculously awesome iPad tips and tricks Think you know your Apple tablet inside and out? Oh, sure, you're well aware of double-tapping the Home screen to see all open apps, enabling iCloud to wirelessly sync content between devices and how to group apps into folders -- but there is a lot more to your beloved 9.7-inch iPad (from $499). And so the following is a handful of lesser-known tips and tricks to getting the most out of your iPad.

Top 99 Creative Writing Blogs Posted on Thursday February 5, 2009 by Staff Writers From poetry to lengthy prose, creative writing classes in an online English degree can be a great way to express yourself. Of course, even the best online college students and writers can use a few tips, a little inspiration and a whole lot of help getting their work out there. These blogs offer all of that and more.

Tips And Tricks For Saving Battery Life On Your iPhone And iPad Good battery life is essential for a mobile device to succeed in the post-PC era, and Apple’s iOS devices continue to pack upgraded internals and improved battery technology into every product iteration. iPhone, iPad and iPod touch users can use a handful of tips and tricks for conserving precious battery on the go. Many of the tips are pretty basic, but every little bit counts when you’re trying to make it through the day on one charge. Here’s a roundup of tips and tricks for saving battery life on your favorite iOS device: 6 Ways To Reduce Neck Pain While Using An iPad Added by Jeff Dunn on 2012-10-15 Bending your neck to look at your tablet or computer screen is nothing new to teachers, students, admins, and pretty much everyone. But what about prolonged usage? It’s been hard to know until now. A study by the Harvard School of Public Health sheds some light on the right and wrong way you should be physically positioned during tablet use .

Myths about iOS, iPad, iPhone & iPod touch I have the pleasure of working with educators who get to use iPads and iPod touches with students. Wherever I facilitate workshops, I find there are some myths floating around about Apple's iOS devices, and I'd like to clear up some of the misinformation. iPad, iPhone, and iPod touch do not have user manuals. Gone are the days when you receive a thick printed user manual with your electronics purchase. Instead of an in-depth guide, Apple includes a glossy folded-up single sheet of paper called Finger Tips in the box. Some iPad Management Tips We have FINALLY gotten cases for our iPad 2s! Hooray! In honor of these new accessories, I wanted to share some quick iPad management tips with everyone: 1 - Color code your iPad cases for easy 1:1 access

iPad Tips for Teachers Using iBooks for Education I’ve been spending a lot of time in iBooks recently, and have showed teachers a whole slew of features that are new, or not as well known, in Apple’s default e-reader. So, without further ado, here are a few of my favorites tips for teachers using iBooks in education. 1. Find Free Books There are probably more free book titles in the iBooks Store than you might think, and they can be a great way to add to your classroom library without taking up any more valuable shelf space!

Force Quit Unresponsive iPhone And iPad Apps [How-To Advertisements The iPhone, iPod touch and iPad are fantastic and powerful devices. We get that, we really do. How to save, work with multiple apps and share iPad Published on December 17th, 2012 | by Mark Anderson One of the greatest positives of the iPad as a learning tool in education are the many different apps that allow students to create amazing pieces of work which demonstrate their learning. Not only that, but the productivity tools that go with their day to day activities are vast.