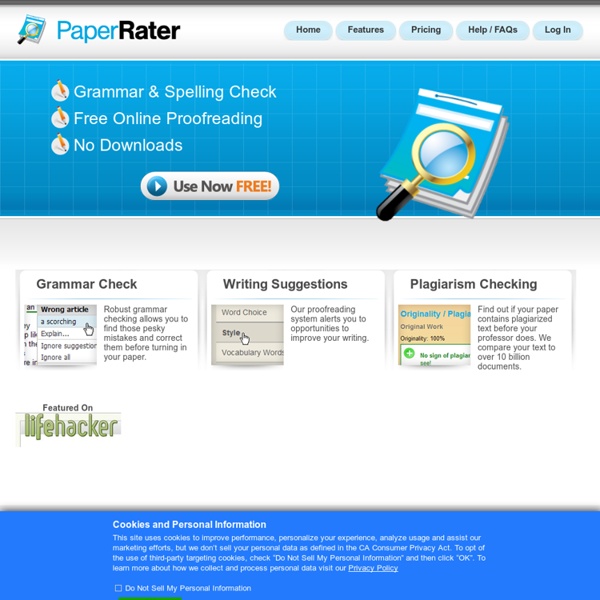 Top 99 Creative Writing Blogs Posted on Thursday February 5, 2009 by Staff Writers From poetry to lengthy prose, creative writing classes in an online English degree can be a great way to express yourself. Of course, even the best online college students and writers can use a few tips, a little inspiration and a whole lot of help getting their work out there. These blogs offer all of that and more. From blogs that focus on writers still trying to make it in the publishing world to those providing updates from best selling authors, you’ll find all kinds of information geared towards improving and informing your creative writing. Note: We’ve written an updated version of this list to give you the best, most current creative writing blogs.

List of Interactive Quizzes The quizzes with a magenta marble are also listed within the section or digital handout to which they apply. The twenty-one quizzes with a green marble 6 Free Sites for Creating Your Own Comics In the days of cold, hard newsprint, only people who could draw were successful comic strip authors. In some cases, this resulted in comic strips that had very nice pictures, but weren't all that funny (cough, Blondie). Thankfully, the Internet has taught us not to accept an inferior form of comic artistry, but a more flexible one. Comic strip enthusiasts who want funny but don't care about pretty drawing can have their strips, those who want artistry have theirs, and even those with very specific tastes can find something just right. The best part about these developments is that they allow you, regardless of any talent as an artist or comedian, to create your very own comic strip. Depending on what you're going for, you can use one of these six sites to help you do it.

The Best Sites That Show Statistics By Reducing The World & The U.S. To 100 People Reducing statistics to “if _________ were 100 people, then __________” can make them very accessible, engaging, and thought-provoking. For example, there’s the well-known “If Twitter Was 100 People” infographic. There are also several sites that use “gimmick” to illustrate much more important data about the world around us. HOW TO WRITE GOOD Caveat emptor. Carpe diem. O si villi, si ergo, fortibus es in ero.

The Quick 10: 10 Ways Shakespeare Changed Everything In honor of William Shakespeare’s birthday tomorrow, we’ve teamed up with Uncommon Goods to create a printable party kit to celebrate the Bard! (Oh, and we're reposting some of our favorite Shakespeare stories to get you in the mood.) The basic thesis of Stephen Marche’s How Shakespeare Changed Everything becomes obvious very early on (as in, it is expressed in the title). According to this fun, lyrically written and well-researched book, here are just ten of the many ways that Shakespeare changed everything:

30+ Mind Mapping Tools We all need to organize our thoughts sometimes, and there seems to be no better way to do it than in a visual fashion. We've got 30+ mind mapping tools to help you do just that. And since we know some of you are on a budget, we've got free and paid suggestions for you. Don’t forget to check out our post where you can suggest future toolbox topics! SAP - integrate Twitter in PPT Contents If you don’t find what you’re looking for, please add a comment below! PowerPoint Twitter Feedback Slide GRAMBO It is only a test Actually, it isn't even a test And it contains more than grammar Cracking Shakespeare's Catholic Code: An interview with Clare Asquith, by Debra Murphy [Editor's Note: Read Clare Asquith's article on the story behind Shadowplay, .] In recent decades the "personal is political" lit crit crowd has read William Shakespeare as everything from Transgressive and Queer to an apologist for Colonialism; from Puritan to Atheist, from regicide to monarchist, from philo-Semite to anti-Semite to Semite. Everyone, it seems, has joined in the "Shakespeare-and-us" game.

No, It’s Not Arbitrary and Does Make Sense: Teaching the English Punctuation System You might also try putting a period at the end of a “thought.” And what about semi-colons and colons? Well…maybe those are for exceptionally long breaths and thoughts? Okay, I guess you can see that these are no official “Strunk and White” rules about usage but rather the kind of myths about standard punctuation that are perpetuated, sometimes by educators, I’m afraid. Add to this the concern that writers, such as novelist and poets, often employ their own creative punctuation: for example, poet e.e. cummings wrote in all lower-case; popular novelist Stephen King, a former English teacher, writes long, run-on sentences to indicate stream-of-consciousness thought.