Gemological Institute Of America. Google News. Jewelry Design Professionals’ Network. Basket Setting - Holds a cluster of stones that may or may not surround a larger center stone. 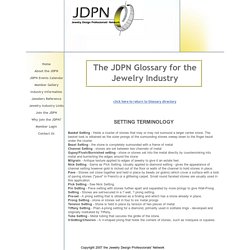 The basket look is obtained as the outer prongs of the surrounding stones sweep down to the finger bezel under the cluster. Bezel Setting - the stone is completely surrounded with a frame of metal Channel Setting - stones are set between two channels of metal Gypsy/Flush/Burnished setting - stone or stones set into the metal directly by countersinking into metal and burnishing the edges around the stone Milgrain - Antique texture applied to edges of jewelry to give it an estate feel. 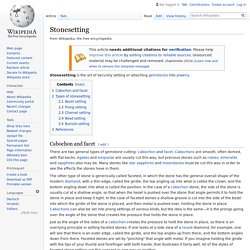 How to Choose the Right Setting for Your Diamond Ring. Whether choosing a new setting for a solitaire diamond, or choosing a ring based on the setting, buyers should most definitely consider what the diamond is placed in before making a purchase. 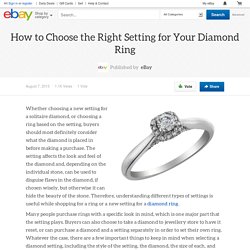 The setting affects the look and feel of the diamond and, depending on the individual stone, can be used to disguise flaws in the diamond, if chosen wisely, but otherwise it can hide the beauty of the stone. Therefore, understanding different types of settings is useful while shopping for a ring or a new setting for a diamond ring. Many people purchase rings with a specific look in mind, which is one major part that the setting plays. Buyers can also choose to take a diamond to jewellery store to have it reset, or can purchase a diamond and a setting separately in order to set their own ring.

Jewelry Design Guide. The carat is the unit of weight of a diamond. 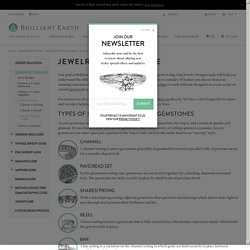 Carat is often confused with size even though it is actually a measure of weight. One carat equals 200 milligrams or 0.2 grams. Often diamond weight is declared in points. One carat is equal to 100 points. Gem Shapes & Cuts. Sometimes the shape and the cut of the stone is just as important as the the type of gem itself. 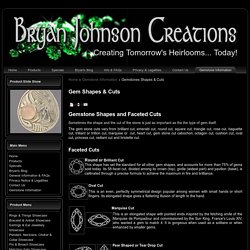 The gem stone cuts vary from brilliant cut, emerald cut, round cut, square cut, triangle cut, rose cut, baguette cut, trilliant or trillion cut, marquise or cut, heart cut, gem stone cut cabochon, octagon cut, cushion cut, oval cut, princess cut, radiant cut and briolette cut. Faceted Cuts Round or Brilliant Cut This shape has set the standard for all other gem shapes, and accounts for more than 75% of gems sold today. Its 58-facet cut, divided among its crown (top), girdle (widest part) and pavilion (base), is calibrated through a precise formula to achieve the maximum in fire and brilliance. Intarsia - definition in the mosaic glossary. Evaluation of brilliance, fire, and scintillation in round brilliant gemstones.

Gemstone Cabochon Information. A "cabochon" is described as gemstone that is not faceted, but is cut into a convex and usually highly polished shape. 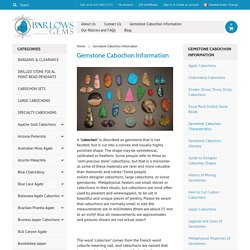 The shape may be symmetrical, calibrated or freeform. Some people refer to these as "semi-precious stone" cabochons, but that is a misnomer as some of these materials are rarer and more valuable than diamonds and rubies! Some people collect designer cabochons, large cabochons, or loose gemstones. Metaphysical healers use small stones or cabochons in their rituals, but cabochons are most often used by jewelers and wirewrappers, to be set in beautiful and unique pieces of jewelry. Please be aware that cabochons are normally small in size-the measurements are in millimeters (there are about 25 mm to an inch)! The word "cabochon" comes from the French word caboche meaning nail, and cabochons are named that because of their domed shape. "Gemstone" is not a scientific word, but rather a collective name for all ornamental stones.

How are Gems Cut and Polished? Not required for EPS2 students The process of cutting and polishing gems is called gemcutting or lapidary, while a person who cuts and polishes gems is called a gemcutter or a lapidary (sometimes lapidarist). 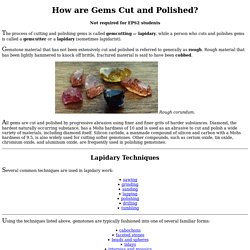 Gemstone material that has not been extensively cut and polished is referred to generally as rough. Rough material that has been lightly hammered to knock off brittle, fractured material is said to have been cobbed. Rough corundum. All gems are cut and polished by progressive abrasion using finer and finer grits of harder substances. Several common techniques are used in lapidary work: Using the techniques listed above, gemstones are typically fashioned into one of several familiar forms: Sawing Sawing a piece smoky quartz.

Why to buy custom furniture from a skilled furniture maker - CustomMade. ← back to Scholarship opportunities 2012 CustomMade scholarship recipient: Michelle KingLakeland College, Class of 2014 One of the most important benefits, I believe, when purchasing a high quality piece of custom jewelry made by a skilled jeweler is that they take the time to understand the consumer's needs and wants in customizing the perfect item. 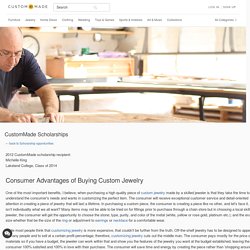 Glossary of Jewelry Terms. Since ancient times, gold has been prized for its beauty, and purity since it does not oxidize or tarnish like most other metals. 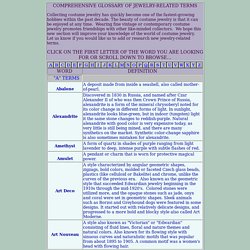 It has also been used as a store of value to build wealth and shield against hard times. Gold used in jewelry is almost always alloyed with other metals since gold in its pure form is very soft and malleable, and would not wear well by itself. Much gold jewelry from the 19th century and before is not marked. Tests must be done to determine if it is solid gold and to determine purity. The familiar Karat marking system used in the United States did not become popular until around 1890 or so. Other countries used a marking system well before the United States. It is also common in many European and other countries to mark gold with a three digit number indicating the parts per thousand of gold.

In addition to many purities, alloyed gold also comes in many colors. Guide to Gem Cutting Terms - International Gem Society IGS. By Donald Clark, CSM IMG Lapidary is the art of working in stone. 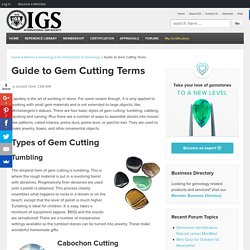 For some reason though, it is only applied to working with small gem materials and is not extended to large objects, like Michelangelo’s statues. Chillisauce News. Surveys Published on November 20th, 2014 | by Editor Will he or she say yes in 2015? As far as life-changing events go, getting engaged is right up there with the biggies With a new year on the horizon it’s a time when plenty of people are thinking about the biggest things in life.

And as far as life-changing events go, getting engaged is right up there with the biggies. We’ve decided to release the hidden secrets of proposals 7,000 people across the UK were surveyed Comprehensive data on proposals is not something that has been readily available to those that don’t work in the biz, but we’ve decided to change that by quizzing 7,000 people across the country. Ever wondered what the busiest month for popping the question is? Well we’ve found all of that out and more with our comprehensive proposal survey. What’s the best day of the year to propose?