"Tolkien opened up in me a dormant love of lost and misty times, myth and legend..." 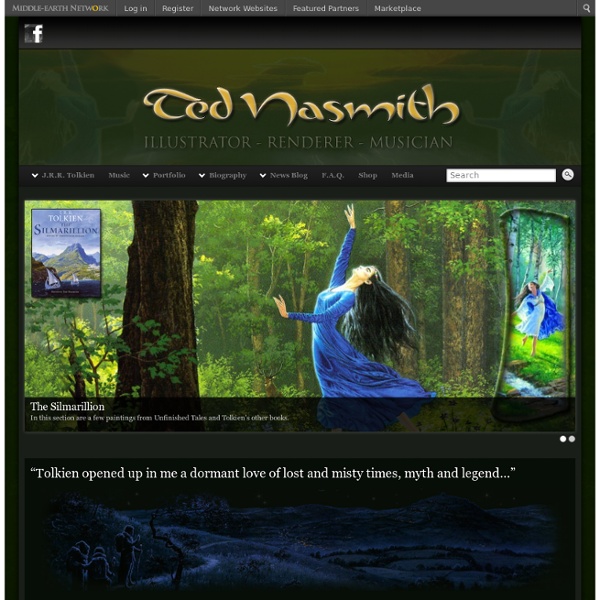 The World of Tolkien's Hobbit Since its first publication in 1937, J.R.R. Tolkien’s “The Hobbit” has been adapted into a 1970s cartoon, a Russian animated short and fan-fiction musicals and parodies. But no adaptation may more closely resemble Bilbo Baggins’ greatest adventure as Peter Jackson’s film “The Hobbit: An Unexpected Journey,” which premieres in U.S. theaters Friday. Jackson’s cinematic vision couldn’t have been conceived without the imagination of Tolkien, whose creation of intricate languages and dynamic characters are immortalized in the inimitable world of Middle Earth. Earlier this week, we talked to Jason Fisher, author of “Tolkien and the Study of his Sources,” about Tolkien’s ability to bridge mythology and language, and his constant revisions:

The Two Towers - A J. R. R. Tolkien Museum Trail Mount Doom by Alan Chapman The Two Towers is the second filmic instalment of J.R.R. Tolkien's fantasy book trilogy, The Lord of the Rings. In 2001 our first Tolkien Trail transported us on a perilous journey through Tolkien's Middle Earth. J.R.R. Tolkien - Tolkien Gateway John Ronald Reuel Tolkien, CBE (3 January, 1892 – 2 September, 1973), was a philologist and writer, best known as the author of The Hobbit and its sequel The Lord of the Rings. He worked as reader and professor in English language at the University of Leeds from 1920 to 1925; as professor of Anglo-Saxon language at the University of Oxford from 1925 to 1945; and of English language and literature from 1945 until his retirement in 1959. Tolkien was a close friend of C.S. Lewis, and a member of the Inklings, a literary discussion group to which both Lewis and Owen Barfield belonged.

Studies on the Works of J.R.R. Tolkien Despite not knowing much about the topic, I have sometimes ventured to write about Tolkien's invented languages and writing systems. A shorter collection of similar writings in Finnish can be found at Kirjoituksia Tolkienin kielistä ja kirjoitusjärjestelmistä. Contents The Tolkien Society The following is a non-exhaustive list of online resources related to Tolkien studies. We also provide links to other Tolkien or Tolkien-related societies from across the world as these organisations may be also be able to provide you with assistance. Tolkien Gateway – the world’s largest Tolkien encyclopaedia

University of Wisconsin Tolkien Society University of Wisconsin Tolkien Society Welcome to the web page of the University of Wisconsin Tolkien and Fantasy Society! Last modified: April 24, 2014 Who we are | Meeting schedule | How to join | For more information | Constitution | Links and items of interest Tolkien: Man Behind the Myth O n January 3, 2003, J. R. R. Tolkien would have celebrated his eleventy-first birthday, a most momentous occasion, the same birthday on which Bilbo departed the Shire for Rivendell. What would this venerable Oxford don have thought about his position in Western culture at the age of 111, almost a half-century after he initially published his trilogy? He would have seen reason enough for distress, chilling marks of the modern secular-scientific ideal. J.R.R. Tolkien and the OED By Peter Gilliver, OED Amid all the publicity surrounding this year’s release of the film of J. R. R.

'Exploring J.R.R. Tolkien's The Hobbit': A Reminder To Tolkien Fans Of Their First Love Seventy-five years ago, J.R.R Tolkien wrote a book for his children called The Hobbit. It isn't just a landmark piece of fantasy literature; it's a movement — a work that's inspired everyone from director Peter Jackson to the band Led Zeppelin to Leonard Nimoy (who recorded his own homage to the book in the late 1960s — "The Ballad of Bilbo Baggins"). Yet though it's widely celebrated, The Hobbit's always kind of existed in the shadow of Tolkien's other great work, The Lord of the Rings. Corey Olsen, self-described "Tolkien professor," tells Guy Raz, host of weekends on All Things Considered, that Tolkien fans tend to fall in love with The Hobbit as children, then move on to The Lord of the Rings and never come back. That's a great shame, Olsen says, so he's written his own book, Exploring J.R.R. Tolkien's The Hobbit.

'New' JRR Tolkien epic due out next year It's the story of a dark world, of knights and princesses, swords and sorcery, quests and betrayals, and it's from the pen of JRR Tolkien. But this is not Middle-earth, it's ancient Britain, and this previously unpublished work from the Lord of the Rings author stars not Aragorn, Gandalf and Frodo, but King Arthur. HarperCollins has announced the acquisition of Tolkien's never-before-published poem The Fall of Arthur, which will be released for the first time next May. Running to more than 200 pages, Tolkien's story was inspired by Geoffrey of Monmouth and Thomas Malory's tales of King Arthur, and is told in narrative verse. Set in the last days of Arthur's reign, the poem sees Tolkien tackling the old king's battle to save his country from Mordred the usurper, opening as Arthur and Gawain go to war.

Take the J.R.R. Tolkien quiz Now that Peter Jackson's first installment in his planned "Hobbit" trilogy - "The Hobbit: An Unexpected Journey" - has opened in theaters, it's time to test your knowledge about J.R.R. Tolkien's tale, and about the author himself. Fret not, the questions are multiple choice.