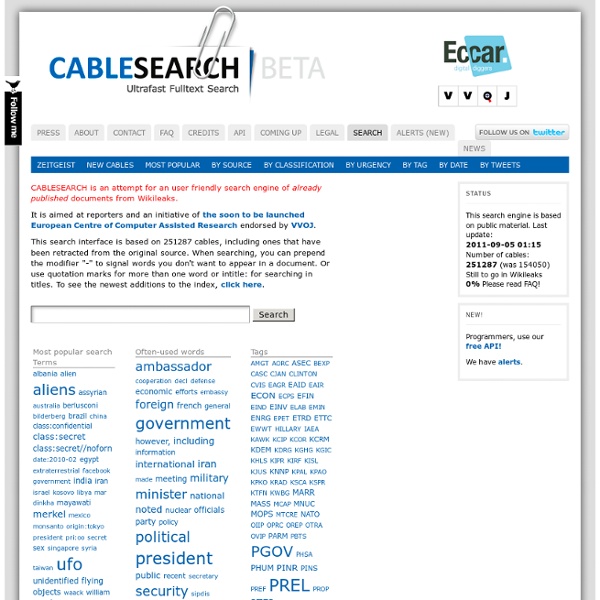 CABLESEARCH is an attempt for an user friendly search engine of documents from Wikileaks. It is aimed at reporters and an initiative of the soon to be launched European Centre of Computer Assisted Research endorsed by VVOJ . This search interface is based on 251287 cables, including ones that have been retracted from the original source. When searching, you can prepend the modifier "-" to signal words you don't want to appear in a document. Or use quotation marks for more than one word or intitle: for searching in titles. To see the newest additions to the index, click here .

WikiLeaks US embassy cables: live updates 7.52am: MasterCard, Visa, the Swedish prosecution authority, Joe Lieberman, Sarah Palin, PayPal, Twitter, PostFinance, Amazon and EveryDNS.net. It is an very eclectic mix, but their websites are all under attack, or threat of attack, by supporters of WikiLeaks. A full account of Operation Payback and its "major shitstorm" is available here. The Daily Mail is alarmed. Leaky World: a playable theory - Molleindustria Our Preface Julian Assange's short essay is an intriguing theory of conspiracy (as opposed to conspiracy theory) that effectively and concisely describes the drama of transnational power in the information age. It's an obscure, strategical text from 2006 that assumes a new relevance in the light of the massive leaks of 2010. However, we believe it has several flaws: 1) It is a byproduct of the leftist idea of class consciousness achieved via enlightenment. The Truth and the power of rational arguments are ultimately going to prevail, Social change can be achieved simply by revealing unjust structures to the ignorant masses.

A full-text visualization of the Iraq War Logs Update (Apr 2012): the exploratory work described in this post has since blossomed into the Overview Project, an open-source large document set visualization tool for investigative journalists and other curious people, and we’ve now completed several stories with this technique. If you’d like to apply this type of visualization to your own documents, give Overview a try! Last month, my colleague Julian Burgess and I took a shot a peering into the Iraq War Logs by visualizing them in bulk, as opposed to using keyword searches in an attempt to figure out which of the 391,832 SIGACT reports we should be reading. Other people have created visualizations of this unique document set, such as plots of the incident locations on a map of Iraq, and graphs of monthly casualties. We wanted to go a step further, by designing a visualization based on the the richest part of each report: the free text summary, where a real human describes what happened, in jargon-inflected English.

Wikileaks Afghan War Diary Mirror Ongoing non-secret discussion of information security, a/k/a information secrecy, a/k/a information perfidy (Cryptome was established to publish materials on this topic). Comments welcome: cryptome[at]earthlink.net. 7 August 2010. Mike sends: Just read your "advice" at the end of Your prose is sophomoric & unintelligible. What meds are you on? US diplomats spied on UN leadership Washington is running a secret intelligence campaign targeted at the leadership of the United Nations, including the secretary general, Ban Ki-moon and the permanent security council representatives from China, Russia, France and the UK. A classified directive which appears to blur the line between diplomacy and spying was issued to US diplomats under Hillary Clinton's name in July 2009, demanding forensic technical details about the communications systems used by top UN officials, including passwords and personal encryption keys used in private and commercial networks for official communications. It called for detailed biometric information "on key UN officials, to include undersecretaries, heads of specialised agencies and their chief advisers, top SYG [secretary general] aides, heads of peace operations and political field missions, including force commanders" as well as intelligence on Ban's "management and decision-making style and his influence on the secretariat".

appinions-offers-app-to-automatically-analyze-torrent-of-wikileaks-documents-111843559 Appinions is a new way of seeing the Web through the lens of people's opinions. Instead of reading countless pages of Web content delivered by conventional search tools, Appinions surfaces what really matters, the opinions key influencers are ... NEW YORK, Dec. 14, 2010 /PRNewswire/ -- Appinions Inc., a New York-based software company, is offering organizations access to its novel W3 application that automatically extracts who is saying what about whom in WikiLeaks documents.

Database: Search WikiLeaks cable data - World WikiLeaks has released the dates, sources and tags of more than 250,000 U.S. diplomatic cables. The website says it will release the complete text of all the cables, but it started with just about 200. You can browse the text of the released cables on the WikiLeaks "Cablegate" website. You can use the app below created by CBC News to search the dates and sources of all the cables. You can find cables within a certain date range, or originating from a particular embassy or consulate. WikiLeaks Cablegate LIVE Updates Share + According to a recently released cable, a facility in Yemen holding nuclear material was left unsecured after its one guard was removed and a security camera broke, according to the AP. The cable quoted one official as saying, "Very little now stands between the bad guys and Yemen's nuclear material." Assange was asked about the decision to release cables that identified sites vulnerable to terrorist attacks when Katie Couric interviewed him on Friday. Assange told her: We are an organization that attempts to promote human rights by revealing abuses that are concealed.

A must have if you intend to search for something particular in the Cablegate files. by alcide Dec 5