RFC Index. Document Retrieval » RFC Editor. In addition to searching, you can browse and download RFCs as follows. 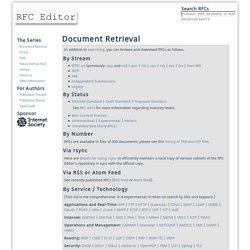 By Stream By Status By Number RFCs are available in files of 500 documents; please see this listing of TAR and ZIP files. Via rsync Here are details for using rsync to efficiently maintain a local copy of various subsets of the RFC Editor’s repository in sync with the official copy. Via RSS or Atom Feed See recently published RFCs (RSS feed or Atom feed). By Service / Technology [This list is not comprehensive. Applications and Real-Time: EPP | FTP | HTTP | iCalendar | IDNA | IMAP | LDAP | MIME | OAuth | POP3 | URN | vCard | XMPP | RTSP | RTP | SDP | SIP | VoIP.

Manpage.io. A star heading this way could knock millions of asteroids towards Earth. Researchers have known for a while that a star called Gliese 710 is headed straight for our Solar System, but they have now worked out precisely when it should arrive. 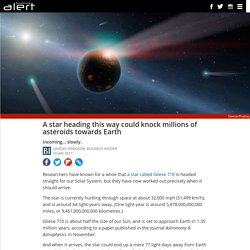 As far as we know, Gliese 710 isn't set to collide directly with Earth, but it will be passing through the Oort Cloud, a shell of trillions of icy objects at the furthest reaches of our Solar System. Human - Wikipedia. Humans (taxonomically Homo sapiens) are the only extant members of the subtribe Hominina. 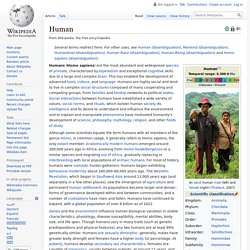 The Hominina are sister of the Chimpanzees with which they form the Hominini belonging to the family of great apes. They are characterized by erect posture and bipedal locomotion; high manual dexterity and heavy tool use compared to other animals; open-ended and complex language use compared to other animal communications; and a general trend toward larger, more complex brains and societies.[3][4] Early hominins—particularly the australopithecines, whose brains and anatomy are in many ways more similar to ancestral non-human apes—are less often referred to as "human" than hominins of the genus Homo.[5] Several of these hominins used fire, occupied much of Eurasia, and gave rise to anatomically modern Homo sapiens in Africa about 315,000[6] years ago.[7][8] They began to exhibit evidence of behavioral modernity around 50,000 years ago.

Etymology and definition History Evolution and range Biology Diet War. Is this Fundamental Phenomenon of the Universe an Illusion? - The Daily Galaxy. Could both gravity and the Big Bang be an illusion? 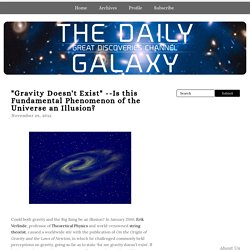 In January 2010, Erik Verlinde, professor of Theoretical Physics and world-renowned string theorist, caused a worldwide stir with the publication of On the Origin of Gravity and the Laws of Newton, in which he challenged commonly held perceptions on gravity, going so far as to state ‘for me gravity doesn’t exist’. If he is proved correct, the consequences for our understanding of the universe and its origins in a Big Bang will be far-reaching.

Verlinde, who received the Spinoza prize (the Dutch Nobel Prize) from the Netherlands Organisation for Science, is famous for developing this new theory, or idea, on gravity in which he says that gravity is an illusion. "Gravity is not an illusion in the sense that we know that things fall," says Verline. " Most people, certainly in physics, think we can describe gravity perfectly adequately using Einstein’s General Relativity. "We have other phenomena in Physics like this," Verlinde continued. The Clubhouse with Greg Fleet - 12 Jan, 2017. This January we're joined by the awesome Greg Fleet. 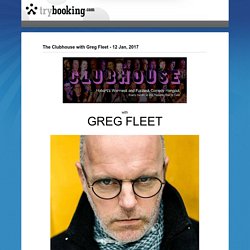