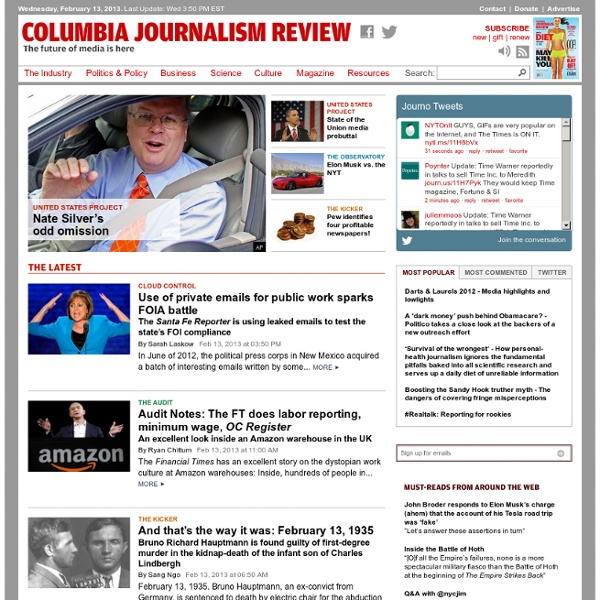 The NYT Needs to Learn the Value of the Link – GigaOM In the coverage of New York Times writer Zachary Kouwe, who resigned recently amid accusations of plagiarism, much has been said about the demands of writing for the always-on web, and how this might have contributed to Kouwe’s missteps -– something the writer himself referred to in a discussion of the incident as described by NYT public editor Clark Hoyt. But Reuters columnist Felix Salmon was the first to put his finger on what I think is the real culprit: a lack of respect for the culture of the web, specifically for the value and necessity of the link. Kouwe describes in an interview with the New York Observer how he felt under pressure to cover offbeat news items for the blog as they came up, and would pull together bits and pieces of coverage from elsewhere on a story and then rewrite them into his own post or story. This, he says, is how the plagiarism occurred: by not realizing which pieces of text he had pulled from somewhere else, and which he had written himself.

BuzzMachine SourceWatch Koch Spy Agency Led by Voter Fraud Huckster The Kochs have been complaining about a "lack of civility in politics" as they seek to boost their public image--but one of their top operatives helped propel perhaps the most egregious case of race-baiting voter fraud hucksterism in recent years. At the same time that the Kochs have been on a PR blitz, publicly spinning an image of themselves as well-intentioned patriots trying to make the world a better place and decrying "character assassination," they've been quietly ramping up a clandestine surveillance and intelligence gathering operation focused on their perceived political enemies, Ken Vogel reports at Politico. At the helm of this "competitive intelligence" operation is a man named Mike Roman, Vice President of Research for Kochs' Freedom Partners and who was paid $265,000 last year, according to Freedom Partners' recent tax filing. Kochs' Freedom Partners Spent $129M in 2014, Invested Massively in Voter Data Lists Rep. Ben Carson

Public Intelligence Blog Who will create the news experience? New technology spawns new ways to tell stories. That’s the exciting part of Apple’s new tablet, an old idea whose time has apparently come. Now comes the hard part: creating the content and designing the experience for the next wave of consumer devices that deliver our stories. We’re about to discover whether incumbent publishers and broadcasters can lead us into that world or whether a new, creative class of media designers and developers will replace them. What to put on the screens that we’ll hold in our hands, stuff in our pockets, and pack in our briefcases and backpacks? The New York Times has spent the past three weeks developing an app for the iPad hat allows readers to save stories, view photos and play video. into one,” said Times VP Martin Nisenholtz at today’s iPad unveiling. Three whole weeks developing an app. Wright is so wrong: most consumers of news and information online aren’t like him. This shapes up as another transformational moment for media. Stay tuned.

On The Media Misinformation: Why it sticks and how to fix it Childhood vaccines do not cause autism. Barack Obama was born in the United States. Global warming is confirmed by science. And yet, many people believe claims to the contrary. Why does that kind of misinformation stick? A new report published in Psychological Science in the Public Interest, a journal of the Association for Psychological Science, explores this phenomenon. The main reason that misinformation is sticky, according to the researchers, is that rejecting information actually requires cognitive effort. And when we do take the time to thoughtfully evaluate incoming information, there are only a few features that we are likely to pay attention to: Does the information fit with other things I believe in? Misinformation is especially sticky when it conforms to our preexisting political, religious, or social point of view. Even worse, efforts to retract misinformation often backfire, paradoxically amplifying the effect of the erroneous belief.

Why We’re Giving Away Our Reporting Recipe Over the past two years, ProPublica reporters Charles Ornstein and Tracy Weber have done a remarkable job of examining how states oversee misconduct by medical professionals [1] , chiefly nurses. Today, we are doing something relatively unusual for a news organization in the midst of a running story: We’re publishing the journalistic insights and techniques that have allowed us to do this reporting. Go to our reporting recipe [2] . ProPublica was created two years ago to pursue stories that would spur change. Now we are taking this principle a step further, giving away the recipe for what has been one of our most powerful reporting efforts to date. Reporting Network Want to be notified when we publish data and reporting tools? Nursing is regulated state by state, and we lack the resources to investigate 50 nursing boards or the agencies regulating a variety of other critical health professionals. We believe that healthy competition among proud journalists brings more news to light.