Socialising in pubs ‘boosts mens’ mental health’ MEN now have the perfect ­excuse to sneak off for a crafty pint with their mates – ­research has found that going down the pub can be good for their mental health. 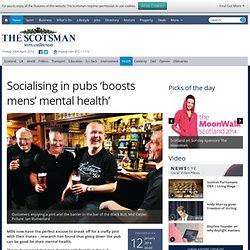 The study revealed that men drinking with friends in the pub reported positive effects on their mental wellbeing, allowing them to open up and talk about their emotions – traditionally a masculine ­taboo in Scotland. Sharing a round of drinks also helped them look out for each other and lift their spirits, according to research in the West of Scotland.

But the study also acknowledged the dangers that buying rounds encouraged men to perhaps drink more, with many of those questioned consuming harmful or hazardous amounts of alcohol. It is hoped the findings will help inform new approaches to reducing dangerous drinking levels, while understanding the more positive and sociable aspects of alcohol. Positive psychology. To Martin Seligman, psychology (particularly its positive branch) can investigate and promote realistic ways of fostering more joy in individuals and communities. 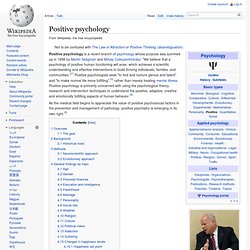 Positive psychology is a recent branch of psychology whose purpose was summed up in 1998 by Martin Seligman and Mihaly Csikszentmihalyi: "We believe that a psychology of positive human functioning will arise, which achieves a scientific understanding and effective interventions to build thriving individuals, families, and communities. "[1] Positive psychologists seek "to find and nurture genius and talent" and "to make normal life more fulfilling",[2] rather than merely treating mental illness. 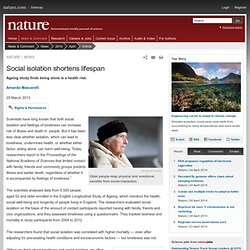 Scientists have long known that both social isolation and feelings of loneliness can increase risk of illness and death in people. But it has been less clear whether isolation, which can lead to loneliness, undermines health, or whether either factor, acting alone, can harm well-being. Facebook Makes People More Unhappy and Lonely, Study. Sep 14, 2013 08:07 AM EDT By Stephen Adkins, UniversityHerald Reporter Facebook, the social networking website was created to enhance global communication. 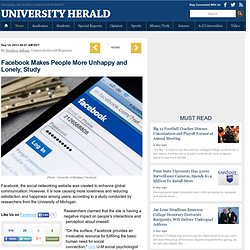 However, it is now causing more loneliness and reducing satisfaction and happiness among users, according to a study conducted by researchers from the University of Michigan. Like Us on Facebook Researchers claimed that the site is having a negative impact on people's interactions and perception about oneself. "On the surface, Facebook provides an invaluable resource for fulfilling the basic human need for social connection," said U-M social psychologist Ethan Kross, lead author of the article and a faculty associate at the U-M Institute for Social Research.

"This is a result of critical importance because it goes to the very heart of the influence that social networks may have on people's lives," said U-M cognitive neuroscientist John Jonides, another author of the paper. The findings appear online in PLOS ONE. How do you feel right now? Being Filthy Rich Doesn't Buy Happiness, But Raises Do. Folks who aren’t motivated by wealth will preach that money can’t buy happiness. 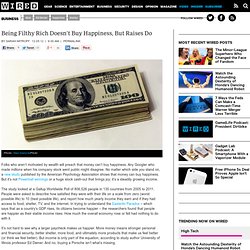 Any Googler who made millions when his company stock went public might disagree. No matter which side you stand on, a new study published by the American Psychology Association shows that money can buy happiness. But it’s not Powerball winnings or a huge stock cash-out that brings joy; it’s a steadily growing income. The study looked at a Gallup Worldwide Poll of 806,526 people in 135 countries from 2005 to 2011.

People were asked to describe how satisfied they were with their life on a scale from zero (worst possible life) to 10 (best possible life), and report how much yearly income they earn and if they had access to food, shelter, TV, and the internet. It’s not hard to see why a larger paycheck makes us happier. “We’ve found that rising income does lead to rising happiness, but it depends on people being optimistic, not having sky-high desires,” Diener says. The right kind of happy. Be happy: Your genes may thank you for it. A good state of mind — that is, your happiness — affects your genes, scientists say. 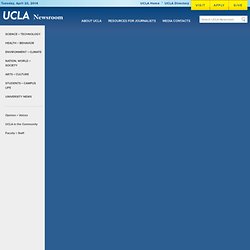 Using Money to Buy Happiness. We live in America with two bits of contradictory received wisdom — that you’d be a lot better off if you made more money, and that money can’t buy you happiness. 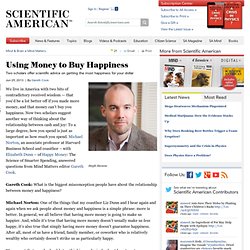 Now two scholars suggest another way of thinking about the relationship between cash and joy: To a large degree, how you spend is just as important as how much you spend. Happy Vs Meaningful Life. As psychologists zero in on the key to a good life, it's becoming clear that there are two distinct paths. 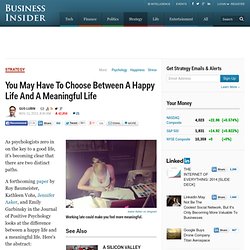 A forthcoming paper by Roy Baumeister, Kathleen Vohs, Jennifer Aaker, and Emily Garbinsky in the Journal of Positive Psychology looks at the difference between a happy life and a meaningful life. Here's the abstract: The puppy room – easing life's pain in a stroke. 'The idea of a puppy room on hand for stressful situations sounds Willy Wonka-like in its impossible perfection.' Photograph: Markus Schreiber/AP Pack your bags, everyone, we're moving to Canada. 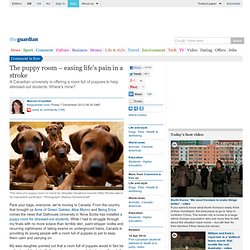 From the country that brought us Anne of Green Gables, Alice Munro and Being Erica comes the news that Dalhousie University in Nova Scotia has installed a puppy room for stressed-out students. Love letters and kindness may improve mental health. 22 March 2013Last updated at 21:11 ET By Lorna Stewart Health Check, BBC World Service "You matter to me. 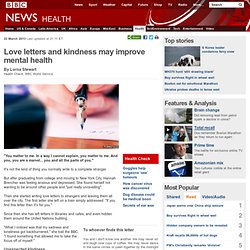 In a way I cannot explain, you matter to me.