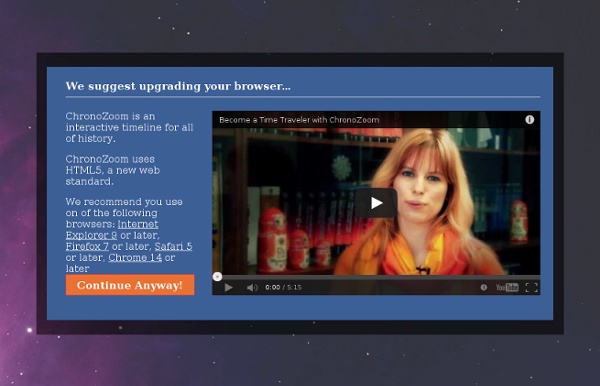 ChronoZoom is an educational tool for teachers and students who want to put historical events in perspective. A great many resources have been created already in ChronoZoom for your enjoyment and enlightenment. Start Exploring Use ChronoZoom to get a perspective of the extensive scale of time and historical events relative to what happened around the world. Become an author yourself! Simply log on with your social networking credentials to record your unique perspective or tell a story that needs to be told. New Teacher Resources RT @MSFTResearch: See how #Chronozoom helps students “think historically” & travel though time with 3 newly created curriculum modules http… #chronozoom is a valuable tool for illustrating Climate Change: @metanexus Anyone can author their small or Big History on the 14 Billion year timeline at - an open source project. @BillGates Congratulations to the Big History Project. RT @BillGates: Big History is my favorite course ever.

National Cold War Exhibition January 11 Jan - A ceasefire was announced in Greece between government forces and ELAS guerrillas; this agreement was confirmed by the government on 12 February. 4 Feb - Yalta Conference where Roosevelt, Churchill and Stalin meet to discuss terms of German surrender and the boundaries and governments in post war Eastern Europe.

Annenberg Media Exhibits: Collapse Hundreds of years ago in what is now modern Honduras, Copán was a thriving civilization, a center of the cultural life of the Maya. Tens of thousands of people made their home in the Copán Valley. Yet despite its importance, Copán went into decline. Across the vast territory of the ancient Maya, other important sites were sharing a similar fate. Classic Maya civilization was collapsing. Animation: Human Population Growth Over All of History Imagine that for every million people on Earth, there was a single dot on a map. In total, that would be about 7,600 dots – representing today’s global population of 7.6 billion. But, what if we went back in time, and watched those dots accumulate over human history? When and where do the first dots appear, and when does population growth ramp up to get to the billions of people that are alive today?

2012 Skywatching Events Guide & 2012 Venus Transit This story was updated on Jan. 2. As the year 2011 comes to a close, some might wonder what is looming sky-wise for 2012? What celestial events might we look forward to seeing? I've selected what I consider to be the top 12 "skylights" for this coming year, and list them here in chronological order. Not all these events will be visible from any one locality … for the eclipses, for instance, you'll probably have to do some traveling … but many can be observed from the comfort of your backyard. Hopefully your local weather will cooperate on most, if not all, of these dates.

The Lifespan of Ancient Civilizations Detailed in a Handy Infographic: Are We Headed Towards Our Own Collapse? Anyone living in the West today surely feels they've heard quite enough about its decline. (Unless, of course, they're fans of 1980s punk rock.) Given how long civilizations usually outlive individuals, how can an individual grasp the prospects for longevity of the civilization in which they find themselves? History, a discipline which has long had everything to do with charting the rise and fall of settlements, cultures, and empires, can provide the context necessary for understanding, but more of it has been written than even a human with the lifespan of a civilization can digest. Come to provide some clarity is Luke Kemp of Cambridge's Centre for the Study of Existential Risk, creator of the infographic above.

Magna Carta: Cornerstone of the U.S. Constitution At the death of his brother, Richard the Lionhearted, John assumed the throne of England, intent on exercising power to achieve his own selfish ends. To fund military campaigns in France, he extracted exorbitant fees from nobles, who, in turn, raised the rents imposed on their tenants. At the same time, John reduced the lords' customary powers over those tenants, restricting, for example, their power to hold court for those living on their feudal lands. Black History timeline Roman rule in Britain begins. The Numerus Maurorum Aurelianorum, an African auxiliary unit, takes its position on Hadrian’s Wall (c100-c400) as part of the Roman army and helps guard the outermost reaches of the empire. Kingdom of Ghana. stle Builder Image Copyright 1995 by Educational Management Group, Inc. During the Medieval era of history, life was lived by a very different set of political, economic, and social rules. The only form of government was a Monarchy where the king or queen ruled by "divine right." "Divine right" simply meant that God appointed the king or queen to rule with absolute power. The main economic system was Feudalism in which the king appointed a baron or knight to oversee a portion of his land in return for loyalty and protection in case of invasion. The baron or knight would oversee the serfs who labored on the land in return for protection given by the baron or knight.

Interactives Science/AAAS Subscribe Interactive Features Interactive versions of posters and illustrations from Science and other interactive environments from our companion sites. The Neandertal Genome A Medieval Mystery This lesson is suitable for KS3 History Unit 19: 'How and why did the Holocaust happen?' and could also be used to support Citizenship at KS3 Unit 4: 'Britain - a diverse society?'. The cartoon depicts the profoundly negative way in which Jews were viewed in 13th century England. Their situation did not improve. In 1290 King Edward I expelled every Jew from England, the first time this had happened anywhere in Europe.

Life In The 17th Century By Tim Lambert SOCIETY IN 17th CENTURY ENGLAND During the 17th century the population of England and Wales grew steadily.