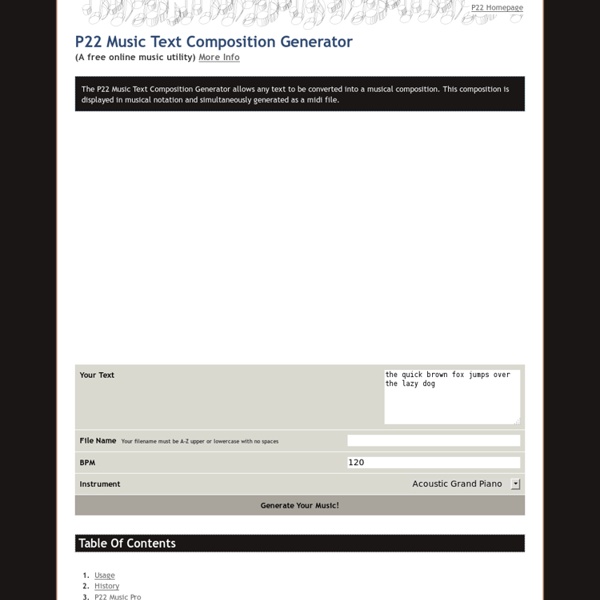 The P22 Music Text Composition Generator allows any text to be converted into a musical composition. This composition is displayed in musical notation and simultaneously generated as a midi file. 1. Usage Type or copy any text into the Text Field. Give the file a unique name. A short text may be best at a slow pace (IE 10 BPM) whereas a longer text may prove more engaging at 1200 BP. In some browsers (Safari 2 or greater), the ability to play real time multi-tracking can allow for complex compositions. The generated musical text does not claim copyright nor imply any rights from the text used. 2. The P22 Music Composition Font was proposed in 1997 to the John Cage Trust as an accompaniment to the John Cage text font based on the handwriting of the composer. 3. P22 Music Pro is a unique font system that expands on the concept used in the Music Text Composition Generator. The font used in the P22 MTCG is a basic version that closely follows the initial Cage inspired idea. 4.

Arduino 1.0 with enc28j60 Ethernet Shield V1.1 - trollmaker.com Arduino 1.0 with enc28j60 Ethernet Shield V1.1 18 december 2011 | Classified in: Electronic | Tags: arduino, ethernet, shield Here is how to use the enc28j60 Ethernet Shield V1.1 with Arduino 1.0. Over 5gb of Free Samples, Sounds and Loops Sharing is Caring Below you will find over 5000 free samples, sounds, loops and one shots. Subscribe to my blog for more music and graphic freebies in the future. These samples are supplied in labelled kits (with varying bpms), each of which contains bass, beat, synth, piano, jazz, dubstep, percussion, house, drum, hip hop, rock, etc., samples. As well as loops, some of the kits also contain hits and multisamples. Most of these samples are supplied as 24-bit WAV files and can be imported directly into your DAW(digital audio workstation) or sampler of choice.

Sivananda: The Value of Semen My dear brothers! The vital energy, the Virya [strength; power; energy; courage] that supports your life, which is the Prana of Pranas, which shines in your sparkling eyes, which beams in your shining cheeks, is a great treasure for you. Remember this point well. Virya is the quintessence of blood. 5 Creative Coaching Techniques To Get Yourself Unstuck If you ever feel stuck on a problem or overwhelmed by the challenges you face, here are five powerful tools that can help you get unstuck fast. I’ve tried and tested them with hundreds of coaching clients over the past 15 years, so I can confidently recommend using them when you’re facing a problem or adversity, and you need to draw on your reserves of creativity and courage to overcome it. 1.

Street Ghosts project - Google Street View made Street Art and Public Concern In this project, I exposed the specters of Google’s eternal realm of private, misappropriated data: the bodies of people captured by Google’s Street View cameras, whose ghostly, virtual presence I marked in Street Art fashion at the precise spot in the real world where they were photographed. Street Ghosts hit some of the most important international Street Art “halls of fame” with low-resolution, human scale posters of people taken from Google Street View. These images do not offer details, but the blurred colors and lines on the posters give a gauzy, spectral aspect to the human figures, unveiling their presence like a digital shadow haunting the real world.