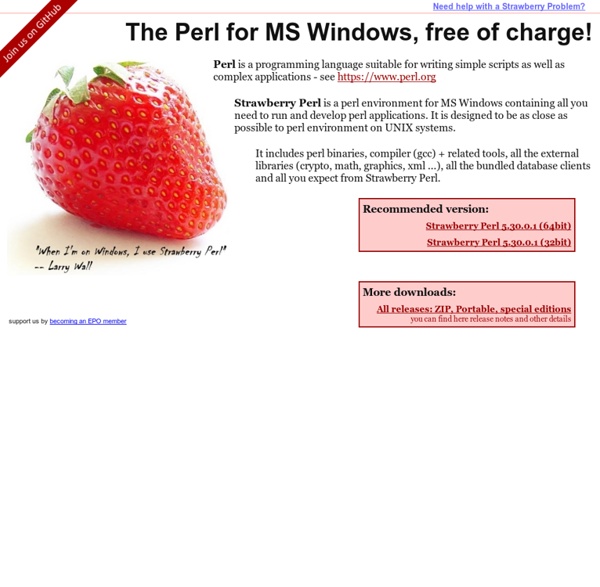 ActivePerl ActivePerl is the leading commercial-grade distribution of the open source Perl scripting language. Download ActivePerl Community Edition free binaries for your development projects and internal deployments. By downloading ActivePerl Community Edition's Perl binaries, you agree to comply with the terms of use of the ActiveState Community License. Please refer to our documentation for install/uninstall instructions. Looking for access to older versions of ActivePerl? Community Edition offers access to the newest versions of ActivePerl.Access to older versions (Perl 5.6, 5.8, 5.10, 5.12, 5.14) is available in Business Edition and Enterprise Edition. Already a Business Edition licensed user? Access your ActivePerl downloads and licenses through My Account. Deploying to the cloud?

Beginning Perl (free) - www.perl.org What does this book cover? Installing Perl on Windows and UNIX Making use of online Perl resources like CPAN First principles in programming and the Perl syntax Working with files and databases Writing web pages in Perl Using Perl as an object-oriented language Book overview Perl is a well-established programming language that has been developed through the time and effort of countless free software programmers into an immensely powerful tool that can be used on pratically every operating system in the world. "There's more than one way to do it" is the motto of Perl, but this book aims to take you through them all. Who is this book for? This book is for those new to programming who want to learn with Perl.

Visualizing Algorithms The power of the unaided mind is highly overrated… The real powers come from devising external aids that enhance cognitive abilities. —Donald Norman Algorithms are a fascinating use case for visualization. To visualize an algorithm, we don’t merely fit data to a chart; there is no primary dataset. Instead there are logical rules that describe behavior. But algorithms are also a reminder that visualization is more than a tool for finding patterns in data. #Sampling Before I can explain the first algorithm, I first need to explain the problem it addresses. Light — electromagnetic radiation — the light emanating from this screen, traveling through the air, focused by your lens and projected onto the retina — is a continuous signal. This reduction process is called sampling, and it is essential to vision. Sampling is made difficult by competing goals. Unfortunately, creating a Poisson-disc distribution is hard. Here’s how it works: Now here’s the code: The distance function is simple geometry:

Arb - a C library for arbitrary-precision ball arithmetic — Arb 2.17.0-git documentation Cygwin The Monastery Gates When I looked for magic formulae, etc., I would give up after 20 minutes! -- Jasper Unlike Jasper, I have spent more than 20 minutes searching for magic formulae. Especially ancient Roman ones. I first became aware of them back in 2006 during the Fonality Christmas Golf Challenge where I was astonished by Ton's ingenuity and deviousness in constructing his original HART (Hospelian Arabic to Roman Transform) magic formula. Shortly after the Fonality game, codegolf.com hosted an endless competition where you must convert the other way, from Roman to Decimal. To refresh your memory, the codegolf game rules were essentially: Convert a Roman numeral to its integer value. As you might expect, a key component of solutions to this game is mapping individual Roman letters to their decimal equivalents. Write a function to convert a single Roman Numeral letter to its decimal equivalent. To clarify, here's a sample (non-golfed) Perl solution: Running this program produces: The 10**21 Problem

Install Rust - Rust Programming Language Getting started If you're just getting started with Rust and would like a more detailed walk-through, see our getting started page. Windows considerations On Windows, Rust additionally requires the C++ build tools for Visual Studio 2013 or later. The easiest way to acquire the build tools is by installing Microsoft Visual C++ Build Tools 2019 which provides just the Visual C++ build tools. Alternately, you can install Visual Studio 2019, Visual Studio 2017, Visual Studio 2015, or Visual Studio 2013 and during install select the “C++ tools.” For further information about configuring Rust on Windows see the Windows-specific rustup documentation. Toolchain management with rustup Rust is installed and managed by the rustup tool. If you've installed rustup in the past, you can update your installation by running rustup update. For more information see the rustup documentation. Configuring the PATH environment variable