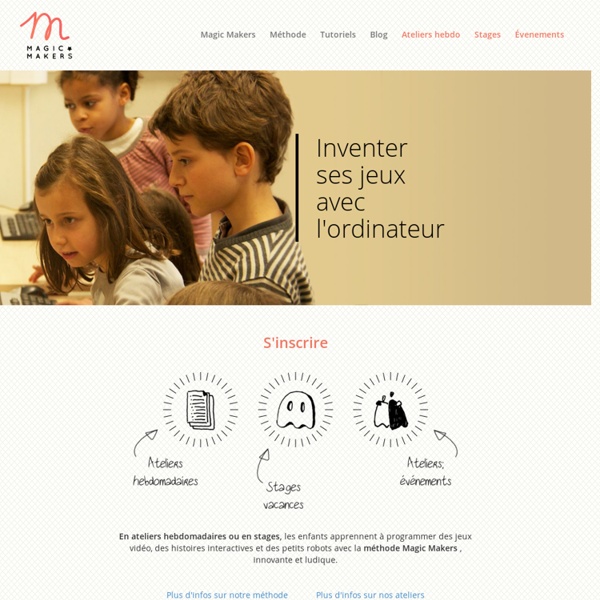 GameMaker Last updated: 02/04/2019 We (meaning YoYo Games Limited, company number 05260718) use technologies on our website and mobile services (which we'll call the Services) to collect information that helps us improve your online experience. We refer to these technologies, which include cookies, collectively as “cookies.” Elementary - NEW! WeDo 2.0 Make science come to life Your second- through fourth-graders can gain a deeper insight into science when you use WeDo 2.0 to create engaging, high impact lessons. The hands-on tools encourage pupils to get involved in science exploration by asking questions, analyzing data and communicating their findings, while the curriculum pack covers real science practices linked to the Next Generation Science Standards, including gathering evidence, carrying out investigations and designing prototypes. The core set comes with a programmable Smarthub, motor, two sensors and 280 building elements, plus software which includes one Get Started Project, delivering an introductory experience to the resource. Try the WeDo 2.0 software for free Curriculum based learning

Creative Computing 7 units44 activitiesremixing encouraged download the Scratch 3.0 version of the guide> help learnerscreate new worldswith computing download the Scratch 3.0 version of the guide 10 Squares (The 100th SDS!) Celebrate the 100th SDS with us by creating a project with 10 squares! Create a project that contains 10 squares on the screen at a time, and 10 squares only. It could be a train driving on a track, with the train made out of 7 squares, and the tracks made out of 3. It could be an Ice-cream simulator with the ice cream made out of 5 squares, and the ice cream machine made out of the other 5 squares. The possibilities are endless! Wondering why we're making things out of 10 squares?

Build Your Own Mini Mars Rover With These Brilliant, NASA-Approved Blocks The littleBits Space Kit is a box of Lego-like components that allow anyone to conduct NASA-approved experiments. littleBits You can build miniature, but functioning, versions of NASA’s famous machines like this satellite. Or a Mars rover, which uses a remote trigger module to control the robot from any remote. Here's a mini replica of the AURA satellite, which collects global observations of Earth. The Languages And Frameworks You Should Learn In 2016 Martin Angelov A lot happened in the software development world in 2015. There were new releases of popular programming languages, new versions of important frameworks and new tools. You will find a short list of the new releases that we think are the most important below, together with suggestions for the things we believe would be a great investment of your time to learn in 2016.

Coding in French - Free Printable Coding Blocks It’s a pleasure to have a guest blog post today by Ashley Soltesz, a fellow French teacher who like me is on a mission to share French resources with others so we don’t have to keep recreating the wheel! She’s made some amazing free French printable coding blocks you can use in your classrooms, enjoy! A primary goal for me as a French Language Teacher is for my students to see the relevance in learning to communicate in French, be it in Reading, Writing, or Speaking. I want my students to know that what they do in English, they can do in French and in turn, receive many opportunities because of this skill that they have. If, somewhere in the future, my students think back to the time spent in my classroom, I want them to remember that what they learned, was useful and important to them. This includes use of the French language to discuss and teach others about their interests.

Research FUSE Labs - Kodu Game Lab An overview of Kodu. (Click to play) Kodu lets kids create games on the PC and Xbox via a simple visual programming language. Kodu can be used to teach creativity, problem solving, storytelling, as well as programming. Anyone can use Kodu to make a game, young children as well as adults with no design or programming skills. Since Kodu's introduction in 2009, we have visited the White House, teamed up with great groups like NCWIT and DigiGirlz, inspired academic research and been the subject of a book (Kodu for Kids). ScratchX What is ScratchX? ScratchX is a platform that enables people to test experimental functionality built by developers for the visual programming language Scratch. What's the difference between Scratch and ScratchX? Scratch is a programming language and online community where you can create your own interactive stories, games, and animations. ScratchX is a separate experimental platform built to test experimental Scratch features, also known as Experimental Extensions.

Xamarin for Visual Studio - Build native mobile apps in C# for iOS, Android, Mac and Windows - Xamarin Directly edit storyboards Double-click a storyboard file to edit it in the IDE. Drag-and-drop controls to build screens, name controls to create fields, and double-click to add handlers without switching to Xcode. More accurate than Xcode View controllers and controls are a pixel-perfect representation of screens as they will appear when running on iOS devices. Learn to Code Menu If you would like to see my video tutorials using Scratch, click here to access my YouTube channel. Primary: Junior: Intermediate+: Getting Started Checklist To use the gogoboard, you should have the following things ready. A GoGo Board together with a USB cable. Batteries or power adapter if using motors. Although the gogoboard can be powered via the USB cable, it is not recommended for use with motors, as the USB port provides only limited power.Some sensors and/or motors.Construction materials such as cardboard paper, wood, ice-cream sticks, string, etc.A computer running any recent version of Windows (Windows 2000 and older have not been tested). Connecting to the GoGo Board for the first time

Picademy - Free Professional Development from Raspberry Pi Picademy is the Raspberry Pi Foundation’s FREE teacher training initiative. Our goal is to give educators the experience and tools they need to teach computing with confidence. Why Picademy? Getting started with the computing curriculum can be daunting. There’s a host of hardware and programming languages, and an array of technical terminology. However, the barrier to getting started is rarely technical proficiency or programming knowledge.